Armavir (Armenian: Արմավիր) is a city located in western Armenia. The 1989 census reported that the city had a total population of 46,900, but this has declined considerably: the 2001 census counted 32,034; estimate for 2008 is 26,387. It is the capital of the Armavir province (marz). The city of Armavir in Russia, founded by Armenians in the 19th century, was named after this city. The city was known as Hoktemberyan, Hoktemberian, or Oktemberyan Armenian: Հոկտեմբերյան during the Soviet era up to 1992, and Sardarabad, Sardarapat or Sardar-Apad before 1932.

Armavir was inhabited from the 5th-6th millennium B.C. onwards. Various obsidian instruments, bronze objects and pottery have been found from that period. Armavir was regarded as an old capital of Armenia, said to have been founded by King Aramais in 1980 B.C. King Argishti I of Urartu built a fortress in the area and named it Argishtikhinili.[1] In 331 B.C., when Armenia reasserted its independence under the Orontid Dynasty from the Achaemenid Empire, Armavir was chosen as the capital of Armenia. Slabs of clay have been found from the Achaemenid period written in the Elamite language concerning episodes of the Gilgamesh epic. Various inscriptions in Hellenistic Greek carved around the third century B.C., include poetry from Hesiod, lines from Euripides, a list of Macedonian months, and names of Orontid Kings.

According to the Armenian historian Movses Khorenatsi (fifth century A.D.), Armavir was the first capital of the kingdom of Armenia (although, from a geographical standpoint, the first capital of Armenia was Van).[2] Movses has preserved the tradition that when King Vagharshak the Parthian settled in Armavir (ca. 149 B.C.), he built a temple there and asked his royal coronant and aspet (knight) Shambu Bagarat (Bagratuni), to give up his religion and worship idols.[3] But Shambu refused to comply. Movses also relates that when King Tigranes II (whom he places on the throne from 90-36 B.C.), in order to take revenge on Queen Cleopatra of Egypt, sent an expedition to Palestine, he carried a great number of Jews into captivity, and settled them in Armavir and in Vardges.[4] Movses goes on to state that later Jews were transferred from Armavir to Yervandashat; and under King Artashes I, were again transferred into the new capital Artashat.[5] When King Sapor II of Persia invaded Armenia (360-370 A.D.), he led away from Artashat 30,000 Armenian and 9,000 Jewish families, the latter brought by King Tigranes from Palestine, and then completely destroyed the city.[6]

During Antiquity, Armavir was taken by the Seleucids, Parthians, Roman Empire, Sassanids and Byzantine Empire before it was taken over by the Arabs in 645.

Kara Koyunlu's sovereignty lasted until Uzun Hasan, ruler of Ak Koyunlu, conquered it in 1468. Ak Koyunlu's sovereignty lasted until 1501, Ismail I's conquest. Ismail I was founder of Safavid Dynasty. This region was temporarily occupied by Ottoman Empire in 1514, in 1534, in 1548 and in 1553. It was then conquered by Ottoman Empire in 1585 but retaken by Abbas I of Persia who was Safavid ruler in 1603. It was occupied by Ottomans between 1635–1636 and 1724–1736. At the fall of the Safavid Empire, Armavir became part of the Erivan Khanate. 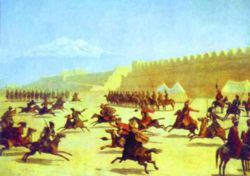 Trick Riding of Kurds and Tatars in front of the Fortress Sardarabad in Armenia, a mid-19th century painting by the Russian artist Grigory Gagarin, who was there as a soldier.

The Russo-Persian War (1826-1828) began due to Persian demand to reconquer the territories lost to Russia between 1804 and 1813. At first, the Persians repulsed the Russians from the South Caucasus in 1826. However, Russian general and commander of the Russian army, Ivan Paskevich, reconquered South Caucasus and extended its territories to include the Erivan Khanate in 1827.

This region formally passed from Persian to Russian sovereignty after the Treaty of Turkmenchay in 1828. Armavir became the Sardarabad uyezd of the Armenian Oblast, which itself became the Erivan guberniya in 1840. This situation lasted until the February Revolution in 1917.

After the February Revolution, the region was under the authority of Special Transcaucasian Committee of the Russian Provisional Government and subsequently the short-lived Transcaucasian Democratic Federative Republic. When the TDFR was dissolved in May 1918, this region passed to Democratic Republic of Armenia, having a conspicuous role in Armenian history due to Battle of Sardarapat. There, the Armenian forces staved off extermination and repulsed the Ottoman Army whose campaign in the Caucasus was aimed at occupying Yerevan.

However, the Ottomans did occupy most of the Erivan Governorate, forcing the Armenians to sign the Treaty of Batum in June 1918. The Ottoman Army retreated after signing Armistice of Mudros at the end of 1918 and so Sardarapat returned to Democratic Republic of Armenia in November 1918. 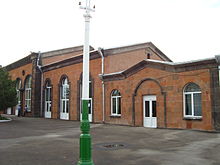 The Soviet Union's 11th Red Army invaded the republic on 29 November 1920. The Soviets took Yerevan 4 December 1920 after the signing of Treaty of Alexandropol. This treaty was replaced by Treaty of Kars. The Soviets proclaimed Armenian a Soviet Socialist Republic under the leadership of Aleksandr Miasnikyan. It was to be included into the newly created Transcaucasian Soviet Federated Socialist Republic in 1922.

The modern city of Armavir was founded by the Soviet government on 26 July 1931 and called Sardarapat. In 1935, the name of the city was changed from Sardarapat to Hoktemberyan (also known as Oktemberyan).

Two years after Armenia declared independence from the USSR, in 1992, the name of the city was reverted back to Armavir.

FC Armavir was the football club who represented the city during the Soviet years. It was founded in 1965 as FC Sevan Hoktemberian Armavir. After the collapse of the Soviet Union, FC Armavir participated in the Armenian Leagues mainly throughout the 1990s. Since 2003, the club has not been playing professional football and is currently inactive. The club used to play its matches in the "Hobelyanakan Stadium of Armavir" (Jubilee Stadium) with a capacity of 10,000 spectators. Nowadays, the stadium serves the youth teams of Armavir football school.

The city has a chess-training school as well, for the children.