Bradley J. "Brad" Sherman (born October 24, 1954) is an American politician. He has been a Democratic member of the United States House of Representatives since 1997, representing California's 27th congressional district. 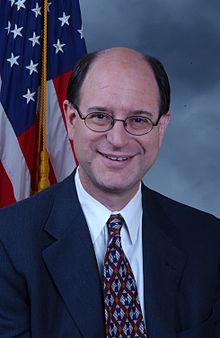 Congressman Sherman’s public service career includes serving on the California State Board of Equalization from 1991 to 1996. He was Chairman of the Board from 1991 to 1995.,[8] Before joining Congress, Sherman was on staff at one of the nations’ big-four CPA firms. While at the firm, he audited large businesses and governmental entities, provided tax law counsel on multi-million dollar transactions, advised entrepreneurs and small businesses on tax and investment issues, and helped represent the Government of the Philippines under President Aquino in a successful effort to seize assets of deposed President Marcos[9]. Sherman was also an instructor at Harvard Law School’s International Tax Program.[10]

Congressman Sherman has earned a 100% rating from the Sierra Club [12] and the League of Conservation Voters [13] – two of the oldest, largest, and most influential grassroots environmental organization in the United States.

Serving on the House Budget Committee in 1997, Congressman Sherman authored the Sherman Amendment to the Budget Resolution providing an additional $700 million for the acquisition of environmentally important lands in FY ‘98.[14] The Sherman Amendment was included in the Joint Budget Resolution and effectuated by a $699 million appropriation. Sherman also secured $20 million to acquire land and to complete the Backbone Trail System through the Santa Monica Mountains National Recreation Area.

During the debate over the Emergency Economic Stabilization Act of 2008, Sherman was an early and outspoken critic of the proposal, leading the House revolt against the bailout bill, a move which made him "spectacularly unpopular with both the Republican and Democratic leaderships, not to mention K Street."[15] Sherman argued that Bush and his advisors had created a panic atmosphere in an effort to get lawmakers to rubber-stamp the bill.[16]

In August 2010, Sherman introduced legislation aimed at rescinding China's Most Favored Nation status as long as there was not "a more level playing field between our two nations".[17] He said that "the U.S. – China trade relationship is horrendously lopsided".[17]

In September 2010, Sherman introduced legislation designed to close loopholes for U.S. companies with subsidiaries operating in Iran. He has also sought legislative measures to curtail U.S. funding of international organizations providing loans to Iran. "We must continue to enact tougher sanctions to isolate Iran economically and diplomatically, and we must act now," Sherman said.[18]

Sherman is a member of the Jewish faith. For many years Congressman Sherman and his wife Lisa have been members of Valley Beth Shalom, a conservative synagogue in Encino, California.

In 2006 Congressman Sherman was married to Lisa Kaplan by the senior Rabbi of Valley Beth Shalom, Rabbi Eddie Feinstein.

Sherman's Los Angeles district lies within a Scientology stronghold, and he attended the Church of Scientology's reopening in Washington, DC in October 2009.[19][20] Speaking about the importance of religious freedom, he praised the church's work in support of that aim.[20][19] Sherman has been described as "[one] of the church's best friends currently serving in Congress," and was "honored at a 2004 Celebrity Centre gala" featuring famous Scientologists such as John Travolta and Kelly Preston.[21]

Sherman has been a strong supporter and advocate of the U.S-Israel relationship, consistently backing US aid to Israel. [22]

In 2004, Brad Sherman first [23] introduced the U.S.-Israel Energy Cooperation Act. The Act was passed into law as Section 917 of the Energy Independent and Security Act of 2007.[24] The U.S.-Israel Energy Cooperation Act now funds joint U.S. and Israeli research programs in the areas of alternative energy sources and energy efficiency. It provides grant money to joint ventures between American and Israeli academics and private sector companies that conduct research and develop energy-efficient and alternative energy technologies.

Congressman Sherman is a strong supporter of LGBT rights and an advocate of equality. He has worked in congress to end discrimination against the LGBT community, and he has consistently earned a 100% rating from The Human Rights Campaign [25] - the United States' largest LGBT advocacy group.

Congressman Sherman is pro-choice. He has earned a 100% rating from NARAL [26] and Planned Parenthood [27]

Congressman Sherman has worked to control the sale of guns designed to penetrate bullet proof vests. He was a sponsor of the Protect Law Enforcement Armor (PLEA) Act [28]. Sherman has received a 100% rating from The Brady Campaign to Prevent Gun Violence[29]

Sherman has held over 100 Town Hall meetings since being elected to Congress.[32]