The Brown-headed Cowbird (Molothrus ater) is a small brood parasitic icterid of temperate to subtropical North America. They are permanent residents in the southern parts of their range; northern birds migrate to the southern United States and Mexico in winter, returning to their summer habitat around March or April.[1]

They resemble New World orioles in general shape but have a finch-like head and beak. The adult male is mainly iridescent black with a brown head while the adult female is grey with a pale throat and fine streaking on the underparts.

They occur in open or semi-open country and often travel in flocks, sometimes mixed with Red-winged Blackbirds (particularly in spring) and Bobolinks (particularly in fall), as well as Common Grackle or European Starlings.[1] These birds forage on the ground, often following grazing animals such as horses and cows to catch insects stirred up by the larger animals. They mainly eat seeds and insects.

Before European settlement, the Brown-headed Cowbird followed bison herds across the prairies. Their parasitic nesting behaviour complemented this nomadic lifestyle. Their numbers expanded with the clearing of forested areas and the introduction of new grazing animals by settlers across North America. Brown-headed Cowbirds are now commonly seen at suburban birdfeeders. 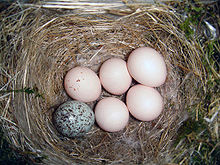 This bird is a brood parasite: it lays its eggs in the nests of other small passerines (perching birds), particularly those that build cup-like nests. The Brown-headed Cowbird eggs have been documented in nests of at least 220 host species, including hummingbirds and raptors.[2][3] The young cowbird is fed by the host parents at the expense of their own young. Brown-headed Cowbird females can lay 36 eggs in a season. More than 140 different species of birds are known to have raised young cowbirds.[4]

Unlike the Common Cuckoo, it has no gentes whose eggs imitate those of a particular host.

Some species, such as the House Finch feed their young a vegetarian diet. This is unsuitable for young Brown-headed Cowbirds, meaning almost none survive to fledge.[6]

It seems that Brown-headed Cowbirds periodically check on their eggs and young after they have deposited them. Removal of the parasitic egg may trigger a retaliatory reaction termed "mafia behavior". According to a study by the Florida Museum of Natural History published in 1983, the cowbird returned to ransack the nests of a range of host species 56% of the time when their egg was removed. In addition, the cowbird also destroyed nests in a type of "farming behavior" to force the hosts to build new ones. The cowbirds then laid their eggs in the new nests 85% of the time.[7]