Marsupilami is a fictional comic book species created by André Franquin, first published on 31 January 1952 in the magazine Spirou.[1] Since then it appeared regularly in the popular Belgian comic book series Spirou et Fantasio until Franquin stopped working on the series in 1968 and the character dropped out soon afterward. In the late 1980s, the Marsupilami got its own successful spin-off series of comic albums, Marsupilami, written by Greg, Yann and Dugomier and drawn by Batem, launching the publishing house Marsu Productions. Later, two animated shows featuring this character, as well as a Sega Genesis video game and a variety of other merchandise followed. The asteroid 98494 Marsupilami is named in its honour.

The name is a portmanteau of the words marsupial, Pilou-Pilou (the French name for Eugene the Jeep, a character Franquin loved as a kid) and ami, French for friend.

Marsupilami's adventures had been translated to several languages, like Dutch, German, Spanish, Portuguese and several Scandinavian languages. More than three million albums of the Marsupilami series are claimed to have been sold by Marsu Productions.[2]

One album of Spirou and Fantasio featuring Marsupilami, number 15, was translated to English by Fantasy Flight Publishing in 1995, although it is currently out of print. Plans on releasing number 16 ended halfway through the translation process, due to bad sales. In 2007, Egmont's subsidiary Euro Books translated albums number 4, 5, 7, 8, 9, 10, 11 and 14 for the Indian market.

The marsupilami is a black-spotted yellow monkey-like creature.[3] Male marsupilamis have an incredibly long, strong, flexible and prehensile tail which can be used for almost anything. Female marsupilamis have a much shorter tail, but still long compared to real animals. Unlike the males, the females also walk on the tips of their toes. When the animal rebounds, he makes a funny noise: "Boing". Males also have eyes that are not completely separate while females have two separate eyes. Female marsupilamis also have a totally different voice than the males. Males say "houba" most of the time, while females say "houbii", which means the same thing as houba, but sounds more feminine.

"The Marsupilami" refers originally to the individual captured and then adopted by Spirou and Fantasio, which they never bothered to name because he was the only known specimen. The Spirou et Fantasio album Le nid des Marsupilamis is mostly concerned with a documentary-within-the-comic about the life of a family of marsupilamis still living in the wild in Palombia. The spin-off comics later drawn by Batem star those, and the title of the series now refers to the - also unnamed - father in this family, and not to Spirou's original Marsupilami.

In these series, Marsupilami's wife is referred to as Marsupilamie (a female version of the name) but their three young are named, respectively, Bibi, Bibu and Bobo. Mars le noir (Mars the Black) is another specimen, which first appears in the album Mars le Noir. A former captive marsupilami, he first finds it hard to live again in the forest. After failing to seduce Marsupilamie, he becomes jealous of Marsupilami and nearly gets into a fight with him. Later, he meets a black female marsupilami, named Vénus, who becomes his mate. In Baby Prinz, another specimen, an elderly male who lives in a zoo, is featured. Altogether, that comes to eight specimens in Palombia, plus Spirou and Fantasio's pet. Marsupilamis can come in colours of yellow, yellow with black spots, dark blue, white, white with black spots, and dark blue with yellow spots.[citation needed] Only the yellow, yellow with black spots and dark blue marsupilami's show up in cartoon. 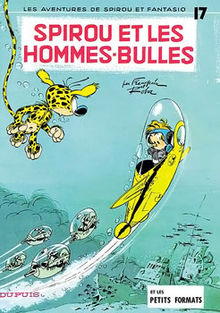 These albums of Spirou and Fantasio feature the Marsupilami

As well as the Marsupilami who lived with Spirou and Fantasio in many of the strips drawn by Franquin, there was another who still inhabited the wild Palombian jungle along with a mate and children. The family first featured in 1957 in the Spirou adventure Le nid des Marsupilamis (French for "The Nest of the Marsupilamis"), in which Seccotine, a journalist and rival to Fantasio, made a documentary about the life of the marsupilamis in the wild: courting, starting a family and feeding and protecting the youngsters from predators.

By the late 1960s, Franquin decided to pass the Spirou et Fantasio strip on to a new artist Jean-Claude Fournier. Franquin held the rights to the Marsupilami and would not agree to let the creature appear in any more of the Spirou et Fantasio stories. Fournier came up with a story called Le faiseur d'or ("The Gold Maker") in which the Marsupilami played an important part. Franquin agreed to this last appearance, provided that he draw the pictures of the creature himself.[4] Since then, however, the Marsupilami has never re-appeared in his strip of origin (though he can be seen as a stuffed toy in the Spirou adventure Virus, published in 1982). 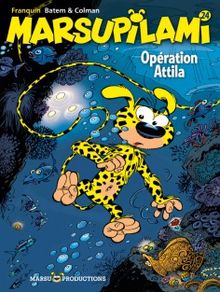 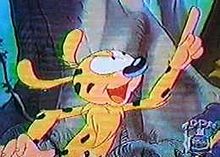 Marsupilami: "Where is Maurice? That big gorilla is supposed to drop in....

Disney's version of the Marsupilami first appeared on television in Raw Toonage in 1992, and was then spun off into his own eponymous show on the CBS network. Marsupilami's supporting characters included Maurice the gorilla, Stewart the elephant, Eduardo the jaguar, Leonardo the lion, Norman the poacher, and other characters. The original Marsupilami stories by Franquin never encountered a gorilla or elephant, since these species are native to Africa, while the marsupilami in the comic was said to come from South America (However, in the album "Le dictateur et le champignon", the Marsupilami escapes from his cell on a boat with a gorilla). Another change is Marsupilami can speak in difference to his comic counterpart that can only mimic sound like a parrot. In this version, Marsupilami is voiced by Steve Mackall. Schnookums and Meat was a secondary segment on this show.

There were twenty-three episodes in the series, and the series lasted one season. Reruns of the show were aired on both Disney Channel and Toon Disney.

Animators Tony Bancroft and Mike Surrey is in the character design ending credits.

A second series, this time produced in France, premiered in March 2000 and ran for 26 episodes[7] in France's Canal J. Produced by Cactus Animation, Marathon Production & Marsu Productions, this series more closely followed the character in the original comic.

In this first season, Marsupilami lived adventures alone or with his family (his wife Marsupilamie and their three young, Bibi, Bibu and Bobo). For example, in one episode he saved a group of circus animals, got them back to the city and saved the circus from closing. In another, he had to go to the city again to save one of his young, captured by their constant enemy, the hunter Bring M. Backalive.

In the 15 episode[8] second season, called Mon ami Marsupilami (translated as My friend Marsupilami in the Disney Channel version), Marsupilami and his family become best friends with a human family, the Du Jardin, that comes to live near them. Amanda is a Marsupilami researcher, while her husband Jean-Pierre is a computer technician that works from home and they have two children, Teo (Leo in the Disney Channel version) and toddler Zoe. Leo and Marsupilami become best friends and they have lots of adventures, with both new friends and old enemies, like Backalive.

The third series, started in 2009, features young Hector and his aunt Diane, who are going to live in the jungle for one year to study its fauna and flora. They become the best friends with the Marsupilami family. Their main enemies are megalomaniac industrialist and jungle-hater Felicia Devort, who plans to level out the Palombian jungle and build the Devort City megalopolis in its place, and her two henchmen, Stroy and Blouprint.[9] Their old enemy, hunter Bring M. Backalive, also appears.

A fifth season is in preparation.[10]