The Sultanate of Demak was Javanese Muslim state located on Java's north coast in Indonesia, at the site of the present day city of Demak. A port fief to the Majapahit kingdom thought to have been founded in the last quarter of the 15th century, it was influenced by Islam brought by Arab and Gujarat traders. The sultanate was the first Muslim state in Java.

Despite its short period, the sultanate played an important role in the establishment of Islam in Indonesia, especially on Java and neighbouring area.

Demak’s origins are uncertain although it was apparently founded in the last quarter of the fifteenth century by a Muslim, known as Raden Patah (from Arabic name: "Fatah", also called "Pate Rodin" in Portuguese records, or "Jin Bun" in Chinese record). There is evidence that he had Chinese ancestry and perhaps was named Cek Ko-po.[1]

Raden Patah’s son, or possibly his brother, led Demak’s brief domination in Java. He was known as Trenggana, and later Javanese traditions say he gave himself the title Sultan. It appears that Trenggana had two reigns—c 1505–1518 and c 1521–1546—between which his brother in law, Yunus of Jepara occupied the throne.[1]

Before emergence of Demak, northern coast of Java was seat of many Muslim communities, both foreign merchants and Javanese. The islamisation process gained momentum from decline of Majapahit authority. Following fall of Majapahit capital to usurper from Kediri, Raden Patah declared Demak indepence from Majapahit overlordship so did nearly all northern Javanese ports.[2] 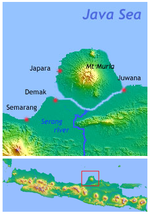 Demak and nearby ports. With approximate coastline when Muria and Java still separated.

Demak was a busy harbor with trade connection to Malacca and the Spices islands. It was located at the end of a channel that separated Java and Muria Island (the channel is now filled and Muria joined with Java). In 15th century until 18th century, the channel was wide enough and important waterway for ships traveling along northern Javanese coast to the Spices islands. In the channel ia also located Serang river, which enabled access to rice producing interior of Java. This strategic location enabled Demak to rise as a leading trading centre in Java.[3]

According to Tome Pires, Demak had more inhabitants than any port in Sunda or Java. Demak was the main exporter of rice to Malacca. And with the rise of Malacca, so did Demak rise into prominence. Its supremacy also enhanced with claim of direct decent of Raden Patah to Majapahit royalty and his marriages ties with neighboring city-states.[3]

Foundation of Demak traditionally attributed to Raden Patah (1475–1518), a Javanese nobility related to Majapahit royalty. At least one account stated that he was son of Kertabhumi, who reigned as king Brawijaya V of Majapahit (1468–1478). Demak manage consolidate its power to defeat Daha in 1527 because it is more accepted as legitimate successor of Majapahit. The reason of this acceptance is because Raden Patah was direct descendant of Kertabhumi who survived the Girindrawardana invasion of Trowulan in 1478.

Chinese chronicle in temple of Semarang states that Raden Patah founded town of Demak in marshy area to the north of Semarang. After the collapse of Majapahit, its various dependencies and vassals broke free, including northern Javanese port towns like Demak.[4]

The new state derives its income by trade: importing spices and exporting rice to Malacca and the Maluku Islands. He managed to gain hegemony on other Javanese trading ports in northern coast of Java such as Semarang, Jepara, Tuban, and Gresik.[5]

Supremacy of Raden Patah was illustrated by Tome Pires," ... should de Albuquerque make peace with the Lord of Demak, all of Java will almost be forced to make peace with him... The Lord of Demak stood for all of Java".[6] Apart from Javanese city-states, Raden Patah also gained overlordship of ports of Jambi and Palembang in eastern Sumatra, from which produced commodities such as lignaloes and gold.[6] As most of its power is based on trade and control of coastal cities, Demak can be considered as a thalassocracy. 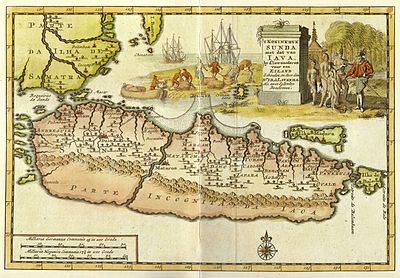 Raden Patah was succeeded by his brother-in-law Pati Unus or Adipati Yunus (1518–1521). Before it, he was a ruler of Jepara, a vassal state to the north of Demak. He was known for his two attempts in 1511 and 1521 to seize the port of Malacca from the control of Portuguese.

In Suma Oriental, Tomé Pires refer to him as "Pate Onus" or "Pate Unus", brother in-law of "Pate Rodim" (Raden Patah), the ruler of Demak. During the invasions he managed to mobilise vessels from Javanese coastal cities to Malay Peninsula. Javanese ports turned against Portuguese for a number of reason, the major of them is opposition to Portuguese insistence on monopoly of spices trade. The invasion fleet cosisted around one thousand vessels, but this was repulsed by the Portuguese. The destruction of this navy proved devastating to the Javanese ports, who although somewhat recovered, unable to respond properly when next colonial power came, the Dutch.

This campaign attempt ended with failures and loss of the King's life. He was later remembered as Pangeran Sabrang Lor or the Prince who crossed (the Java Sea) to North (Malay peninsula).

After the death of Pati Unus, the throne was contested between his brothers; Raden Kikin and Raden Trenggana. According to tradition, Sunan Prawoto, the son of Prince Trenggana, stole Keris Setan Kober, a powerful magical kris from Sunan Kudus, and used it to assassin his uncle Raden Kikin by the river, since then Raden Kikin also referred to as Sekar Seda Lepen (flower that fell by the river). Raden Trenggana rise as Sultan. The Pati Unus' brother-in-law, Trenggana (1522–1548), crowned by Sunan Gunungjati (one of the Wali Songo), became the third and the greatest ruler of Demak. He conquered the Hindu based resistance in Central Java.

Following discovery of news of Portuguese-Sunda alliance, he ordered invasion to Banten and Sunda Kelapa ports of kingdom of Sunda at 1527 (Sunda Kelapa was later renamed Jayakarta). From this territories he created sultanate of Banten as vassal-state under Hasanudin, son of Gunungjati.

Trenggana spread Demak’s influence eastward and during his second regin, he conquered the last Javanese Hindu-Buddhist state, the remnants of Majapahit. Majapahit had been in decline since the later fifteenth century and was in an advanced state of collapse at the time of the Demak’s conquest,[1] it not real Majapahit which defeated by Sultan Trenggana since it created by Girindrawardhana after he defeat Kertabumi and raze Trowulan into ground. Majapahit's heirlooms were brought to Demak and adopted as Demak's royal icons.[citation needed] Demak was able to subdue other major ports and its reach extended into some inland areas of East Java that are not thought to have been Islamised at the time. Although evidence is limited, it is known that Demak's conquests covered much of Java: Tuban, an old Majapahit port mentioned in Chinese sources from the eleventh century, was conquered c. 1527;

His campaign ended when he was killed in Panarukan, East Java in 1548.

The death of the strong Trenggana sparked the civil war of succession between the King's son, Prince Prawoto; and Arya Penangsang the son of late Sekar Seda Lepen (Raden Kikin). Prawoto son of Trenggana ascend to throne as the new Sultan of Demak. However, Arya Penangsang of Jipang with the help of his teacher, Sunan Kudus, took revenge by sending an assassin to kill Prawoto using the same kris. Prawoto younger sister Ratu Kalinyamat seeks revenge on Penangsang, since Penangsang also murdered her husband. She urged her brother in-law, Hadiwijaya (popularly known as Joko Tingkir), Lord of Boyolali, to kill Arya Penangsang.

Arya Penangsang soon faced heavy opposition from his own vassals due to his unlikeable character, and soon was dethroned by a coalition of vassals led by Hadiwijaya, Lord of Boyolali, who had kinship with the King Trenggana. Hadiwijaya sent his adopted son and also his son in-law Sutawijaya, who would later become the first ruler of the Mataram dynasty, to kill Penangsang.

Hadiwijaya assumed the role as the King but he moved all the Demak heirlooms and sacred artifacts to Pajang, then he ended the Demak history when he founded his new kingdom: the short-lived Kingdom of Pajang.

Later Javanese chronicles provide varying accounts of the conquest, but they all describe Demak as the legitimate direct successor of Majapahit although they do not mention the possibility that by the time of its final conquest, Majapahit no longer ruled. The first 'Sultan' of Demak, Raden Patah, is portrayed as the son of Majapahit's last king by a Chinese princess who was exiled from the court before Patah's birth.

The chronicles conventionally date the fall of Majapahit at the end of the fourteenth Javanese calendar (1400 Saka or 1478 AD), a time when changes of dynasties or court was though to occur. Although these legends explain little about the actual events, they do illustrate that the dynastic continuity survived Islamisation of Java.