Born in Tehran, Iran, Rosie Malek-Yonan is a descendant of one of the oldest and most prominent Assyrian families, tracing her Assyrian roots back nearly 11 centuries. The Malek family or tribe came from the Assyrian village of Geogtapah, Urmi (also known as Urmia), a region in northwestern Iran.[1] Geogtapa was the largest Assyrian Christian village in the region and much of it belonged to the Malek-Yonan family with the oldest plot in the family graveyard dating back to 1,100 CE.[2]

Rosie's father, George Malek-Yonan (born 1924), an international attorney in Iran, was personally responsible for negotiating and procuring a seat for the Assyrians as a recognized Christian minority in the Iranian Parliament or Majlis of Iran. This was a huge accomplishment for a people who had been without a formal country since the fall of the Assyrian Empire.[3]

Rosie's mother, Lida Malek-Yonan[4](1928–2002) regarded as an activist and humanitarian, was equally influential in demanding recognition for Assyrian women in Iran by launching and presiding over the Assyrian Women's Organization which was the only officially recognized charter member of the Iranian Women's Association up until the end of the Pahlavi Dynasty.[5][6]

During the Assyrian Genocide of 1914–1918, Rosie's grandparents left their ancestral homeland in Urmi, Iran, during the Great Exodus from Urmi. The Malek-Yonan family fled to Mesopotamia where her father was born in Baghdad, while Rosie's maternal grandmother fled to Russia where her mother was born in Rostov. Years later, both families returned to Tehran where her parents met and were married.[7][8] Rosie has a younger sister, Monica, who works very closely with her on most of her projects.

Rosie is trilingual and speaks Assyrian, Persian and English fluently. 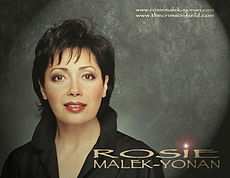 Rosie Malek-Yonan is a classically trained pianist, composer, actress, director, writer, documentary filmmaker and activist.[5][9] She began studying piano at the age of four and while still in her teens, competed in and won many national piano competitions in Iran and attended the Tehran Conservatory of Music.[10] In 1972 after winning a national piano competition in Iran, she was invited by Queen Farah Pahlavi to play at a Command Performance.[10]

Upon receiving her L.C. degree in English from the University of Cambridge, she studied classical piano with Saul Joseph at the San Francisco Conservatory of Music, and acting with Ray Reinhardt at the American Conservatory Theatre. A graduate of San Francisco State University with two degrees in Music, she won an invitation to study drama at the American Academy of Dramatic Arts[11] and the historic Pasadena Playhouse. Her plays have been produced an d performed on stage. In 2008 Malek-Yonan’s one woman play, An Assyrian Exodus previewed in Hartford, Connecticut. The work is based on true family diaries written during the 1918 Great Exodus from Urmia, Iran. About the production, Janey Golani, of The Assyrian Star writes, "…presentations included those of Ms. Rosie Malek-Yonan which was filled with many emotional attendees who were struck by her performance of "An Assyrian Exodus" a dramatic staged reading based on Rosie's Family Diaries."[12][13]

Reviewing Malek-Yonan's work as an actor and director, Martin Hernandez of LA Weekly writes, "Superbly acted and directed...Director Rosie Malek-Yonan honed the works to perfection, even down to the fitting choice of songs for transitions and intermission."[14] About her stage directing, Bruce Feld writes, "Rosie Malek-Yonan has done an excellent job directing...top-of-the-line and what might have become a sketch in other hands becomes a poignant episode of universal import...exceptional direction.".[15] In another review, Feld wrote, "Very well directed by Rosie Malek-Yonan...The material is very tricky, but Malek-Yonan handles it with requisite sensitivity, without in any way watering down the heavy conflict...Sparks ignite..."[15]

Malek-Yonan made her television debut in 1983 on Aaron Spelling's television series, Dynasty,[16] followed by a national commercial for AT&T where she spoke in Assyrian. She has since appeared in numerous notable television shows, films and plays, acting in a wide range of roles opposite many of Hollywood's leading actors. She has had recurring roles on Days of Our Lives, Chicago Hope, Beverly Hills, 90210, The Young and the Restless and in 2008 she joined the cast of ABC's General Hospital as Farah Mir.[17][18][19][20] On Star Trek: Deep Space Nine she was Tekoa.[21][22][23] She has guest starred on such shows as Generations, Seinfeld, Life and JAG. She played the role of Nuru Il-Ebrahimi, opposite Reese Witherspoon in New Line Cinema's Rendition, directed by Oscar winning director Gavin Hood. The film premiered at the Toronto International Film Festival.[24][25]

Rosie Malek-Yonan is an outspoken advocate of issues concerning her nation, in particular bringing attention to the Assyrian Genocide as well as the plight of today's Assyrians in the Middle-East since the 2003 invasion of Iraq by the United States and its Coalition Forces.[26] She has candidly criticized the U.S. for failure to protect the Christians in Iraq since the beginning of the 2003 Invasion of Iraq.[27] In an interview with The New York Times Malek-Yonan said, "Anytime the Western countries go to war in the Middle East, it becomes a religious war…" In the interview she also held Kurdish commanders in Iraq responsible for "depriving the Christians of security in an effort to tilt the demographics in favor of Kurds. The expected result, she said, was an exodus of hundreds of thousands of Christians from Iraq. At least hundreds have been killed. One priest was quartered and beheaded."[28][29][30] 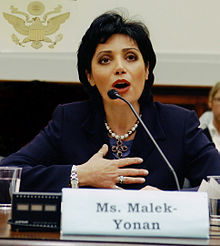 On June 30, 2006, Rosie Malek-Yonan, was invited to testify on Capitol Hill before a Congressional Committee[31][32] of the 109th Congress on religious freedom regarding the genocide, massacres and persecution of Assyrians in Iraq since the beginning of the 2003 Iraq War. Reading from her epic and historical book, she compared the Assyrian Genocide of 1914-1918, as depicted in The Crimson Field,[8] to the current plight of the indigenous Assyrian Christians in Iraq. Her 30 minute passionate testimony and plea to the U.S. government, ultimately prompted Congressman Christopher Smith (R-NJ)[33] to travel to war-torn Iraq to witness matters for himself. While in Iraq, after meeting with local Assyrians, he turned in Malek-Yonan's in depth report to U.S. Officials in Iraq. One year later, a Congressional appropriations subcommittee voted to send $10 million to aid the Assyrians in Iraq.[34] The complete archived transcript and webcast of the actual Congressional Testimony is available at the website of the U.S. House of Representatives.[35][36][37]

Monica Malek-Yonan's documentary film, My Assyrian Nation on the Edge,[38][39] based on Rosie Malek-Yonan's Congressional Testimony was released September 2006 (ISBN 0-9771873-0-6) in English. The film is released in Europe with French, German, Swedish and Dutch subtitles (ISBN 978-0-9771873-31). The Australian Premiere was on 7 August 2008, at the Australian Parliament of New South Wales in Sydney.

In 2008 Malek-Yonan addressed the topics of genocide, world peace and in particular the Assyrian Genocide in statements presented at the British House of Lords on 12 March and on 24 April at the House of Commons of the United Kingdom.[40]

On 5 October 2008, Malek-Yonan spoke on behalf of the Assyrian nation in Iraq at a Los Angeles rally held in front of the Federal Building to oppose the Iraq Election Law. She addressed the crowd of demonstrators and the media voicing her opposition at the removal of article 50 and its consequences for the minorities in Iraq in particular the Assyrians. "Democracy in Iraq will fail if it does not treat all members of its society equally under the law." She went on to say, "Assyrians have already paid a heavy price since the beginning of the Iraq War. The liberation of Iraqis must encompass all its citizens, including the Assyrians, and not just the Sunni, the Shi'ites and the Kurds.[41][42]

Malek-Yonan is frequently interviewed on television and radio programs worldwide[43][44] giving her assessment of the current situation of the Assyrians in the Middle-East as well as discussing the topic of the hotly debated Assyrian Genocide.[45][46][47][48]

Malek-Yonan’s articles are published globally and translated into many languages.[49][50][51] She is a public speaker[52][53] and is often invited to lecture about the Assyrian Genocide.[54] On 24 February 2007, Malek-Yonan was a keynote speaker at an open forum in Anaheim, California, discussing the persecution of the Copts and the plight of Christians in the Middle-East.[55] She has lectured at University of Berkeley,[56] University of California at Merced,[57] and Woodbury University among others.[58]

On 20 December 2010, Malek-Yonan, was invited by the Simon Wiesenthal Center Museum of Tolerance to speak at a press conference to address the escalating crisis and the deadly attacks on the Assyrians in Iraq.[59] Later in an interview with Fox News, Malek-Yonan described how going to church is a game of Russian Roulette for the Assyrian Christians in Iraq. "They never know when they go to church, if that's going to be the last mass, the last moment of their lives."[60] The press conference was prompted by the 31 October 2010 massacre at "The Lady of Salvation Church" in Baghdad.[61][62]

In 2006, at the 73rd Annual Assyrian Convention in Chicago, Illinois, the Board of Advisors of the Assyrian American National Federation, Inc., Rosie Malek-Yonan was awarded Woman of the Year.[63][64]

For her numerous contributions as an actress, artist, director, author and activist, in March 2008, Rosie Malek-Yonan was awarded for Excellence in Arts and Entertainment by the Iranian American Political Action Committee (IAPAC).[9]

At the Assyrian Universal Alliance 26th World Conference in Sydney, Australia, Rosie Malek-Yonan was awarded 2009 Assyrian Woman of the Year in recognition of her substantial contribution to advance the Assyrian national cause by promoting international recognition of the Assyrian Genocide, her extensive efforts in conveying the needs of the Assyrians to the United States government, and achievements in providing individual service to the Assyrian community worldwide.[65]

Rosie Malek-Yonan is a founding member of the Assyrian Cultural and Arts Society that has provided scholarships since 2005 to students at Woodbury University's Design School through an annual Assyrian Design Competition.[5][66]

In 2009 Malek-Yonan became an ambassador for the Swedish based organization, Assyrians Without Borders.[5][67] 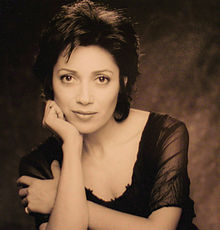 The Crimson Field is an historical and literary epic novel, set in Urmia, Iran, Russia and San Francisco, California. It is based on real events and true family chronicles set to the backdrop of the Assyrian Genocide of 1914-1918 in the shadows of World War I where 750,000 Assyrians were massacred by the Ottoman Turks, Kurds and Persians in Ottoman Turkey and in the Assyrian inhabited region of Urmi (Urmia) in northwestern Iran.[8][98] The book was selected as The Assyrian Event of the Year 2005 by Zinda magazine (22 April 2006).[99] It was features in the Winter 2007's fourth issue of MAKE, a Chicago Literary Magazine[100] and chosen as required reading by Professor Ellene Phufas for a World Literature class for the SUNY system (State University of New York) to represent a work about the Christian Genocides in Asia Minor.[101]