Mammoth Mountain Ski Area is a large ski resort located in Eastern California, along the east side of the Sierra Nevada mountain range in the Inyo National Forest.

The ski area is built on the north side of Mammoth Mountain, located in the volcanic Long Valley Caldera. Overnight guests stay in the town of Mammoth Lakes, California, and occasionally in neighboring towns such as Bishop. Mammoth has more than 3,500 acres (1,400 ha) of skiable terrain, serviced by 28 lifts, including 3 gondolas. The area has 3,100 ft (940 m) of vertical, rising to an elevation of 11,053 ft (3,369 m).[1] The top of the mountain has challenging chutes and open mogul runs. There are eight Unbound terrain parks. Unbound Main, located adjacent to Main Lodge, is highly praised by extreme snowboarding and skiing enthusiasts, and is one of the major attractions of the ski resort. Many of the top professionals in the sport, including 2006- and 2010 Winter Olympics gold medalist Shaun White, come to practice and compete in the world famous 18 ft (5.5 m) Super Pipe and 22 ft (6.7 m) Super-Duper Pipe. There are only a handful of SuperDuper pipes in the world. There is also a Mini Pipe. Mammoth Mountain is one of only a handful of resorts in the world to offer a halfpipe of this size and is the only resort in North America to offer three different-sized halfpipes.

Mammoth Mountain also has one of the longest ski seasons in North America, which averages from November to June. Mammoth does occasionally open earlier, such as in 2005, when the resort opened in October, and did not close until the 4th of July. Mammoth Mountain's longest season, over ten months, was thanks to the 1994-1995 winter season when the resort opened on 8 October and did not close until 13 August. Mammoth receives an average of 354 in (900 cm) of snow per season, though during the 2010-2011 season the resort recorded a record accumulation of 661 in (1,680 cm).[2]

As recently as the 1980s, senior citizens skied Mammoth for free. As of 2006[update], those aged at least 80 years may ski free. Following the tradition established by Dave McCoy, no Mammoth Mountain employees are permitted to have beards. 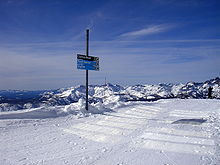 The view from the top of the famous Cornice Bowl ski run, at the summit of the mountain.

Mammoth Mountain is located in California's Eastern Sierra approximately 100 mi (160 km) south of the Nevada state line and 50 minutes from the Eastern Gate of Yosemite National park. Even though the ski area is located in Northern California, the resort is mainly frequented by skiers and snowboarders from Southern California. Though it is a five-hour drive from Los Angeles, Mammoth is much closer for Southland skiers and riders than the Lake Tahoe area resorts, which are more accessible to the San Francisco Bay Area. Mammoth Mountain is a more popular destination than Southern California resorts, because of these areas' heavy reliance on snowmaking, lighter precipitation, and their notably shorter seasons. Although Mammoth is physically closer to San Francisco and central valley cities than Los Angeles, mountain passes along the Sierra crest are closed after the first major snowfall, and this lack of a trans-Sierra travel route creates an unusually long drive to Mammoth from the Bay Area and most of Northern California. For example: during the summer, the distance from Fresno to Mammoth Lakes is 189 mi (304 km), while the same excursion in winter involves 366 miles of driving.

Mammoth was founded by Dave McCoy, a hydrographer for the Los Angeles Department of Water and Power. As a member of the Eastern Sierra Ski Club in the 1930s, McCoy noticed that Mammoth Mountain consistently held more snow than other mountains. The Ski Club had a portable rope tow. McCoy bought the rope tow from the club in 1941 and usually kept it at Mammoth. In 1953, the United States Forest Service awarded a permit to McCoy to operate the ski area. The first ski lift was built in 1955.

Similar to other ski resorts, Mammoth had a number of associated fatalities in its history:

The Gondola at The Village at Mammoth

In January 1996, Intrawest Corporation and Mammoth Mountain Ski area announced that Intrawest Corporation had purchased 33% of Mammoth and June Mountain ski operations, as well as all of the developable real estate owned by Mammoth Mountain Ski Area. In 1998, Intrawest increased their partnership interest to 58%. The development of three new village areas: The Village at Mammoth, Sierra Star, and Juniper Springs, has brought new developments to the resort.

The Village at Mammoth was built in a style similar to other Intrawest properties, such as Whistler or Keystone. The Village Gondola was built in the early 2000s which transports skiers from the Village to the Canyon Lodge base.

On February 23, 2005, Dave McCoy announced that he would be selling his stake in Mammoth Mountain, after 68 years of running the ski area. On October 5, 2005, Mammoth announced that a majority stake will be sold to Starwood Capital Group, a private equity fund specializing in real estate, run by Barry Sternlicht. The sale price was $365 million.[4]

Because of a poor economy in California, beginning in 2007, many of the stores and restaurants in The Village closed. However, in the fall of 2010, with the help of local business owners, the Village has seen a resurgence of new restaurants and stores.

The gondola to the summit of the ski area

Before and during the changes of ownership, the ski area underwent major changes. The resort went from 16 chairs in the 1980s to 25 today. A new gondola was built that ends at a visitor center at 11,053 feet (3,369 m). The visitor center has telescopes and historical displays.

Almost all the old, slow, double chair lifts were replaced with high-speed quad, and six-seater lifts. Several old lifts were also removed. The Mid-Chalet, which once had picnic tables on its roof, was completely remodeled in the early 2000s, re-named McCoy Station, and now features gourmet foods and a cafeteria. Large vintage photos of McCoy and his family can be found hanging from the ceiling there. The Mill Cafe, a small rustic bar and snack area was added in the early 2000s. The ski area is replacing chair 5 with a new high speed quad which will be ready for the 2011/12 winter season. The new lift will be called High Five Express.