Masticophis flagellum is a species of nonvenomous colubrid snakes commonly referred to as coachwhips or whip snakes, with seven recognized subspecies.

Coachwhips range throughout the southern United States from coast to coast. They are also found in the northern half of Mexico. Typically, they are found in open grassland habitats, but can also be found in lightly forested areas.

Coachwhips are thin-bodied snakes with small heads and large eyes with round pupils. They vary greatly in color, but most reflect a proper camouflage for their natural habitat. M. f. testaceus is typically a shade of light brown with darker brown flecking, but in the western area of Texas, where the soil color is a shade of pink, the coachwhips are also pink in color. M. f. piceus was given its common name because specimens frequently, but not always, have some red in their coloration. Coachwhip scales are patterned so at first glance, the snake appears braided. Subspecies can be difficult to distinguish in areas where their ranges overlap. Adult sizes of over 160 cm (63 in) are not uncommon.

Coachwhips are diurnal, and actively hunt and eat lizards, small birds, and rodents. They tend to be sensitive to potential threats, and often bolt at the first sign of one; they are extremely fast-moving snakes. They are curious snakes with good eyesight, and are sometimes seen raising their heads above the level of the grass or rocks to see what is around them. 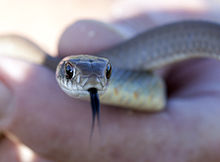 The primary myth concerning coachwhips, that they chase people, likely arises from the snake and the person both being frightened, and both just happen to be going the same way to escape. Coachwhips are fast snakes, often moving faster than a human, and thus give an impression of aggression should they move toward the person.

The legend of the hoop snake may refer to the coachwhip snakes.

Another myth of the rural southeastern United States is of a snake that, when disturbed, would chase a person down, wrap him up in its coils, whip him to death with its tail, and then make sure he is dead by sticking its tail up the victim's nose to see if he is still breathing. In actuality, coachwhips are nowhere near strong enough to overpower a person, and they do not whip with their tails, even though it is long and looks very much like a whip. Their bites can be painful, but generally are harmless unless they become infected.