Dustin Penner (born September 28, 1982) is a Canadian professional ice hockey forward currently playing for the Los Angeles Kings of the National Hockey League (NHL). Penner was never drafted by a team in the NHL. He was discovered and signed as a free agent by the Mighty Ducks of Anaheim after playing college hockey for the University of Maine in the NCAA. Penner won the Stanley Cup in his rookie season with the Anaheim Ducks in the 2007 Stanley Cup Playoffs. He is known as a power forward, using his ability to maneuver his way around and behind the net with his big size and soft hands.[1][2]

Stemming from habits developed during his time with the Edmonton Oilers, citizens of that city now commonly refer to the donair as a "Penner".

Growing up in Winkler, Manitoba, Penner played on his high school team, the Garden Valley Zodiacs. Pursuing hockey beyond his high school, he was, however cut by many minor hockey teams,[3] including his local junior club three times.[4]

With little hope of ever playing hockey professionally,[4] Penner agreed to play with Minot State University-Bottineau, now known as Dakota College at Bottineau, but immediately broke his femur, ending his first year with the club. The next year, in the 2001-02 season, he became a very important player for the club, scoring 20 goals with 13 assists in 23 games, also earning the Most Determined Player Award for his improvement and stellar play after recovering from his injury.[5]

Penner then went to an evaluation camp at Saskatoon. He played well there, scoring an average of three points per game. There he was spotted by Grant Stanbrook, the assistant coach for the University of Maine.[6] Penner was offered a scholarship, which he accepted.[4] Although he did not inititally join the team that year, in 2003–04, he helped lead the Black Bears and to the NCAA Championship game, scoring the game winning goal in the semifinals against Boston College. Maine then lost the championship title game to the University of Denver 1-0.[7] 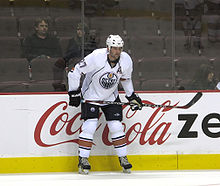 Penner was signed as a free agent by the Mighty Ducks on May 12, 2004 to a three-year entry-level contract. He was assigned to the Cincinnati Mighty Ducks, Anaheim's American Hockey League (AHL) affiliate. He recorded 28 points in his professional rookie season with Cincinnati, then took a major step the next season as he was moved to the Portland Pirates, who became the Mighty Ducks' AHL affiliate in 2005–06. He scored 39 goals and 84 points in 57 games with Portland while also making his NHL debut, appearing in 19 games with the Mighty Ducks that season. He was originally called up on November 23, 2005, being sent back and forth from the minors.[8] During the Mighty Ducks' 2006 playoff run, scoring 9 points in 13 games until Anaheim was eliminated by the Edmonton Oilers in the Western Conference Finals.

Penner earned a full-time roster spot with the Ducks in 2006–07 and broke out with 29 goals and 45 points playing with Ryan Getzlaf and Corey Perry on a unit dubbed the "Kid Line". His goals total was second most on the team, only trailing superstar Teemu Selänne who scored 48, while setting the Ducks' franchise rookie record for most points (surpassed by Bobby Ryan in 2008–09).[9] During the Ducks' 2007 Stanley Cup run, Penner scored the game-winner in Game 1 of the Western Conference Quarterfinals against the Minnesota Wild[10] and Game 4 of the Stanley Cup Finals against the Ottawa Senators.[11] In Game 5, Penner and the Ducks defeated the Senators 6-2 to win the Stanley Cup. Penner became the first former Maine Black Bear to win the Stanley Cup as a player.[12]

After winning the Stanley Cup with the Ducks, Penner's entry-level deal expired and he became a restricted free agent in the off-season. With the Ducks dealing with salary cap issues and the signing of Todd Bertuzzi, Kevin Lowe, then the general manager of the Edmonton Oilers, jumped on the opportunity and signed Penner to a five-year, $21.25 million offer sheet. Lowe was criticized by the media and specifically Ducks general manager Brian Burke for the contract as being grossly inflated.[13] After seven days, the Ducks were unwilling to match the offer and Penner became an Oiler. To date, Penner is the most recent player to change teams via an offer sheet.[14]

In his first season with the Oilers, Penner scored a team-high 23 goals and improved to 47 points. He then began the 2008–09 season with a slow start and was publicly criticized by head coach Craig MacTavish for a lack of fitness and competitiveness after being made a healthy scratch for the second consecutive game.[3]

Penner was confirmed to be a part of a planned summertime 2009 blockbuster trade that would see Andrew Cogliano, Ladislav Smid, and himself dealt to the Ottawa Senators in exchange for disgruntled All-Star forward Dany Heatley. In the end, Heatley exercised the no-trade clause contained in his contract and the deal could not be finalized. Heatley would shortly after accept a trade to the San Jose Sharks instead, and Penner remained an Oiler.

Penner got off to a good start in 2009-10 NHL Season and was fourth in NHL scoring with 11 goals and 11 assists after 18 games played. On October 22, for the first time in his career, he scored 5 points (2 Goals, 3 Assists), in a game against the Columbus Blue Jackets. His linemates for that game were Ales Hemsky (1 Goal, 4 Assists) and Sam Gagner (1 Goal, 2 Assists). At season's end, the Oilers had finished last overall in the league, but Penner had recorded career highs in goals (32) and points (63).

On February 28, 2011, Penner was traded from the Edmonton Oilers to the Los Angeles Kings in exchange for Colten Teubert, a first round draft pick in 2011, as well as a conditional second round pick in 2012.[15]