See: Berry Field Air National Guard Base for information about the United States Air Force use of the airport

Nashville International Airport (IATA: BNA, ICAO: KBNA) is a joint civil-military airport in southeastern Nashville, Tennessee. The IATA Airport Code BNA is descended from one of the city's early aviation facilities—Berry Field, NAshville, which was the name of the current facility until 1988, when the name was changed to reflect plans for international flights. The airport has four runways.

The airport opened in 1937 as Berry Field, named after Harry S. Berry, the Tennessee administrator for the Works Progress Administration. It covered 340 acres (1.4 km2) along Dixie Parkway (now Murfreesboro Road).

A much larger terminal opened in 1961; it was the setting for several scenes in the 1975 Robert Altman film Nashville, and was off Briley Parkway. The current passenger facility on Donelson Pike opened in 1987, and was designed for a new American Airlines hub. A year later it was renamed Nashville International Airport/Berry Field to reflect its new status. While it is now rare to see the "Berry Field" portion used, the airport's IATA code is short for Berry Field NAshville.

Initially, American Airlines scheduled 135 flights daily to 60 cities; an international wing was built in Concourse A for a flight to London. American's service peaked in 1992, after which routes were cut back until eventually American closed the hub. Southwest Airlines quickly filled the void by seizing 47% of the Nashville market and making it a focus city. Today Nashville International Airport is served by 14 carriers with more than 375 average daily arriving and departing flights at 47 air carrier gates. Nashville International has direct air service to 90 markets.[1] BNA averages a total of 523 commercial, general aviation, air taxi, and military flight operations per day.[2] Nonstop flights are available to 45 domestic destinations and two international.

Nashville International Airport has four concourses, of which only three are actually in use. 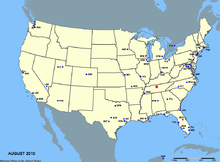 This concourse, currently closed by the Metro Nashville Airport Authority (MNAA), was constructed as a ground level commuter terminal for American Eagle. All American Eagle flights operated out of Concourse D until, as a cost cutting measure after 9/11, all American Eagle flights were moved to Concourse C to share gates with American Airlines. For a short period of time, Concourse D was used by Corporate Airlines to operate its own regional flights until it became an American Connection and Continental Connection regional affiliate.[4] Currently, the MNAA has no plans to reopen Concourse D.[5] Concourse D is currently occupied by the Transportation Security Administration.

The American Airlines Admirals Club is located above gate C12. The facility, which was closed after September 11, 2001, reopened on July 11, 2007.

Nashville International Airport takes great pride in showcasing the Middle Tennessee region's visual and performing arts. Arts at the Airport receives funding for the visual arts from the Metropolitan Nashville Airport Authority (MNAA) and the Tennessee Arts Commission (TAC). The award-winning Arts at the Airport program reviews and presents works by local, regional, and national artists for the enjoyment and enrichment of Nashville International Airport's passengers and visitors. In addition to visual art, Arts at the Airport includes music since it is an integral part of Nashville. The arts come alive with musical performances on stages throughout BNA’s passenger terminal. The Flying Solo Exhibition Series is supported by the Metropolitan Nashville Airport Authority (MNAA), the Tennessee Arts Commission (TAC), and is funded under an agreement with the State of Tennessee.[7]

Air cargo integrators, charter cargo airlines and air express companies operate daily from the Nashville Air Cargo all-cargo complex. The complex, located across the airfield from the airport's passenger facility, is within five minutes of Interstate 40. It provides taxiway access to Nashville International's three parallel runways and crosswind international runway. The airport has seen considerable growth in its cargo offerings in recent years with the addition of a 70,000 sq ft (7,000 m2) FedEx facility at BNA. China Airlines ceased operations at Nashville on July 31, 2009

Airlines with cargo operations at Nashville International Airport are: