Space Jam
This article is about the motion picture. For other uses, see Space Jam (disambiguation).

Space Jam is a 1996 American live-action/animated family sports film starring Michael Jordan and Wayne Knight, as well as the cast of the Looney Tunes. The movie also marks the debut of Lola Bunny. It was produced by Ivan Reitman, and directed by Joe Pytka (live-action), Tony Cervone, and Bruce W. Smith (animation). It is the first film ever to pioneer and use Toon Boom animation.

A fictional account of Jordan's retirement from the NBA, the film was released theatrically by Warner Bros. Family Entertainment on November 15, 1996. There was also a licensed pinball game by Sega based on the film and a video game by Acclaim Entertainment. It plays out as an alternate story of Michael's initial return to basketball, this time with him being inspired by Bugs Bunny and others. Although the film received mixed reviews overall, it was a box office success, opening at #1 in the US, and grossing over $230 million worldwide. It was also the fastest-selling home entertainment subject as sales reached $100 million.[1] 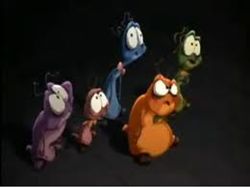 the Nerdlucks as they appear in the film

The Looney Tunes challenge the Nerdlucks to a basketball game

As NBA superstar Michael Jordan retires from basketball to pursue a career in baseball, Mister Swackhammer, the proprietor of the extraterrestrial theme park "Moron Mountain", is seeking new attractions for his failing park. He sends his minions, the "Nerdlucks", to capture the Looney Tunes, who reside deep below the surface of the Earth.

The Looney Tunes retaliate by challenging the Nerdlucks to a basketball game, since they are not very tall. To prepare for the game, the Nerdlucks return to Earth and steal the talent of Charles Barkley, Patrick Ewing, Muggsy Bogues, Larry Johnson and Shawn Bradley by forcing their way into the players' bodies and stealing their talent. The Nerdlucks use the stolen talent to become the "Monstars" (or "Mean Team"), gigantic creatures that the Looney Tunes are unable to defeat by themselves. To aid them, the characters recruit a reluctant Jordan and his wormy and rotund publicist Stan Podolak.

Soon after, the game between the ToonSquad and the Monstars begins, but the Looney Tunes are roughed up by the brutal playing style of the Monstars until only Jordan, Bugs, Lola and Daffy are left standing leaving them short one player. Bill Murray, being friends with the producer of the film, is able to enter the Looney Tunes' world and join their team, averting forfeiture.

By the climax of the game, the ToonSquad are down by one, and it is up to Michael to score the final point for his team. Using his extendable arm, supplemented by the power of toon physics, Michael manages to make the basket and win the game. Afterwards, the characters return Michael back to Earth, where he returns the stolen talent back to their respective owners. He is later prompted by his rivals to return to the NBA, mirroring his real-life comeback.

The voices of the Nerdlucks are provided by Jocelyn Blue (Pound), Charity James (Blanko), June Melby (Bang), Catherine Reitman (Bupkus) and Colleen Wainwright (Nawt); the voices of the Monstars are provided by Darnell Suttles (Pound), Steve Kehela (Blanko), Joey Camen (Bang), Dorian Harewood (Bupkus) and T. K. Carter (Nawt). Dan Castellaneta and Patricia Heaton also make cameo appearances as a couple that the Nerdlucks (in disguise) sit next to at a basketball game.

Michael Jordan was the star of the film

Although retired at the time, Bird appeared as one of Michael's friends

Aside from Jordan, a number of NBA players and coaches appeared in the film. Larry Bird portrays a friend of Jordan who joins him for a game of golf. When the Monstars steal the NBA players' talent, they invade a game between the Phoenix Suns and the New York Knicks, causing the Knicks' Patrick Ewing and the Suns' Charles Barkley to make in-game mistakes. In these scenes, the Knicks' Charles Oakley and Derek Harper and the Suns' A. C. Green, Danny Ainge, and Paul Westphal (coach) are also offscreen.

Later in the film, Ewing and Barkley are joined by the now "extremely talent-less" Larry Johnson, Muggsy Bogues and Shawn Bradley. Also, when the Los Angeles Lakers are trying to avoid playing basketball in fear of getting infected, Lakers Vlade Divac, Cedric Ceballos, Anthony Miller, and coach Del Harris make a short cameo. Similar short appearances are also made by Jeff Malone, Alonzo Mourning, and Sharone Wright and TV commentators Jim Rome and Ahmad Rashād. During the part of the movie when Jordan returns to the Chicago Bulls, they play the Orlando Magic where Shaquille O'Neal can be seen running for the ball.

Space Jam received mixed reviews. According to Rotten Tomatoes, only 37% of critics, and 46% of their selected "Top Critics", gave the film a positive review; this gave it a "Rotten" rating. Notable critic Roger Ebert gave Space Jam an enthusiastic "thumbs up," which Gene Siskel also gave the film, although his zeal was more subdued. Leonard Maltin also gave the film a positive review. Some critics compared it unfavorably to Disney's Who Framed Roger Rabbit, a popular film in which cartoon characters and live-action humans coexisted.[3] Those who liked the film praised the visual effects, which were groundbreaking at the time. However, many criticized the film for being an over the top attempt to market the NBA to children.

The soundtrack sold enough albums to be certified as 6x Platinum.[4] It also served as a high point for musical artist R. Kelly, whose song "I Believe I Can Fly" became a hit after it was featured on the film's soundtrack. Other tracks included a cover of "Fly Like an Eagle" (by Seal), "Hit 'Em High (The Monstars' Anthem)" (by B-Real, Busta Rhymes, Coolio, LL Cool J, and Method Man), "Basketball Jones" (by Chris Rock & Barry White), and "For You I Will" (by Monica). The movie's theme song was performed by the Quad City DJ's.