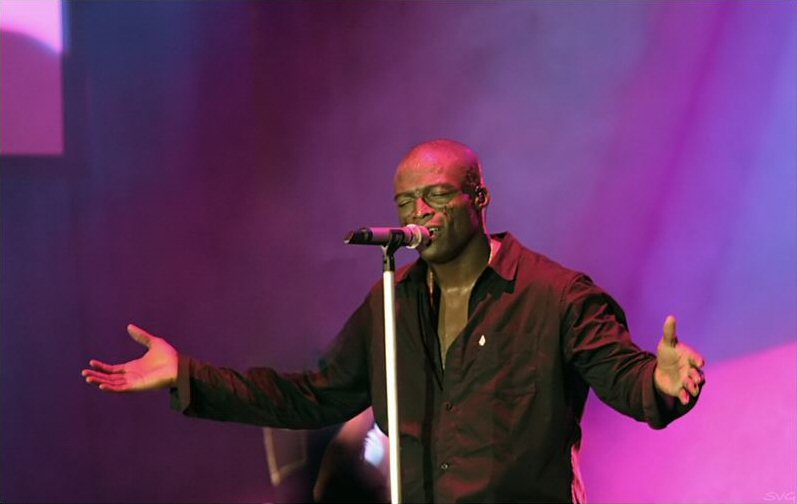 Sealhenry Olusegun Olumide Adelo Samuel (born , in , ) is a British soul and . [http://www.askmen.com/toys/interview_100/102_seal_interview.html AskMen.com Bio] His name Olusegun means "God is victorious". [ [http://www.nigerian.name/w/index.php?title=Olusegun Olusegun meaning] Known professionally by his first name, Seal (pronounced "see-ell")clarify is known for his numerous international hits and his marriage to supermodel .

Seal was born Seal Henry Olusegun Olumide Adelo Samuel in , a district of the in inner , to a Nigerian mother and a Brazilian father. He graduated with a degree in , and worked in various jobs in the London area. Seal got his famous characteristic facial scars as a result of discoid lupus, which, additionally, caused some hair loss. [ [http://futureloveparadise.co.uk/qna/03scars.html Seal's Future Love Paradise: Q & A: Where did Seal get those facial scars? ] ]

After a short time singing in local clubs and bars, in the 1980s he joined , a British funk band, and toured with them in . In , he joined a band in for a while before separating from the group and journeying throughout on his own. When Seal arrived back in England, he met , a producer who was impressed by him. He was given the lyrics of the song "Killer", which was a huge hit in 1990.

Seal first came to public attention as vocalist on the single "Killer" in 1990. The single eventually reached number one in 1990 in the UK. Seal subsequently signed to and released his debut album (produced by ), self-titled "Seal", in 1991. Two versions of the album are known to be in circulation: the original " [http://futureloveparadise.co.uk/anthology/disc-album/seal1edit.html premix] " version and a second, more common version with an updated mix. This is attributed to the demand for a produced single rushing the final album edit, and as Seal puts it, his and producer Horn's "inability to let go." [ [http://futureloveparadise.co.uk/index.html?s=anthology&d=disc-album&p=seal1edit Future Love Paradise - 10 Years on and Still the Web's Best Source of Seal Info ] ]

"Seal" was positively received by critics. The singles "Crazy", "Future Love Paradise", and his own rendition of "Killer" performed well on the charts. In particular, "Crazy" became a hit in the United States in 1991, reaching number seven on the Billboard Music Charts and number two in the U.K. [ [http://www.billboard.com/bbcom/bio/index.jsp?pid=5630 Billboard.com - Biography - Seal ] ]

In April of 1992 Seal performed with the surviving members of the rock band Queen at the . Seal performed on his own singing the 1986 hit and joined the rest of the acts for the all star finale singing .

His second album, also self-titled "Seal", was released in 1994. A success, the album featured the singles "Prayer for the Dying" and "Newborn Friend", later receiving a Grammy nomination for Album of the Year. "Prayer for the Dying" became a minor pop hit in the U.S., peaking at #21 on the Billboard charts. A third single, "", performed modestly when released but was later featured in the film "". "Kiss from a Rose" won a for and in 1996, becoming Seal's best performing single on the US market (it topped the Billboard Hot 100 in late August 1995). It is considered his signature song. Later, he recorded a cover of Steve Miller Band's "Fly Like an Eagle" for the "" soundtrack.

After the release of his previous album, in 1998, Seal released "Human Being". The album was the product of a turbulent time in his life, including a split and later reconciliation with producer Horn as well as Seal's parting with ZTT Records and his signing with in 1997. The record was panned upon its release. However, it received Gold record certification by the just two months after its release date. [ [http://www.riaa.com/ RIAA.com] "Human Being" Gold certification date 01/22/1999, Retrieved , ] The album provided three singles, "Human Beings", "Latest Craze", and "Lost My Faith".

In 2001, fans awaited the arrival of a new album, announced as "Togetherland". However, after a protracted post-production period the album was cancelled. The official word was that Seal simply didn't think it made the grade, although this conflicts with [http://www.angelfire.com/co2/redwolf707/seal.html other reports] that said the album was turned down by the label because producers felt the album wouldn't be commercially successful. Even so, one single was released from the album. "This Could Be Heaven" was released in the US and featured on "" soundtrack. Since , Seal has indicated that he has plans to excerpt cuts from "Togetherland" and make them available for streaming download. The complete or edited versions of the songs "All I Wanted To Say," "Elise" (also known as "Eliz"), "Love Is Better," and "This Could Be Heaven", are available as streaming audio only on Togetherland co-producer [http://www.henryjackman.net/ Henry Jackman's website] .

Meanwhile, Seal co-wrote and provided vocals for the hit single "My Vision" from in 2002. He also recorded a successful duet with French icon called "Les Mots" during that same period.

In 2003, Seal released his fourth album, which was again self-titled, except for Australia, where it was released under "Seal IV". Although it did not sell as well as either of his first two albums, this release brought him back into the public eye in the United States and continental . Singles from the album included "Waiting For You", "Get It Together", and "Love's Divine" (released in 2004, and a big hit in several an countries).

In 2004, a greatest hits album entitled "Seal: Best 1991-2004" was released, including a cover of the Bacharach / David classic "Walk on By" and a cover of 's song "Lips Like Sugar". Also for a small additional fee the album could be bought with a limited edition acoustic CD with acoustic covers of songs such as "Killer" And "Kiss from a Rose".

Also in 2004, Seal performed shows at the Olympia Theatre in Paris, France. The , show was recorded and released about one year after as CD/DVD package, simply titled "Live in Paris".

"One Night to Remember"

In , Seal recorded a special concert which was subsequently released in 2006, entitled "One Night to Remember", as CD/DVD combination. The DVD includes a special "the making of" documentary in addition to the live performance. Recorded in a historic steel mill, the "Altes Kesselhaus" ("old boiler house"), in , , this performance includes a special version of Brahms' "Lullaby" which Seal sings in German and then in English for the exclusive audience. Unlike earlier recordings in which Seal is accompanied by his band, a full orchestra and choir of 52 musicians accompanies the singer.

Seal performed "Amazing" and the ' "" at the 2007 Royal Variety Performance.

Seal also performed "Amazing" at the 2007 Fashion Show in December, as well as the duet "Wedding Day" with his wife. Other performers at the 2007 Victoria's Secret Fashion Show include the and of . He appeared on the American Idol Season 7 Finale, singing with third-place contestant Syesha Mercado.

The couple have two sons together, Henry Günther Ademola Dashtu Samuel or Henry Samuel, Jr., born , , in , [http://www.people.com/people/article/0,,1103758,00.html?cid=redirect-articles/] and Johan Riley Fyodor Taiwo Samuel, born , , in .Seal is also the stepfather of Heidi's 4-year-old daughter Helene "Leni" Klum, whom Heidi had with Renault Formula One team director and Italian businessman . [http://www.smh.com.au/news/people/heidi-klum-gives-birth/2005/09/13/1126377313883.html] Seal is her only father figure, and he has praised Briatore for keeping his distance and not disrupting Leni's life. [http://www.celebrity-babies.com/2008/07/leni-henry-samu.html]