Space charge is a concept in which excess electric charge is treated as a continuum of charge distributed over a region of space (either a volume or an area) rather than distinct point-like charges. This model typically applies when charge carriers have been emitted from some region of a solid—the cloud of emitted carriers can form a space charge region if they are sufficiently spread out, or the charged atoms or molecules left behind in the solid can form a space charge region. Space charge usually only occurs in dielectric media (including vacuum) because in a conductive medium the charge tends to be rapidly neutralized or screened. The sign of the space charge can be either negative or positive. This situation is perhaps most familiar in the area near a metal object when it is heated to incandescence in a vacuum. This effect was first observed by Thomas Edison in light bulb filaments, where it is sometimes called the Edison effect, but space charge is a significant phenomenon in many vacuum and solid-state electronic devices.

When a metal object is placed in a vacuum and is heated to incandescence, the energy is sufficient to cause electrons to "boil" away from the surface atoms and surround the metal object in a cloud of free electrons. This is called thermionic emission. The resulting cloud is negatively charged, and can be attracted to any nearby positively charged object, thus producing an electrical current which passes through the vacuum.

Space charge can result from a range of phenomena, but the most important are:

It has been suggested that in AC most carriers injected at electrodes during a half of cycle are ejected during the next half cycle, so the net balance of charge on a cycle is practically zero. However, a small fraction of the carriers can be trapped at levels deep enough to retain them when the field is inverted. The amount of charge in AC should increase slower than in DC and become observable after longer periods of time.

If the "vacuum" has a pressure of 10-6 mmHg or less, the main vehicle of conduction is electrons. The emission current density (J) from the cathode, as a function of its thermodynamic temperature T, in the absence of space-charge, is given by:

The emission current as given above is many times greater than that normally collected by the electrodes, except in some pulsed valves such as the cavity magnetron. Most of the electrons emitted by the cathode are driven back to it by the repulsion of the cloud of electrons in its neighborhood. This is called the space charge effect. In the limit of large current densities, J is given by the Child-Langmuir equation below, rather than by the thermionic emission equation above.

Space charge is an inherent property of all vacuum tubes. This has at times made life harder or easier for electrical engineers who used tubes in their designs. For example, space charge significantly limited the practical application of triode amplifiers which led to further innovations such as the vacuum tube tetrode.

On the other hand, space charge was useful in some tube applications because it generates a negative EMF within the tube's envelope, which could be used to create a negative bias on the tube's grid. Grid bias could also be achieved by using an applied grid voltage in addition to the control voltage. This could improve the engineer's control and fidelity of amplification. 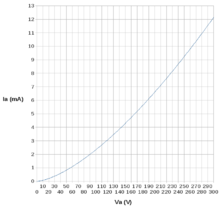 Graph showing Child-Langmuir Law. S and d are constant and equal to 1.

Also known as the Child-Langmuir Law or the Three-Halves Power Law, Child's Law states that the space-charge limited current in a plane-parallel diode varies directly as the three-halves power of the anode voltage Va and inversely as the square of the distance d separating the cathode and the anode. That is,

Where Ia is the anode current, J the current density, and S the anode surface inner area. This assumes the following:

In the low-field regime, velocity of injected carriers can be represented by

is the applied electric field, μ is the carrier mobility, and v is the carrier velocity. If the current is limited by the drift component of inject carriers, the space-charge-limited conduction current density J can be written as

where Va is the applied voltage, and L is the length of the plane-parallel sample. This expression is known as the Mott-Gurney law.

In the velocity-saturation regime, this equation takes the following form

Note the different dependence of J on Va in each of the two cases. Interestingly, in the ballistic case (assuming no collisions,) the Mott-Gurney equation takes the form of the more familiar Child-Langmuir law.

It should be noted that the above derivations make the following assumptions:

As an application example, the steady-state space-charge-limited current across a piece of silicon with a charge carrier mobility of 1500 cm2/V-s, a dielectric constant of 11.9, an area of 10-8cm2 and a thickness of 10-4cm can be calculated by an on line calculator as 126.4mA at voltage 3V.