Continental Circus is an arcade racing game created and manufactured by Taito in 1987. It was then republished in 1989 along with a home version of the game, which was available on various platforms including the Amstrad CPC, Atari ST, Amiga, Commodore 64, MSX and ZX Spectrum.

The arcade version of this game comes in both upright or sit-down models, either of which may feature shutter-type 3-D glasses hanging above the player's head, used by Taito under license by the United States Navy, who held the patent on that technology. The home conversions of Continental Circus lack the full-on 3D and special glasses of the arcade version, but retain the essential gameplay structure.

The in-game vehicle is the 1987 Camel-sponsored Honda/Lotus 99T Formula One car as driven by Ayrton Senna and Satoru Nakajima. Due to licensing reasons, sponsor names such as "Camel or "DeLonghi" are intentionally misspelled to prevent copyright infringement under Japanese law.

The game has eight courses, in which they were used within 1966-1987 season timeframe. The following are the course list:

As in the real F1 races, the car is susceptible to damage from contact with another car. Once a player hits a car or a piece of the trackside scenery, they will be called into the pits. If they let the car smoke too long, it will catch fire, and the message "IMPENDING EXPLOSION" will appear. Either way, if they fail to make it back or hit another car, then they will crash or explode, costing several seconds.

Also, if the car reaches speeds in excess of 380 km/h, the speedometer will turn yellow as a warning to the player to let them know the car is going way too fast. If the car hits another car from behind, the collision will send the car into a devastating cartwheel until it explodes, costing several seconds.

In the same light, going too fast through a turn will cause the car to lose grip on the road. If the car loses grip, it will spin out of control. There's a low chance of a wreck happening, but this will definitely take several seconds off the clock. Also, from time to time, a thunderstorm will occur, causing the track to become wet, and causing the car to lose traction. In that case, the message "CHANGE TIRES" will appear, and the player must immediately get into the pits to change to wet-tyres. If the storm dies down, the road will be covered in puddles. This does not pose a threat. In fact, running across the puddles cools down the tyres to some extent.

Continental Circus did not offer much on music like most arcade racers do, but instead offered intro/outro music for each race in the vein of Pole Position and Pole Position II. Afterwards, the screen cuts to the start line of the race course, and an announcer comes on with the famous message, "Gentlemen, start your engines! 30 seconds before the start!" 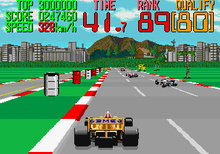 Afterwards, the gameplay would only feature sound effects, unless the player has to pit in for one of the above reasons. During pit, the player can hear the pit crew at work, followed by one member shouting various phrases. For example, upon entry, one member shouts "Don't lose a second... OK, high gear! Let's Go! Go! Go! Go!" In the Arcade game, when the correct amount of coins are inserted there'll be a voice shouting "GO" to indicate the start of the game

The entire collection of musical scores, sound effects, and voice clips were featured in a compilation soundtrack known as "究極TIGER -G.S.M.TAITO 2-". The musical score was composed by "ZUNTATA"

The game itself should have been called "Continental Circuits", but a misunderstanding between the US designers and the Japanese programmers led to the incorrect name "circus". On some fan-made websites, "Continental Circus" suffers from what is referred to as "Donkey Kong Syndrome" (literally Engrish - though Donkey Kong is not exactly a case of mistranslation, see its article for more details).

Some also believe that the decision to call the game "Continental Circus" was intentional, as the traveling F1 teams, cars, drivers as well as the spectacles of Formula One are sometimes referred to as the "F1 Circus" and there were a series of games entitled that by Human Entertainment.[citation needed]

In 2005, Continental Circus was released for the Xbox, PlayStation 2, and the PC as part of Taito Legends.