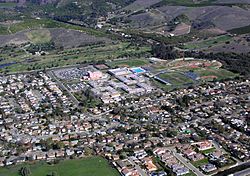 Dos Pueblos High School is a high school located in Goleta, California, west of Santa Barbara. Located adjacent to the foothills on the edge of the Goleta Valley in an area known as El Encanto Heights, it serves a student body of approximately 2,300 in grades 9-12.

Dos Pueblos, or "DP" or "DPHS", is a National Blue Ribbon School. Dos Pueblos, whose school mascot is the "Charger", was the first school to win a CIF Division I title in Santa Barbara County. The school recently finished a major renovation which included the building of a large theater, the finishing of a new football stadium, and an Olympic size pool. The school is currently in the process of constructing a 12,000-square-foot (1,100 m2) engineering facility.

Dos Pueblos is an IB World School; however, the majority of students participate in a curriculum that includes vocational, college preparation, and Advanced Placement courses.[2][3]

The Dos Pueblos Engineering Academy is a four-year program at Dos Pueblos High School that provides generally exceptional students with experimental science education. The Academy instills in students not only an appreciation for science and engineering, but also a passion for learning that extends into all areas of knowledge. The coursework is designed to provide the academic foundation necessary to support the 32 senior Engineering Academy students' participation as Team 1717 in the annual international FIRST Robotics Competition. In order to better serve students, construction of a 1,200-square-foot (110 m2) engineering facility is currently underway and is scheduled for completion in July 2011.[4]

DPHS students can participate in the International Baccalaureate Programme, a program that provides highly motivated and academically able college-bound students, an opportunity to pursue a rigorous liberal arts curriculum that is recognized by many colleges and universities. Course pre-requisites and participation are subject to instructor approval and an application process. Students may apply for the program at the end of their sophomore year. There are limited spots and not all are accepted.[2][3]

REACH is a program based on AVID principles; for students with potential to succeed in college if given the encouragement, study skills, and information. It includes in-class tutorials twice a week, speakers, college visitations, college research, and SAT preparation. Students must be on college prep track in coursework and have a 2.5 GPA or better; contract made among teacher, counselor, student and parent. Grades 9, 10, 11 are elective credits; Senior Seminar (applications, essay, scholarship/financial aid, college writing) meets "g" college prep elective credit for UC/CSU.

EXCEL is a program for the student who wants to reach their highest potential. The program helps students identify and plan career paths after graduation, including college. Activities include tutoring, study skill development, test preparation, home visits, speakers, mentors, and trips. Classes are either Period 6 or after school.[3]

Run by DP's Mr. Soenke, this class allows dedicated students to pass the CCNE tests before they graduate. DP works together with Cisco's educational programs.[3]

The Dos Pueblos High School Marching Band is the biggest group in the Instrumental Music Program at Dos Pueblos. It comprises drumline, color guard, and horn line, whom all compete and perform as one group. The Marching Chargers perform at football games as half time entertainment, in parades such as the Santa Barbara Downtown Holiday Parade, and also compete all along the south coast against other marching bands. For the two weeks preceding the beginning of the school year, the band meets every day for band camp. After school starts, the band meets daily during periods 6 and 7 to practice music and drill for their field show.

Every year the group changes the theme of its show. For the 2010/2011 season, the show was "Echoes of Childhoods Past", composed and arranged by Lozell Henderson and including "In My Life" by the Beatles, The Twilight Zone theme song, the Looney Toons Theme Song, The Simpsons Theme Song and "We Don't Have To Take It" by Twisted Sister. The drum major Is Daniel Henry, Drum Captain is Graham Wood, and the horn sargent is Orion Sweet. Previous shows have included "Synergy," "Through the Veil of Night", "An American Portrait", "Flight", The Incredibles, The Phantom of the Opera, Grease, and Les Misérables. During their "Flight" show in the 06-07 season, at the Battle of the Bands competition at Moorpark High School, the band got first place for the first time in more than five years. In 2007 the Dos Pueblos Marching Chargers also won sweepstakes with their show "An American Portrait", beating 17 other bands at the Royal Competition in October. This is the first time band has won this award in more than 15 years and it is a great honor to them. The Drumline also got the first place and high Percussion award at the Royal Competition. In 2008, the band received sweepstakes again and high music awards at the Royal Competition. In the 2011-2012 marching band season, Lozell wrote the band a song called "American Anthems". the show features a boton twirler, traditional songs of the United States, and a strong sense of american pride.

Once second semester comes, the band splits into smaller groups who each go their separate ways. The Horn Line becomes a performing concert band, the Color Guard becomes Winter Guard, and the Drumline becomes their own performing group just like the rest to showcase their talents with their instrument and compete against others of their level.[17]

The Dos Pueblos HS Jazz Ensemble is the reigning Reno Jazz Festival champion. These young men and women perform at a variety of venues in the Santa Barbara area, as well as the Reno Jazz Festival, and other Community College and High School jazz festivals on the central coast. A few students in this band even take on the responsibility of producing the annual Dos Pueblos High School Jazz Festival, which will be in its 40th year in March 2009. The 39th Festival featured thirteen competing bands from Southern California and was followed by a benefit concert for the new theatre, which all the local district high school and Santa Barbara City College bands participated in.[18]

As well as participating at jazz festivals, the Jazz Ensemble regularly plays at the local Elks' Lodge. The band plays from a classic repertoire of danceable swing tunes. The Ensemble is available for hire in the Santa Barbara area.

There is also a smaller jazz combo. It is partially student run and emphasis is placed more on individual improvisation and expression, rather than ensemble playing.

Using hand and eye coordination along with a wide variety of flags, rifles, sabers, props, and dances, the Color Guard entertains the crowd while they listen to the music of the Marching Band and the beat of the Drumline. During the first semester of the school year, the Color Guard performs with the Marching Band and the Drumline. They perform at football games and competitions. For the second semester, the guard performs to a CD instead, and travels to competitions and other performances.

The Dos Pueblos High School Orchestra gives the opportunity for high school string and wind players in 9-12 grades to learn and rehearse a variety of music as a group. Dos Pueblos is the only high school in the Santa Barbara Unified School District with an Orchestra, and the number of members have been growing each new school year. The orchestra performs at their Winter and Spring Music Concerts onstage at Elings Performing Arts Center. Some years, the group also performs at Disneyland during Disney Magic Music Days. "The class emphasizes the fundamentals of orchestral playing and all around musicianship, including proper tone production, knowledge of key signatures and their scales, technique, sight reading, and the performance of intermediate and advanced level high school orchestral literature." For more information, visit the Dos Pueblos Instrumental Music Program's website.

School teams play in the Channel League, and thus are eligible for a California Interscholastic Federation championship.

The 1983 boy's soccer team won the CIF Championship. Although the championship game with Camarillo HS ended with the score knotted at 3-3, the match was officially declared over after two overtime periods. Oddly, that year there was no method for ending a tie such as with penalty kicks. Therefore, co-champions were officially declared. This was the first CIF 4-A Championship ever won by a Dos Pueblos HS athletic team.[22]

On November 29, 2008, the team celebrated the 25th anniversary of the championship with a game against a squad of current varsity players and recent alumni. A celebration of the lifetime achievements and overall contributions to soccer in Goleta of Joe Nunez, Jorge Lorca, R. Cam Camarena, and Abe Jahadhmy capped the weekend. Tributes of applause, gratitude, tears (and shirts signed by the players) were bestowed on these four individuals in recognition of the deeply valuable contributions each has made to the communities, schools, and student-athletes of Goleta Valley. 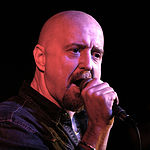