Compote
For Compote, see Compote (disambiguation).
Not to be confused with Kompot. 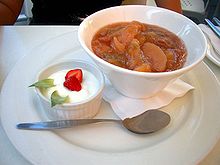 A rhubarb and apple compote.

Compote (French for "mixture") is a dessert originating from 17th century France made of whole or pieces of fruit in sugar syrup. Whole fruits are immersed in water and with sugar and spices added to the dish, over gentle heat. The syrup may be seasoned with vanilla, lemon or orange peel, cinnamon sticks or powder, cloves, ground almonds, grated coconut, candied fruit, or raisins. The compote is then served either warm or chilled arranged in a large fruit bowl or single-serve bowl for individual presentation. The dessert may be topped with whipped cream, cinnamon, or vanilla sugar. Other preparations consist of using dried fruits which have been soaked in water in which alcohol can be added, for example kirsch, rum, or Frontignan.[1] Dried fruit compote is a common passover food.

In France a compote can also be a fine puree of cooked fruit made usually with a base of apple, with the possible addition of apricot, pear or various other fruits. Compote such as this may also be used as a base for other desserts, such as French apple tart. This may be purchased from a supermarket in small single-serving containers or in larger glass jars. It has a similar consistency to baby food and may be eaten served cold as a breakfast product, dessert or simply as a snack.