Mecca Masjid
This article is about a mosque in Hyderabad, India. For the Grand Mosque in Mecca, see Masjid al-Haram.

Makkah Masjid (Arabic: ‎and Urdu: مکہ مسجد, Telugu: మక్కా మసీదు) is one of the oldest mosques in Hyderabad, India and one of the largest in all of India. Makkah Masjid is a listed heritage building in the old city of Hyderabad, close to the historic landmarks of Chowmahalla Palace and Laad Bazaar. Muhammad Quli Qutb Shah, the fifth ruler of the Qutb Shahi dynasty, commissioned bricks to be made from the soil brought from Mecca, the holiest site of Islam, and used them in the construction of the central arch of the mosque, thus giving the mosque its name. It formed the centerpiece around which the city was planned by Muhammad Quli Qutub Shah.[1]

Makkah Masjid was built during the reign of Muhammad Quli Qutb Shah, the 6th Qutb Shahi Sultan of Golconda (now Hyderabad). The three arched facades have been carved from a single piece of granite, which took five years to quarry. More than 8,000 workers were employed to build the mosque. Muhammad Quli Qutb Shah personally laid the foundation stone of the mosque. The construction was later completed by Mughal Emperor Aurangzeb after conquering Hyderabad.

Jean-Baptiste Tavernier, the French explorer, in his travelogue observed,

"It is about 50 years since they began to build a splendid pagoda in the town which will be the grandest in all India when it is completed. The size of the stone is the subject of special accomplishment, and that of a niche, which is its place for prayer, is an entire rock of such enormous size that they spent five years in quarrying it, and 500 to 600 men were employed continually on its work. It required still more time to roll it up on to conveyance by which they brought it to the pagoda; and they took 1400 oxen to draw it."[2] 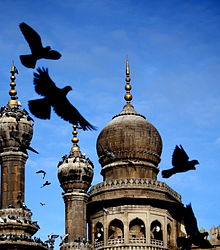 The main hall of the mosque is 75 feet high, 220 feet wide and 180 feet long, enough to accommodate 10,000 worshipers at a time. Fifteen arches support the roof of the main hall, five on each of the three sides. A wall rises on the fourth side to provide Mihrab.

At the peak of the minarets flanking the mosque is an arched gallery and above that a smallish dome and a spire.

Inscriptions from the Qur'an adorn many of the arches and doors.

The cornices running around the entire mosque structure and the floral motifs and friezes over the arches remind the tourist of the great attention paid to detail in Qutub Shahi architecture. They have a close resemblance to the arches at Charminar and Golkonda Fort.

On the four sides of the roof of the main mosque are ramparts made of granite planks in the shape of inverted conches perched on pedestals. From the cornice of the mosque, its minarets are not as high as the minarets on the mazaar (Nizams tombs) haven from their cornice. The octagonal columns have arched balconies on level with the roof of the mosque with an awning for a canopy above which the column continues upwards till it is crowned by a dome and spire.

The entrance courtyard of the mosque, a rectangular, arched and canopied building housing the marble graves of Asaf Jahi rulers.

This structure came up during the rule of the Asaf Jah rulers. It contains the tombs of the Nizams and their family.

At both ends of this resting place for the Asaf Jahs and very much a part of it, are two rectangular blocks with four minarets each. These minarets have elegant and circular balconies with low ornamental walls and arches. Above them is an octagonal inverted platter from which the rest of the minaret soars till it is arrested by a dome and a spire.

The Makkah Masjid is a listed heritage building, however, lack of maintenance and growing pollution has withered and cracked the structure. It received a chemical wash in 1995. To prevent further damage, the Andhra Pradesh government made Charminar a traffic-free zone in August 2001.

On the edge of the pond are two stone and slab benches. Whoever sits on them, according to legend, returns to sit on them again.

A room in the courtyard is believed to house a hair of the Islamic prophet Muhammed.

On 18 May 2007, a bomb exploded inside the Makkah Masjid at the time of Friday prayers, killing at least thirteen people and injuring dozens.[3] [4]