United States District Court for the District of Puerto Rico

United States District Court for the District of Puerto Rico 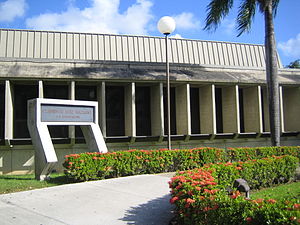 The United States District Court for the District of Puerto Rico (in case citations, D.P.R.; Spanish: Tribunal del Distrito de Puerto Rico) is the federal district court whose jurisdiction comprises the Commonwealth of Puerto Rico. The court is based in San Juan. The main building is the Clemente Ruiz Nazario U.S. Courthouse located in the Hato Rey district of San Juan. The magistrate judges are located in the adjacent Federico Degetau Federal Building, and several senior district judges hold court at the and housed at the Jose V. Toledo Federal Building and U.S. Courthouse in Old San Juan. The old courthouse also houses the U.S. Bankruptcy Court. Most appeals from this court are heard by the United States Court of Appeals for the First Circuit, which is headquartered in Boston but hears appeals at the Old San Juan courthouse for two sessions each year. Patent claims and claims against the U.S. government under the Tucker Act are appealed to the Federal Circuit.

The Foraker Act of 1900 create a federal territorial court operating within an unincorporated territory of the United States, the Article IV territorial Court for the district of Puerto Rico hears cases in a framework different from that found at true Article III Constitutional United States District Court within federal district courts.

Why is it that Puerto Rico's courts are artice III courts and not article IV courts like the other territories? A law was passed by the U.S. Congress in 1966 granting life tenure to the judges of the United States District Court for the District of Puerto Rico. This was deemed appropriate in light of the court's caseload and the conferral of Commonwealth status on Puerto Rico. No similar law has been passed for the three insular territories that still have Article IV status, though there have been calls from time to time that these judges also deserve the protection of life tenure.

In Glidden Co. v. Zdanok, 370 U.S. 530 (1962) the court cited Balzac and made the following statement regarding courts in unincorporated territories:

In 1966 President Lyndon Johnson signed Public Law 89-571, 80 Stat. 764, which transformed the Article IV federal district court in Puerto Rico to an Article III Court. This Act of Congress was not conducted pursuant to Article IV of the Constitution, the Territorial Clause, but rather under Article III. This marks the first and only occasion in United States history in which Congress establishes an Article III Court in a territory other than the District of Columbia.

There does not appear any reason why the U.S. District Judges for the District of Puerto Rico should not be placed in a position of parity as to tenure with all other Federal Judges throughout our judicial system. Moreover, federal litigants in Puerto Rico should not be denied the benefit of judges made independent by life tenure from the pressures of those who might influence his chances of reappointment, which benefits the Constitution guarantees to the litigants in all other Federal Courts. These judges in Puerto Rico have and will have the exacting same heavy responsibilities as all other Federal district judges and, therefore, they should have the same independence, security, and retirement benefits to which all other Federal district judges are entitled.

See 1966 U.S.C.C.A.N. 2786-90; see also Examining Bd. of Engineers Architects and Surveyors v. Flores de Otero, 426 U.S. at 595 n.26 (“The reason given for this [law] was that the Federal District Court in Puerto Rico ‘is in its jurisdiction, powers, and responsibilities the same as the U.S. district courts in the (several) states’.”). This important change in the federal judicialstructure of the island was implemented not as a request of the Commonwealth government, but rather at the repeated request of the Judicial Conference of the United States. See Senate Report No. 1504, 1966 U.S.C.C.A.N. 2786-90.

The territorial court created on the year 1900 by the U.S. Congress on Puerto Rico ceases to exist on 1966. The U.S. Congress transformed the territorial article IV court into an Article III Constitutional United States District Court by extending the article III constitution to the district. The United States District Court on the Puerto Rico jurisdiction born on 1966 and still in function today. The court created on the year 1900 adjourns on 1966.

There are seven authorized active judgeships in the Puerto Rico District Court. Six active judges are currently sitting, together with five senior judges who may elect to supervise reduced caseloads.

On July 31, 2011, a vacancy was created when judge Daniel R. Dominguez assumed senior status. No replacement is currently pending. 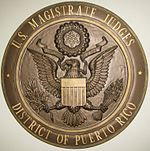 Judges who served on the Court from 1900 to 1966, before it became an Article III court, were:

During this period, judges for the District of Puerto Rico were appointed by the President for 4-year terms until 1938, and thereafter for 8-year terms. The court statutorily comprised a single judge until 1961, when a second judgeship was authorized by Congress, although the position was not actually filled until 1965. Until the 1950s, when the District Court judgeship was vacant, when the judge was away from Puerto Rico, or when the court's docket became overly backlogged, sitting judges of the Supreme Court of Puerto Rico were designated to act as judges of the federal court.

Judge Ruiz-Nazario, appointed by President Harry Truman in 1952, was the first Puerto Rican to serve as a judge of Puerto Rico's federal court.