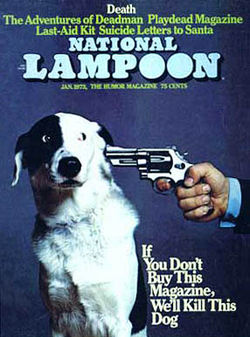 The January 1973 cover of National Lampoon.

National Lampoon was a ground-breaking American humor magazine started in 1970, as a spinoff of the Harvard Lampoon.

The magazine reached its height of popularity and critical acclaim during the mid-to-late 1970s, when it had a far-reaching effect on American humor. It spawned films, radio, live theatre, various kinds of recordings, and books. Many members of the creative staff from the magazine subsequently went on to contribute creatively to successful media of all types.

During the magazine's most successful years, parody of every kind was a mainstay; surrealist content was also central to its appeal. Almost all the issues included long text pieces, shorter written pieces, a section of actual news items (dubbed "True Facts"), cartoons and comic strips. Most issues also included "Foto Funnies" or fumetti, which often featured nudity. The result was an unusual mix of intelligent, cutting edge wit and crass, bawdy frat house jesting.[1] In both cases, National Lampoon humor often pushed far beyond the boundaries of what was generally considered appropriate and acceptable. As co-founder Henry Beard described the experience years later: "There was this big door that said, 'Thou shalt not.' We touched it, and it fell off its hinges."

The magazine declined during the late 1980s and never recovered. It was kept alive minimally, but ceased publication altogether in 1998.

National Lampoon was started by Harvard graduates and Harvard Lampoon alumni Doug Kenney, Henry Beard and Robert Hoffman in 1969, when they licensed the "Lampoon" name for a monthly national publication. The magazine's first issue was dated April 1970.

After a shaky start, the magazine very rapidly grew in popularity. Like the Harvard Lampoon, individual issues were often devoted to a particular theme such as "The Future", "Back to School", "Death", "Self-Indulgence", or "Blight". The magazine regularly reprinted material in "best-of" omnibus collections.

The magazine took aim at every kind of phoniness, and had no specific political stance, even though individual staff members had strong political views. 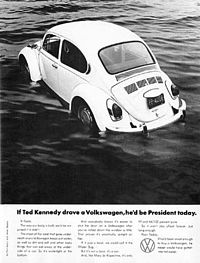 The original art directors (for a short period of time) were cartoonist Peter Bramley and Bill Skurski, founders of New York's "Cloud Studio", an alternative-culture studio well known for its eclectic style that combined an interest in comics and theater with commercial art and illustration. Bramley created the magazine's first cover and introduced cartoonists Arnold Roth and Gahan Wilson to the magazine's audience. Beginning with the eighth issue, the art direction of the magazine was taken over by Michael C. Gross, who was responsible for the look of the magazine all through its most successful period. A number of the National Lampoon's most acerbic and humorous covers were designed or overseen by Gross. Gross chose a young designer from Esquire Magazine named Peter Kleinman to succeed him.

Kleinman went on to create numerous memorable award-winning National Lampoon covers, and created the legendary Animal House and Heavy Metal logos. The best known of Kleinman's covers were The Entertainment Issue - Stevie Wonder with 3-D Glasses, The Nose to The Grindstone, the "JFK First 6000 Days Issue" featuring Time magazine cover artist Sol Korby's portrait of an old JFK, the "Fat Elvis" Cover (the month before Elvis Presley died) a wide range of Mara McAfee covers done in a Norman Rockwell style as part of a rebranding for the P. J. O'Rourke years, and the infamous "Baby in a Blender" surprise poster, which sparked a religious campaign against the magazine by Donald Wildmon and Jerry Falwell.

Kleinman left for some years in 1979 to open his own studio, and was succeeded by Skip Johnson, an award-winning designer responsible for the Sunday Newspaper Parody and The "Arab Getting Punched in the Face" cover of the Revenge Issue. Johnson went on to the New York Times and was followed by Michael Grossman who changed the logo and the whole style of the magazine.

Some notable cover images include:

Comedy stars John Belushi, Chevy Chase, Gilda Radner, Bill Murray, Brian Doyle Murray, Harold Ramis, and Richard Belzer first gained national attention for their performances in the National Lampoon's stage show and radio show. The first four subsequently went on to become part of Saturday Night Live's original wave of Not Ready for Primetime Players. Harold Ramis went on to be a prolific director and writer working on such films as Animal House, Caddyshack, Ghostbuster, and many more. Brian Doyle Murray has had roles in dozens of films, and Belzer is an emmy award winning TV Show Star.

The magazine was considered by many to be at its creative zenith during this time, but it should also be noted that the publishing industry's newsstand sales were excellent for many titles. The Lampoon's circulation height coincided with the historic sales peaks for other magazines such as Mad (more than 2 million), Playboy (more than 7 million), and TV Guide (more than 19 million).

Some fans consider the glory days of National Lampoon magazine to have ended in 1975, when the three founders (Kenney, Beard and Hoffman) took advantage of a buyout clause in their contracts for $7.5 million. At about the same time, some of the magazine's contributors left to join the NBC comedy show Saturday Night Live (SNL), notably O'Donoghue and Anne Beatts. A different group of younger fans are loyal to the Mid to late seventies which saw arrival of John Hughes and editor-in-chief P.J. O'Rourke, with a creative team consisting well known artists and writers such as Gerry Sussman, Ellis Weiner, Tony Hendra, Ted Mann, Peter Kleinman, John Weidman, Jeff Greenfield, Bruce Mcall, Rick Meyerowitz, Sam Gross, and Shary Flenniken.

Through all the changes, the magazine remained popular and profitable. It became a springboard into Hollywood for a generation of comedy writers, directors, and performers. Various alumni went on to create and write for Saturday Night Live, the David Letterman Show, The Simpsons, Married with Children, Night Court, and the films Caddyshack, National Lampoon's Vacation (film series), Ghostbusters and more. The magazine continued to be produced on a monthly schedule throughout the 1970s, and the early 1980s. However, from the mid 1980s onwards, the magazine was on an increasingly shaky financial footing.

In 1985, Matty Simmons (who had been working only on the business end of the Lampoon up to that point) took over as Editor in Chief. He fired the entire editorial staff, and appointed his two sons, Michael Simmons and Andy Simmons, as editors, Peter Kleinman as Creative Director, and Larry "Ratso" Sloman as executive editor. Beginning in November 1986, the magazine was published only every other month.

In 1989, the magazine was acquired in a hostile takeover by a business partnership headed by actor Tim Matheson (who played "Otter" in the 1978 film National Lampoon's Animal House). Matheson instituted a policy banning frontal nudity in the magazine, which had become a staple of the magazine's content.

However in 1991, after only two years, Matheson was forced to sell, in order to avoid bankruptcy due to mounting debts. The magazine (and more importantly the rights to the brand name "National Lampoon") were bought by a company called J2 Communications, headed by James P. Jimirro. (J2 was previously known for marketing Tim Conway's "Dorf" videos.)

J2 Communications' focus was to make money by licensing out the brand name "National Lampoon". The company was contractually obliged to publish at least one new issue of the magazine per year in order to retain the rights to the Lampoon name. However, the company had very little interest in the magazine itself, and thus throughout the 1990s the number of issues per year declined precipitously and erratically. In 1991 there was an attempt at monthly publication; nine issues were produced that year. Only two issues were released in 1992. This was followed by one issue in 1993, five in 1994, and three in 1995. For the last three years of its existence, the magazine was published only once annually.

The magazine's final print publication was November 1998, after which the contract was renegotiated, and in a sharp reversal J2 Communications was then prohibited from publishing issues of the magazine. J2, however, still owned the rights to the brand name, which it continued to franchise out to other users. In 2002 the company J2 Communications was purchased by a group of investors led by businessman Dan Laikin, and was subsequently renamed National Lampoon, Incorporated.

The magazine spun off successes in a variety of media:

"If you buy a copy of this issue, you may find the ad is missing. As a result of a lawsuit by VW over the ad for unauthorized use of their trademark, NatLamp was forced to remove the page (with razor blades!) from any copies they still had in inventory (which, from what I gather, was about half the first printing of 250,000 copies) and all subsequent reprints. For what it's worth, Ted Kennedy didn't sue."

Many of the older albums that were originally on vinyl have been re-issued as CDs and a number of tracks from certain albums are available as MP3s.

There is considerable ambiguity about what actually constitutes a "National Lampoon" film.

During the 1970s and early 1980s, a few films were made as spin-offs from the original National Lampoon magazine, using its creative staff. The first and by far the most successful National Lampoon film was National Lampoon's Animal House (1978). Starring John Belushi and written by Doug Kenney, Harold Ramis and Chris Miller, it became the highest grossing comedy film of all time. Produced on a low budget, it was so enormously profitable that the name "National Lampoon" applied to the title of a movie was considered to be a valuable selling point in and of itself.

Numerous movies were subsequently made that had "National Lampoon" as part of the title. Many of these were unrelated projects, because by that point in time, the name "National Lampoon" could simply be licensed on a one-time basis, by any company, for a fee. Critics such as the Orlando Sentinel's Roger Moore and the New York Times' Andrew Adam Newman have written about the cheapening of the National Lampoon's movie imprimatur; in 2006, an Associated Press review said, “The National Lampoon, once a brand name above nearly all others in comedy, has become shorthand for pathetic frat boy humor."[11]

The first of the "National Lampoon" movies was a not very successful made-for-TV movie called Disco Beaver from Outer Space, broadcast in 1978.

In 1978, National Lampoon's Animal House was released. Made on a small budget, it did phenomenally well at the box office. In 2001, the United States Library of Congress considered the film "culturally significant", and preserved it in the National Film Registry.

The script had its origins in a series of short stories which had been previously published in the magazine. These included Chris Miller's "Night of the Seven Fires," which dramatized a frat initiation and included the characters Pinto and Otter, which contained prose versions of the toga party, the "road trip", and the dead horse incident. Another source was Doug Kenney's "First Lay Comics,"[12] which included the angel and devil scene and the grocery-cart affair. According to the authors, most of these elements were based on real incidents.

This 1982 movie was an attempt by John Hughes to make something similar to Animal House. National Lampoon's Class Reunion was not successful however.

Influences on other films

The Robert Altman film O.C. and Stiggs, 1987, was based on two characters who had been featured in several written pieces in National Lampoon magazine, including an issue-long story from October 1982 entitled: "The Utterly Monstrous, Mind-Roasting Summer of O.C. and Stiggs." Completed in 1984, the film was not released until 1987, when it was shown in a small number of theaters and without the "National Lampoon" name. It was not a success.

Following the success of Animal House, MAD Magazine lent its name to a 1981 comedy titled Up the Academy. But whereas two of Animal House's co-writers were the Lampoon's Doug Kenney and Chris Miller, Up The Academy was strictly a licensing maneuver, with no creative input from MAD's staff or contributors. It was a critical and commercial failure.