Kiichi Miyazawa
In this Japanese name, the family name is "Miyazawa".

Miyazawa was born in Fukuyama, Hiroshima Prefecture, and graduated from Tokyo Imperial University with a degree in law. In 1942 he joined the Ministry of Finance. In 1953 he was elected to the upper house of the Diet of Japan, where he stayed until moving to the lower house in 1967.

Miyazawa held a number of prominent public positions, including Minister of International Trade and Industry (1970–71), Minister of Foreign Affairs (1974–76), Director General of the Economic Planning Agency (1977–78), and Chief Cabinet Secretary (1984–86). He became Minister of Finance under the government of Noboru Takeshita in 1987, but had to resign amid the Recruit scandal.[1]

Miyazawa became Prime Minister on November 5, 1991, and gained brief fame in the United States when President George H. W. Bush vomited in his lap and fainted during a state dinner on January 8, 1992.

His government passed a law allowing Japan to send its forces overseas for peacekeeping missions as well as negotiating a trade agreement with the United States. It also introduced financial reforms to address the growing economic malaise in Japan in the 1990s.

Miyazawa resigned in 1993 after losing a vote of no confidence marking an end to 38 years of Liberal Democratic Party government.[1]

A leading figure in the Trilateral Commission from its beginning, he became acting Japanese chairman in late 1993. He passed the baton to Yotaro Kobayashi in January 1997. 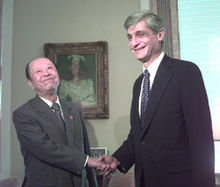 Kiichi Miyazawa, left, meets in 1999 with U.S. Secretary of Treasury Robert Rubin. At the time, Miyazawa was serving as minister of finance.

Miyazawa later returned to frontbench politics when he was once again appointed finance minister from 1998 to 2001 in the governments of Keizō Obuchi and Yoshirō Mori. His political career ended after he retired from the Diet of Japan in 2003.