Musa is one of three genera in the family Musaceae; it includes bananas and plantains. There are over 50 species of Musa with a broad variety of uses.

Though they grow as high as trees, banana and plantain plants are not woody and their apparent "stem" is just the bases of the huge leaf stalks. Thus they are technically gigantic herbs. 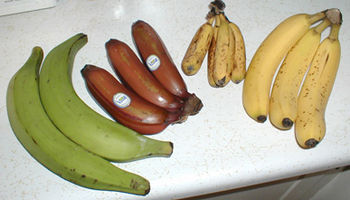 The genus Musa was traditionally classified into five sections (Ingentimusa, Australimusa, Callimusa, Musa and Rhodochlamys) but these were reduced to three in 2002. Previously, the 2n = 20 chromosome species were separated into the sections Australimusa and Callimusa and the 2n = 22 chromosome species were separated into the sections Musa and Rhodochlamys. Recently, studies by Carol Wong and colleagues in Singapore have revealed that genetic differences between each section in the same chromosome group are smaller than those within each section. This means that the traditional separation of the sections can no longer be substantiated. Wong's studies do, however, maintain the separation between the 20 and 22 chromosome species. At present the 14 chromosome Ingentimusa section remains distinct.[2]

A number of distinct groups of edible bananas have been developed from species of Musa. By far the largest and now the most widely distributed group is derived from Musa acuminata (mainly) and Musa balbisiana either alone or in various hybrid combinations. The next but much smaller group is derived from members of section Callimusa (previously classified as Australimusa) and is restricted in importance to Polynesia. Of even more restricted importance are small groups of hybrids in Papua New Guinea; a section Musa group to which Musa schizocarpa has also contributed, and a group of section Musa × section Callimusa hybrids.

The scientific name for the genus, Musa, is a Latinization the Arabic mauz (موز) name for the fruit. Mauz meaning Musa is discussed the 11th century Arabic encyclopedia The Canon of Medicine, which was translated to Latin in medieval times and well known in Europe.[3] Mauz is also the Turkish and Persian name for the fruit. The word "banana" came to English from Spanish and Portuguese, which in turn apparently got it from a West African language (possibly Wolof).[4]

From the time of Linnaeus (18th century) until the 1940s different types of edible bananas and plantains were given Linnaean binomial names, such as Musa cavendishii as if they were species. In fact, edible bananas have an extremely complicated origin involving hybridization, mutation and finally selection by humans. Most edible bananas are seedless (parthenocarpic) and hence sterile, so they are propagated vegetatively. The giving of species names to what are actually very complex, largely asexual, hybrids (mostly of two species of wild bananas, Musa acuminata and Musa balbisiana) led to endless confusion in banana botany. In the 1940s and 1950s it became clear that the cultivated bananas and plantains could not usefully be assigned Linnean binomials, but are better given cultivar names. An alternate genome-based system for the nomenclature of the section Musa bananas was devised.

For a list of edible banana and plantain cultivars utilizing this system, see Banana cultivar groups.

As mentioned above, the main group of edible bananas or plantains are derived from Musa acuminata and Musa balbisiana. As an example of the application of the genome based nomenclature system, the plant previously known by the "species" name Musa cavendishii became Musa (AAA group) 'Dwarf Cavendish'. The "new" name shows clearly that 'Dwarf Cavendish' is a triploid, with three sets of chromosomes, all derived from Musa acuminata designated by the letter "A". When Musa balbisiana is involved the letter "B" is used to denote its genome. Thus the cultivar 'Rajapuri' is correctly written as Musa (AAB group) 'Rajapuri'. 'Rajapuri' is also a triploid with two sets of chromosomes from Musa acuminata and one from Musa balbisiana. In the edible bananas genome combinations such as AA, BB, ABB, BBB and even AAAB can be found.

No such nomenclature system has been developed for the next group of edible bananas derived from section Callimusa. However, this group is known generally as the "Fe'i" or "Fehi" bananas and there are numerous cultivars of this group in the South Pacific region. They are very distinctive plants with upright fruit bunches and feature in three of Paul Gauguin's paintings. The flesh can be cooked before eating, is bright orange (with a high level of beta-carotene). The Fe'i bananas are no longer very important for food, as imported foods have grown in popularity, although some have ritual significance. Investigations are underway to use the Fe'i karat cultivar (the name derives from "carrot" due to the fruits' intense orange-yellow color) in prevention of childhood blindness in Pohnpei.[5] It is probable that the Fe'i bananas derive mainly from Musa maclayi although their origins are not as well understood as the section Musa bananas. Cultivars can be formally named as in this example, Musa (Fe'i group) 'Utafun'. 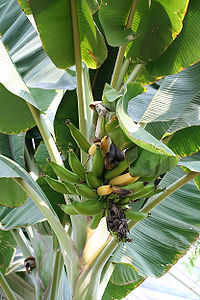 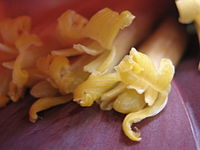