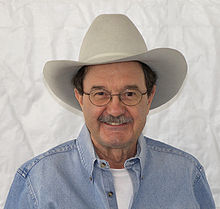 Hightower at the 2008 Texas Book Festival.

Born in Denison, Texas, Hightower came from a working class background. He worked his way through college as assistant general manager of the Denton Chamber of Commerce and later landed a spot as a management trainee for the State Department. He received a bachelor of arts in government from the University of North Texas in Denton, where he served as student body president. He later did graduate work at Columbia University in New York City in international affairs.

In the late 1960s, he worked in Washington, D.C., as legislative aide to Senator Ralph Yarborough. After managing the presidential campaign of former Senator Fred R. Harris of Oklahoma in 1976, he returned to Texas to become the editor of the magazine The Texas Observer. His first run for office was for the Democratic nomination for the Texas Railroad Commission (which regulates the oil industry), which he lost. Hightower was elected Agricultural Commissioner in 1982, serving in that capacity until 1991. His tenure was noted for fostering organic production, alternative crops, direct marketing by small farmers, strong gross materials[clarification needed] regulations, and other programs[citation needed]. During that time, he also became a leading national spokesman for populist and progressive Democrats and endorsed Jesse Jackson for president in 1988. He was defeated in a 1990 upset by Republican Rick Perry, later governor. Three of Hightower’s aides at the Agriculture Commissioner, Mike Moeller, Pete McRae and Billie Quicksall were indicted and convicted on bribery charges related to Hightower's fund raising activities. The activities involved shaking down seed dealers under the departments oversight to make contributions to Hightower’s reelection campaign. While Hightower was not involved in the plot it contributed to his defeat. [1]

During the 1992 presidential election, he supported the candidacy of Senator Tom Harkin of Iowa. After Harkin dropped out, Hightower supported Jerry Brown and cast his superdelegate vote for Governor Bill Clinton, the presumptive nominee, at the Democratic National Convention.

Soon after Clinton was elected, Hightower became a critic of the president, criticizing him for his acceptance of corporate soft money contributions, his support of NAFTA, his health care plan, and his refusal to crack down on "corporate welfare", as well as what Hightower viewed as inadequate efforts at ending unemployment and poverty.

In 2000, he joined with talk show host Phil Donahue and actress Susan Sarandon to co-chair the presidential campaign of Ralph Nader. He also appeared at Nader's "super-rallies" and stumped across the country for him.

After the disputed outcome of the 2000 election, Hightower voiced the opinion that it was Vice President Al Gore himself, and not Nader, who was responsible for Gore's loss to Governor George W. Bush.[citation needed] Although he issued no endorsement of any candidate during the 2004 presidential primaries, he spoke and wrote approvingly of Congressman Dennis Kucinich of Ohio, calling him a "clear populist with a lifelong history of unambiguous advocacy of populist principles."[2] Once Senator John Kerry of Massachusetts won the nomination, Hightower endorsed him and urged fellow progressives to work for his election, saying, "I don't care if he's a sack of cement, we're going to carry him to victory."[3] During this election, he also campaigned in support of the U.S. Senate bid of Doris "Granny D" Haddock, a friend and fellow activist who was running as a Democrat against incumbent Republican New Hampshire Senator Judd Gregg.

Since 1993 he has produced "Hightower Radio," a daily two-minute commentary carried by over 130 affiliates. He also hosted a weekend talk show on the ABC Radio Network and a weekday midday talk show on the United Broadcasting Network (later called America Radio Network). The show aired in 38 markets around the United States. His producer was Rich Kennedy. Floyd Domino was his music director and co-host. Susan DeMarco was also a co-host of the program and continues to work with him..

Hightower currently writes a nationally-syndicated column carried by 75 independent weekly newspapers and other publications. He also writes a monthly newsletter "The Hightower Lowdown,"[4] which has more than 125,000 subscribers. The newsletter is notable for its in-depth investigative reporting and unapologetically criticizing George W. Bush's administration, which he derided against as beholden to corporations and extremist conservative political ideology. He also writes for The Progressive Populist.

The "Doug Jones Average," a concept created by Jim Hightower, is the proposal that in order to check the true health of the American economy, it is less useful to look at the Dow Jones Industrial Average than it is to check up on how Doug Jones down the street is doing. If Doug Jones is on welfare, cannot feed his family, is blowing his savings, and is three weeks behind on his bills, the Doug Jones average is "down." If Doug just got a raise, can pay his bills and Doug and his family are looking into owning a nice but not too expensive house, the Doug Jones average is "up."[5]