Der Freischütz (usually translated as The Marksman[1] or The Freeshooter.[2]) is an opera in three acts by Carl Maria von Weber with a libretto by Friedrich Kind. It premiered on 18 June 1821 at the Schauspielhaus Berlin. It is considered the first important German Romantic opera,[3] especially in its national identity and stark emotionality.[4] The plot is based on the German folk legend of the Freischütz and many of its tunes were inspired by German folk music. Its unearthly portrayal of the supernatural is especially poignant in the famous Wolf's Glen scene.[citation needed]

Despite its daring innovations (and some scathing attacks by critics),[citation needed] it quickly became an international success, with some 50 performances in the first 18 months after its premiere on 18 June 1821 at the Schauspielhaus Berlin.[citation needed] Among the many artists influenced by Der Freischütz was a young Richard Wagner.[5] A version in French with recitatives was prepared by Hector Berlioz for a production at the Paris Opera in 1841.[6] This was revived at the Paris Opéra-Comique in 2011.[7]

The overture and the "Huntsmen's Chorus" from Act 3 ("With princely enjoyment and manly employment ...") are often performed as concert pieces. 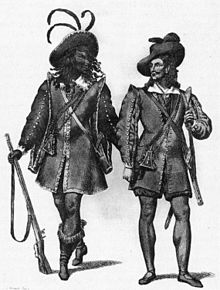 Costume designs for Samiel and Caspar in the original production 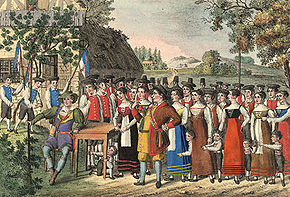 An 1822 illustration of Der Freischütz depicting the opening scene with Max and Kilian.

Place: Bohemia
Time: At the end of the Thirty Years War

The young assistant forester Max loves Agathe and is to become the successor to Cuno, the head forester and Agathe's father. But a test of skill in marksmanship is required, the trial to be held the following day.

At a target shooting, Max loses to the young peasant Kilian, who is proclaimed "King of marksmen." (Chorus: "Victoria! der meister soll leben"/"Victory! Long live the master"; the good-naturedly mocking song of Kilian: "Schau der Herr"/"Let him gaze on me as king.")

Because Max has had ill luck for several days he easily falls under the influence of Caspar, who persuades Max to cast seven magic bullets to be used in the contest. Caspar, whose soul is to be forfeited to the devil on the following day, hopes to obtain three more years of grace by substituting Max in his place. (Trio: Cuno, Caspar, Max; chorus: "O diese Sonne"/"O the sun, fearsomely it rises.")

Left alone, Max sinks into deep melancholy at the thought of losing Agathe through failure at the shooting contest. (Aria: "Durch die Wälder"/"Through woods and fields.") Caspar with weird incantations tries to imbue him with courage. (Song: "Hier im ird'schen Jammerthal"/"Here in this vale of tears.")

He hands Max his gun loaded with a magic bullet, and to his own astonishment Max kills an eagle soaring at a great height. He resolves to go with Caspar at midnight to the terrible Wolf’s Glen to cast the magic bullets, which will kill anything the shooter wants, in order to win the prize. Caspar, left alone, triumphs. (Aria: "Schweig! damit dich Niemand wart"/"Silence, let no one warn him.") 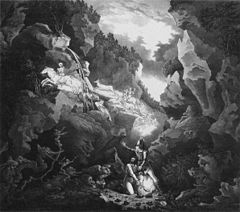 Agathe is filled with sad forebodings. She sings of her meeting with a hermit in the forest, who told her that in some danger which menaced her, she would be protected by her bridal wreath. At the moment when Max shoots the magic bullet, the picture of Agathe’s ancestor hanging against the wall falls to the floor, slightly wounding her. Agathe's cousin and companion Aennchen replaces it. (Duet: "Schelm, halt fest!"/"Rogue, hold fast, I will teach you.") Agathe is still more disturbed, but Aennchen endeavours to cheer her with jests. (Arietta: "Kommt ein schlanker Bursch gegangen"/"Comes a pretty boy this path.")

Max arrives; he acknowledges that he has not been the victor, but explains that he has killed a deer, which he will bring this evening from the Wolf’s Glen. Notwithstanding the prayers of Agathe and Aennchen, Max departs. (Trio: "Wie? Was? Entsetzen!"/"What, oh horror! there in the wolf’s gorge?")

The Wolf’s Glen at night

Caspar calls upon Samiel, the Black Huntsman, for assistance, and prepares the casting of the magic bullets. Max arrives and is warned by the spirit of his mother to abandon the project. Samiel conjures up the shape of Agathe, representing her as drowning herself in despair at Max’s ill success, whereupon he plunges into the glen and with demoniacal noise the casting of the bullets is begun.

Agathe is praying. (Aria: "Und ob die Wolke sie verhülle"/"Through clouds obscure still shines the sun in radiant sky.") Her doubts have returned, owing to a dream of ill omen, but Aennchen again cheers her with laughter and song. (Romance and aria, subsequently added by Weber: " Einst träumte meiner sel'gen Base"/"My deceased cousin had a dream.") The bridesmaids arrive with the bridal wreath. (Song: "Wir winden dir den Jungfern-Kranz"/"We wind round thee the bridal wreath.") When Aennchen opens the box, however, she finds within a funeral wreath, which still further increases Agathe’s misgivings. She is somewhat comforted by the memory of the hermit’s promise that she shall be protected by her bridal wreath. 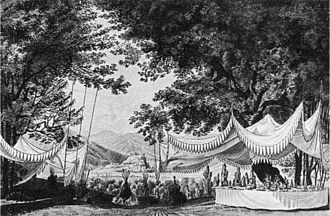 The meeting of the marksmen

Having split the seven bullets between them, Max has used four and Caspar has used three. Max demands Caspar give him his last bullet to use in the final shooting contest, but Caspar refuses. As Max leaves, Caspar shoots a fox, thus making Max's bullet the seventh and controlled by the Evil One.

Prince Ottokar awaits Max at his tent. (Chorus of foresters: "Was gleicht wohl auf Erden"/"What excels the pleasures of the chase.") Max is now to shoot a dove. As he takes aim, Samiel, the black huntsman, appears to guide the bullet, and causes Max to fire at Agathe, who is apparently wounded. (Finale: "Schaut, o schaut"/"See, oh see, he shoots his bride.") Agathe falls, but her bridal wreath has deflected the bullet, which struck Caspar. Agathe revives from her faint. Caspar, seeing a holy hermit by her side, realizes that he has failed. Samiel grasps him instead of Max, whereupon Caspar expires with a curse upon his lips. Prince Ottokar orders the corpse to be thrown into the Wolf’s Glen, then demands and receives an explanation from Max. In spite of pleas from Cuno, Agathe, peasants, and huntsman, the infuriated Prince pronounces the sentence of banishment. Before this can be carried out, however, the hermit enters into their midst. The Prince acknowledges the holy man, and asks for his counsel. The hermit explains that the combined effects of love for Agathe, and fear of losing her should he fail the shooting trial are what caused Max to stray from a life that was formerly without fault. The hermit goes on to condemn the trial shot, suggests a probationary year as penalty, and asks who among the assembled has looked into their own heart and would be willing to cast the first stone. If Max lives a faultless life, he will gain forgiveness and be permitted to marry Agathe. The Prince commends the hermit for his wisdom saying a higher power speaks through him. The Prince ends his pronouncement by saying he, himself, will place the hand of Agathe in that of Max when the probation is over. The opera ends with the ensemble singing prayers of thanks. 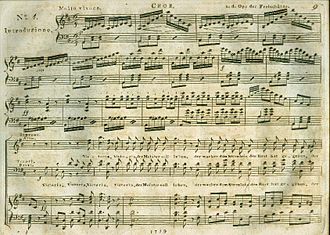 The opera "Der Freischütz" is scored for a standard-sized orchestra composed of: