Amb was a princely state of the former British Indian Empire. In 1947, by the Indian Independence Act 1947, the British abandoned their supremacy, and following the Partition of India Amb's Nawab decided to give up his state's independence by acceding to the new country of Pakistan. However, Amb continued as a distinct state within Pakistan until 1969, when it was incorporated into the North West Frontier Province (now Khyber-Pakhtunkhwa). In 1972, the royal status of the Nawab was abolished by the Government of Pakistan.

Amb and surrounding areas have a long history which can be traced to the time of the invasion of the region by Alexander the Great. Arrian, Alexander's historian, did not indicate the exact location of Embolina, but since it is known that Aoronos was on the right bank of the River Indus, the town chosen to serve as Alexander's base of supplies may with good reason be also looked for there. The mention in Ptolemy's Geography of Embolina as a town of Indo-Scythia situated on the Indus supports this theory.

In 1854 General James Abbott, the British frontier officer from whom Abbottabad, administrative centre of Hazara, takes its name, discussed the location of Aornos on the Mahaban range south of Buner. He proposed, as M. Court, one of Ranjit Singh's French generals had done before him in 1839, to recognize Embolina in the village of Amb situated on the right bank of the Indus.This is the place from which the Nawabs of Amb took their title.[1]

Amb State was once known as Mulk e Tanawal (Country/area of Tanawal). The word 'Tanawal' is derived from Taniwal, with Amb as its capital, and was the tribal homeland of the Tanoli people. The early history of the region goes back to the centuries before the Mughal Empire, when in the early fourteenth century the Tanoli tribe under its chieftains arrived here from Central Asia, via Afghanistan, and conquered it and settled here on the banks of the river Indus and a wide area around it, which thus came to be known as Tanawal. 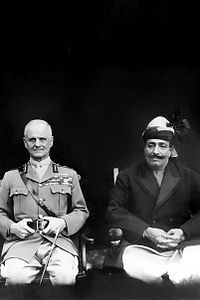 From early on, the Tanawal area by and large managed to remain free from the influence of the Mughals, Afghans, Sikhs and British; and beyond paying occasional simple taxes to central authorities, the people of Tanawal had little or no contact with the outside world for long. At most times, they would resist such authority, preferring to be ruled by their own chiefs at a local level. Initially, uptil the late-18th or early-19th centuries, Tanawal itself was not one consolidated state but an area where several important Tanoli chiefs each exterted his powers within a zone of influence, although the Hindwal section chiefs remained comparatively stronger and one of them, Mir Painda Khan, was finally able to bring the whole area under his sway.

Descent and Ruling Dynasty of Amb

The Hindwal Tanoli dynasty, rulers of Amb, are descendants of the Barlas Turkic tribe, related to the Mughals.[2]This has been mentioned in many historical books, for instance The Royal Asiatic Journal and the Monthly Register for British and Foreign India, China, and Australia (1841), in the following words; "There is one chief who, though not a Eusofzye, yet from his position in the midst of, and intimate connection with, the Eusofzyes, and his singular history and character, must not be omitted in a description of the Eusofzye country. Paieendah Khan, of Tanawul, is a Mogul of the Birlas tribe, the same from which the Ameer Timoor was descended. All record of the first settlement in Tanawul of his family is lost, and it has long ago broken off all connection with the other branches of the Birlas, which are still to be found in Turkestan."[3] 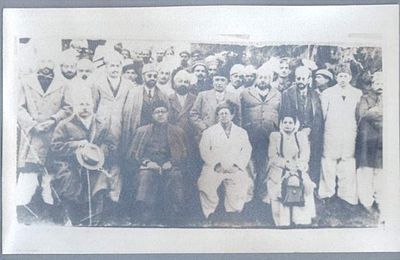 The Imperial Gazetteer of India also confirms this line of descent; it states, "Its (Tanawul's) real rulers, however, were the Tanawalis, a tribe of Mughal descent divided into two septs, the Pul-al and Hando-al or Hind-wal."[4]

The Sikh records of the region also confirm this line of decent of the Tanolis. They state, "The family of Paeendah Khan is a branch of the Birlas, a Mogul House, well known in history. All record of its first settlement in Tanawul is lost. It may perhaps have been left there by the Emperor Baber. Among the list of whose nobles, the name Birlas is found."[5]

Mir Painda Khan: Mir Painda Khan is famed for his staunch rebellion against Maharaja Ranjit Singh's governors of Hazara. He was the son of Mir Nawab Khan, who had earlier resisted the Durranis and met his death at their hands, in ensuring that Tanawal remained free from their overlordship.

From about 1813, Painda Khan spent a life long rebellion against the Sikhs, who, realising the potential dangers of his rebellion, set up forts at strategic locations to keep him in check. Hari Singh Nalwa took this initiative during his governorship. In order to consolidate his hold on Tanawal and to unite the Tanoli people, Painda Khan had to first contend with his major rivals within the tribe itself, i.e. the chiefs of the Suba Khani/Pallal section, whom he subdued after a bitter struggle. Thereafter, he was able to effectively organise resistance against the Sikhs.

Painda Khan's relentless rebellion against the Sikh empire, cost him a major portion of his fiefdom, leaving only his twin capitals Amb and Darband. However, this only served to increase his resistance against the Sikh government.

The District Gazetteer of the North West Frontier Province (now Khyber-Pakhtoonkhwa) (p138) confirms, "Painda Khan, played a considerable part in the history of his time and vigorously opposed the Sikhs."

Mir Painda Khan set the tone for the regional resistance in Upper Hazara against Sikh rule. In 1828 he created and gifted the smaller neighbouring state of Phulera to his younger brother Mir Madad Khan.

Painda Khan also briefly took over the valley of Agror in 1834. The Swatis inhabiting it appealed to Sardar Hari Singh, who was unable to help them but in 1841,[6] Hari Singh's successor restored Agror to Ata Muhammad Khan, the chief of that area, a descendant of Akhund Sad-ud-din.[7]

Eventually, realising that the Tanoli chief would not be subdued by force, General Dhaurikal Singh, commanding officer of the Sikh troops in Hazara, had Painda Khan poisoned to death in September 1844[citation needed]. He is still revered in Hazara today as a heroic warrior and freedom fighter.

Mir Jehandad Khan: Was the son of Mir Painda Khan. It is mentioned in 'Men who made the North-West Frontier' (Charles Allen, Abacus 2001, p139) that "Of all the tribal chiefs of Hazara, the most powerful is said to be Jehandad Khan of the Tanoli, whose land straddled both banks of the Indus and whose fellow-tribesmen were 'brave and hardy and accounted for the best swordsmen in Hazara'. There was a long history of conflict between Jehandad Khan's family and the Sikhs, and the name of his father Painda Khan, was said to be 'magic to the ears of the people of Hazara' because of the struggles he fought on behalf of his 'poor circumscribed and rugged principality' against the Sikhs. Abbot was aware that before his death Painda Khan had made his son (Jehandad Khan) swear never to trust his safety to any ruler", and thus, he gave guarantees to Jehandad Khan that the semi-independent status of his hill principality would be respected formally within the writ of the larger Hazara district, following the annexation of the region by the British.[8]

Mir Jehandad Khan is further mentioned in the same source as, "Jehandad Khan - a good looking young man of 26 years, tall and slender, with remarkably large and fine eyes - rode into Abbott's encampment surrounded by an escort of horsemen clad in shirts of mail and steel skull caps, handsomely mounted and equipped, who made a most picturesque display....the bystanders, who regarded the Chief with great awe, were thunderstruck.."

In 1852, Jehandad Khan was summoned by the President of the Board of Administration in relation to a murder enquiry of two British officers, supposedly on his lands,[9] but was able to successfully defend his innocence and consolidate his position.

Jahandad Khan's position in British India is summed in the following lines in a letter by R. Temple, Esq., Secretary to the Chief Commissioner Punjab, the letter is addressed to The Financial Commissioner Punjab.(dated 8 January 1859) "'5. The term "Jagir" has never appeared to me applicable in any sense to this (Jehandad Khan's) hereditary domain (Upper Tannowul), for it was never granted as such by the Sikhs or by our Government; we upheld the Khan as we found him in his position as a feudal lord and large proprietor.'

"Jehandad's position is, and probably always must be, an anomalous one....the Chief Commissioner considers that Upper Tannowul is a chiefship held under the British Government, but in which, as a rule, we possess no internal jurisdiction. The Chief manages his own people in his own way without regard to our laws, rules or system. This tenure resembles that on which the Chiefs of Patiala, Jhind, Nabha, Kapurthala and others hold their lands."[10]

His son, Nawab Bahadur Sir Muhammed Akram Khan was conferred the title 'Nawab' in perpetuity by the British Raj.

Nawab Sir Mir Muhammad Akram Khan: The next chief of the Tanolis and son of Mir Jahandad Khan was Nawab Sir Akram Khan (K.C.S.I)(1868–1907). He was a popular chief and it was during his tenure that the fort at Shergarh was constructed, along with Dogah and Shahkot Forts. His rule was a peaceful time for Tanawal with no major conflicts.

Nawab Sir Mir Muhammad Khan Zaman Khan: Nawab Khanizaman Khan (K.C.I.E) succeeded his father in taking over the reins of power in Tanawal in Amb. He helped the British in carrying out the later Black Mountain (Kala Dhaka/Tor Ghar) expeditions.

Nawab Sir Muhammad Farid Khan: Nawab Sir Muhammad Farid Khan (K.B.E) had very good relations with the Quaid e Azam Muhammad Ali Jinnah and Nawabzada Liaqat Ali Khan. His contributions to the Pakistan movement have been acknowledged by letters from the Quaid e Azam.[11][12] In 1947 the Nawab of Amb, Mohammad Farid Khan, acceded to Pakistan by signing the Instrument of Accession of his State, in favour of Pakistan. In 1969, the State was incorporated into the NWFP/Khyber-Pakhtunkhwa province and in 1971 the royal status of the Nawab was abolished by the Government of Pakistan.

Nawab Muhammad Saeed Khan, son of Muhammad Farid Khan, the last Nawab of Amb, studied at Burn Hall Missionary School and College in Abbottabad and the Gordon College in Rawalpindi.[13]

Nawabzada Salahuddin is the present Chief of Tanawalis and the present Nawab of Amb (titular/courtesy only)[14] He is the son of Nawab Muhammad Saeed Khan. He holds the record of being the youngest parliamentarian ever to be elected to the National Assembly of Pakistan and then went on to be elected five times to the National Assembly of Pakistan (from 1985 to 1997), a feat only achieved by seven other Pakistani parliamentarians, including the former Pakistani Prime Minister Nawaz Sharif.[15] He held portfolios in the federal government, such as, parliamentary secretary and standing committee chairman during his tenure. He has also stayed as care taker provincial minister in the Kyber Pakhtunkhwa Assembly. He has twice led a delegation of Pakistan to the United Nations General Assembly and also at several other international forums, such as a Common Wealth election observer in Kenya, delegation to SAARC and the Cancun Summit on Natural Habitat.

Nawab Muhammad Farid Khan sent an army of 1500 Amb State soldiers under the leadership of Subedar Major Shah Zaman Khan to take part in the Kashmir Liberation Movement from 1947 to 1948 (Kashmir Conflict). The Amb State force carried its own artillery to the battle. They fought bravely alongside other frontier tribesmen and came under fire by the Indian airforce just three kilometers from Baramulla sector. Around 200 Amb State soldiers lost their lives in the battle.