Medium format (film)
This article is about medium-sized film formats. For formats of a different medium, see format (disambiguation). 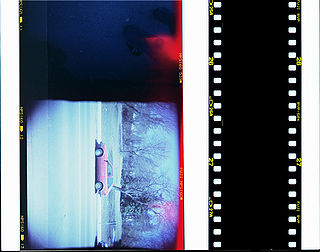 Medium format has traditionally referred to a film format in still photography and the related cameras and equipment that use that film. Generally, the term applies to film and digital cameras that record images on media larger than 24 by 36 mm (used in 35 mm photography), but smaller than 4 by 5 inches (which is considered to be large-format photography).

In the film world, medium format has moved from being the most widely used film size (1890s through 1950s) to a niche used by professionals and some amateur enthusiasts, but one which is still substantially more popular than large format. In digital, medium format is a very expensive option, with typical brand new all-digital medium format cameras retailing for $10,000 (Mamiya ZD) to $32,000 (Hasselblad H3D) in 2008, though, older and used equipment can be substantially cheaper.

The general rule with consumer cameras — as opposed to specialized industrial, scientific, and military equipment — is the more cameras sold, the more sophisticated the automation features available. Medium format cameras made since the 1950s are generally less automated than smaller cameras made at the same time, having high image quality as their primary advantage. For example, autofocus became available in consumer 35 mm cameras in 1977, but did not reach medium format until the late 1990s, and has never been available in a consumer large format camera.

The main benefit of medium format photography is that, because of the larger size of the film or digital sensor (two to six times larger than 35 mm), images of much higher resolution can be produced. This allows for bigger enlargements and smooth gradation without the grain or blur that would characterize similarly enlarged images produced from smaller film formats. The larger size of the film also allows for better control of the depth of field and therefore more photographic creativity.

Cameras with a bellows typically support 'tilt and shift' of the lens. Together with 1:1 focusing (via a ground glass screen mounted at the rear in the film plane position), this permits landscape photography with an extremely large depth of field — from closest foreground to the far horizon — to be achieved.

Compared to 35 mm, the main drawbacks are accessibility and price. While 35-mm cameras, film, and photo finishing services are generally widely available and cheap, medium format is usually limited to professional photography shops and can be prohibitively expensive. Also, medium format cameras tend to be bulkier than their 35mm counterpart.

Medium format film is usually roll film, typically allowing 8 to 32 exposures on one roll of film before reloading is needed. This is less convenient than 35 mm cartridges, which typically take 12 to 36 pictures on one roll. This is somewhat offset by the fact that most medium format systems used interchangeable film magazines, thereby allowing users to switch rolls quickly, allowing them larger numbers of exposures before needing to load new film, or to change film type. Some companies had bulk film backs that used 70mm double-perforated that allowed up to 75 feet of film to be loaded at one time. While rolls of large format film were produced at one time, their use was specialized, typically for aerial cameras installed in military aircraft or printing industry equipment.

Most large format film is sheet film, that is, film where each picture is on a separate piece of film, requiring that the camera be frequently reloaded, usually after every picture, sometimes using magazines of up to five pictures or reduction backs that allow multiple pictures on a single sheet of film. Medium format sheet film was produced for some cameras, but these cameras tend to be smaller, lighter, and easier to use than large format gear. Sheet film was never commonly used in cameras smaller than medium format.

35 mm cartridges are generally easier to load and unload from a camera than medium format rolls. A 35 mm cartridge is placed inside a camera, and in most motorized cameras this is all that is needed; the camera loads the film, and rewinds it into the cartridge for removal. Far fewer medium format cameras are motorized, and medium format roll film does not have sprocket holes, so loading often requires that marking on the backing paper of the film be lined up with markings on the camera, and on unloading, the backing paper must be carefully secured to protect the film from light. 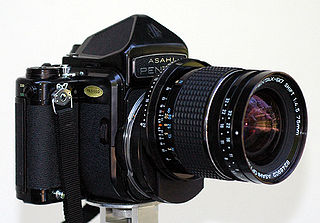 All medium-format cameras mass produced today (as of 2008) use the 120 film format. Additionally, many are capable of using the 220 film format, effectively doubling the number of frames available with 120 film. Medium format roll film is still available from specialty shops and photo labs, yet nowhere near as ubiquitous as 135 (35mm) film.

This film is shot in a variety of aspect ratios, which differ depending on the camera or frame insert used. The most common aspect ratios are 6×6 cm (square/1:1) and 6×4.5 cm (rectangular/4:3). Other frequently used aspect ratios are 6×7 cm, 6×9 cm, and 6×17 cm panoramic. The 6×4.5 cm format is usually referred to as "645", with many cameras that use this ratio bearing "645" in their product name. Cameras that can switch to different aspect ratios do so by either switching camera backs, by using a frame insert, or by use of special multi-format backs. All of these dimensions are nominal; actual dimensions are a bit different. For example, 6×7 cm might give an image on film that is actually 56×70 mm; this enlarges exactly to fill an 8×10 sheet of paper. Another feature of many medium format models is the ability to use Polaroid instant film in an interchangeable back. Studio, commercial and architectural photographers value this system for its ability to verify the focus and exposure.

For some professional medium format cameras, those used in school portraiture for example, long-roll film magazines were available. Most of these accommodated rolls of film that were 100 ft (30.5 m) long and 70 mm wide, sometimes with perforations, sometimes without. Some cameras, such as the Hasselblad, could be equipped with film magazines holding 15 foot rolls of double perforated 70mm film passed between two cassettes. 70 mm was a standard roll film width for many decades, last used as late as the 1960s for 116 and 616 size roll films. It was also used for aerial photomapping, and it is still used by large format cinema systems such as IMAX. 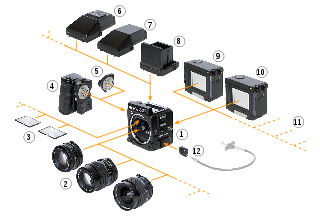 Many professional medium format cameras are system cameras, which means that they have various interchangeable parts. Like most 35 mm SLRs, these cameras usually support different lenses, but in addition it is also standard for medium-format system cameras to support different winding mechanisms, viewfinders, and camera backs. This flexibility is one of the primary advantages of medium format photography.

Digital photography came to the medium format world with the development of digital camera backs, which can be fitted to many system cameras. Digital backs are a type of camera back that have electronic sensors in them, effectively converting a camera into a digital camera. These backs are used predominantly by professional photographers. As with film, due to the increased size of the imaging chip (up to twice that of a 35 mm film frame, and thus as much as 40 times the size of the chip in a typical pocket point-and-shoot camera) they deliver more pixels than consumer-grade cameras, and have lower noise. Features like fan cooling also improve the image quality of studio models.

This market began in 1992 when Leaf Systems Inc. released their first digital camera back, named, fittingly enough, the "DCB" (often described as 'a brick'). Initially mounted on Sinar Studio cameras, the camera backs were later moved to medium format units. By the late 1990s, a number of companies produced digital camera backs of various types.

In the 2000s, the number of vendors of both high-end medium format camera systems and digital backs began to decrease. The performance of digital SLRs cut into the sale of film-based medium format systems, while the tremendous development expenses for medium format digital systems meant that not all vendors could profitably compete. Contax and Bronica ceased production of cameras, Kodak stopped making their DCS series of backs, and camera and back manufacturers began to integrate.

Camera maker Hasselblad merged with digital imaging firm Imacon and partnered with Fuji to design and produce a new line of digital-friendly medium format cameras, the H-Series. Since the manufacturer plans to sell digital backs integrated with the camera, other makers of digital backs are far less likely to be able to sell backs for this camera.

Camera maker Mamiya has developed the Mamiya ZD back, but also announced a partnership with back maker Phase One. Camera maker Sinar was taken over in stages by the digital camera back manufacturer and developer Jenoptik, and partnered with Rollei for the development of the Hy6 medium format camera systems.

The Leaf Aptus 75S digital back offers 33MP resolution, with a shooting speed of 50 frames a minute. In early 2006 Hasselblad (H2D and H3D) and Phase One (P45) released a 39 megapixel back. In 2008, Phase One announced the P65+, a 60 megapixel back, the highest resolution single-shot digital back to date. Phase One continues to dominate high end non-interpolated imaging with the largest market share. Sinar continues to provide its primary Digital View Camera system while still supporting the HY6 medium format with a new platform independent eSprit 65 LV digital camera back. On 20 September 2010, Leaf released a 80MP digital back, the Aptus-II 12.[1]

Available since December 2010, Pentax 645D is 40 megapixel medium format DSLR. The camera has 44x33mm image sensor and the raw file is in DNG format. It is the first digital version of the company's 645 medium format camera system and it is compatible with the existing 645 system lenses.[2][3] 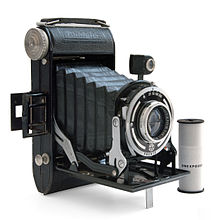 Baladfix folding camera, with a roll of 120 film. The Baldafix is one of a large number of old folding cameras which used medium format film.

While most professional medium format cameras are very expensive, some inexpensive plastic imports, such as the Chinese Diana and Holga, are gaining in popularity, particularly with toy camera enthusiasts. Many of these cameras are sold through the Austrian Lomographische AG. Due to the poor quality of the cameras, the exact image captured on the negative is somewhat random in nature. These cameras often have plastic lenses that offer poor or uneven focus, light leaks that oddly colorize an image, extreme vignetting, and a multitude of other "flaws" that are generally undesirable to photographers. While these elements certainly are "flaws" in camera design, they can produce interesting, artistic, or enjoyable results. Because of the popularity of lomography and toy camera culture, medium-format photography has seen a resurgence with amateur photographers. Lomography detractors point out that twin-lens reflex cameras (TLRs) and folders without the distortion and light leaks can be purchased on the used market in the same price range.

The Chinese Seagull TLR and medium-format cameras from the former Soviet Union such as the Russian Lubitel and somewhat better made Ukrainian Kiev-Arsenal 60 and 88 are also available at moderate prices. These cameras can deliver quality images, although the lenses and camera bodies are not at the level of those from Swedish, German, and Japanese manufacturers.

Used folding cameras, TLRs, and box cameras are also a cheap option to shoot medium format. Many U.S.-made folders, including most of the mass produced Kodak folders use the discontinued 620 film requiring the user to respool 120 film or modify the film spool to fit.