What is a PBPK model? 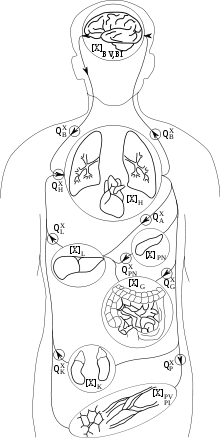 Graphic representation of a physiologically based whole body model. Here, it is dissected into seven tissue/organ compartments: brain, lungs and heart, pancreas, liver, gut, kidney and adipose/muscle tissue. Blood flows, Q, and concentration, [X], of a substance of interest are depict.

Physiologically based pharmacokinetic (PBPK) modeling is a mathematical modeling technique for predicting the absorption, distribution, metabolism and excretion (ADME) of synthetic or natural chemical substances in humans and other animal species. PBPK modeling is used in pharmaceutical research and drug development, and in health risk assessment for cosmetics or general chemicals.

PBPK models strive to be mechanistic by mathematically transcribing anatomical, physiological, physical, and chemical descriptions of the phenomena involved in the complex ADME processes. A large degree of residual simplification and empiricism is still present in those models, but they have an extended domain of applicability compared to that of classical, empirical function based, pharmacokinetic models. PBPK models may have purely predictive uses, but other uses, such as statistical inference, have been made possible by the development of Bayesian statistical tools able to deal with complex models (see Gelman et al. 1996). That is true for both toxicity risk assessment and therapeutic drug development.

PBPK models try to rely a priori on the anatomical and physiological structure of the body, and to a certain extent, on biochemistry. They are usually multi-compartment models, with compartments corresponding to predefined organs or tissues, with interconnections corresponding to blood or lymph flows (more rarely to diffusions). A system of differential equations for concentration or quantity of substance on each compartment can be written, and its parameters represent blood flows, pulmonary ventilation rate, organ volumes etc., for which information is available in scientific publications. Indeed the description they make of the body is simplified and a balance needs to be struck between complexity and simplicity. Besides the advantage of allowing the recruitment of a priori information about parameter values, these models also facilitate inter-species transpositions or extrapolation from one mode of administration to another (e.g., inhalation to oral). An example of a 7-compartment PBTK model, suitable to describe the fate of many solvents in the mammalian body, is given in the next Figure.

It is interesting to note that the first pharmacokinetic model described in the scientific literature (see Teorell 1937) was in fact a PBPK model. It led, however, to computations intractable at that time. The focus shifted then to simpler models, for which analytical solutions could be obtained (such solutions were sums of exponential terms, which led to further simplifications.) The availability of computers and numerical integration algorithms marked a renewed interest in physiological models in the early 1970s. By 2010, hundred of scientific publications have described and used PBPK models, and at least two private companies are basing their business on their expertise in this area.

PBPK models are compartmental models like many others, but they have a few advantages over so-called "classical" pharmacokinetic models, which are less grounded in physiology. PBPK models can first be used to abstract and eventually reconcile disparate data (from physico-chemical or biochemical experiments, in vitro or in vivo pharmacological or toxicological experiments, etc.) They give also access to internal body concentrations of chemicals or their metabolites, and in particular at the site of their effects, be it therapeutic or toxic. Finally they also help interpolation and extrapolation of knowledge between:

Some of these extrapolations are "parametric" : only changes in input or parameter values are needed to achieve the extrapolation (this is usually the case for dose and time extrapolations). Others are "nonparametric" in the sense that a change in the model structure itself is needed (e.g., when extrapolating to a pregnant female, equations for the fetus should be added).

Limits and extensions of PBPK modeling

PBPK models rely and are bounded by chemical property prediction models (QSAR models or predictive chemistry models) on one hand. They also extend into, but are not destined to supplant, systems biology models of metabolic pathways. They are also parallel to physiome models, but do not aim at modeling physiological functions beyond fluid circulation in detail. In fact the above four types of models can reinforce each other when integrated (Bois, 2009, 2010).