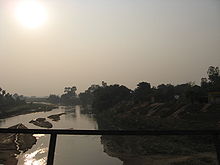 Obra is a small town just 15 km away from the District Headquarter on NH-98 (Garwa-Patna). Obra is also a headquarter of Obra block, under Daudnagar sub-division and a block of 144 villages having population of 220,000 (Census 2001). In Obra block there are 20 panchayats each averaging 6 villages. Block stretched in north, east and south and demarcated by Daudnagar, Rafiganj, Aurangabad blocks and in west it is Rohtas district. Obra is also an assembly seat (Obra and Daudnagar block) in the Bihar Legislative assembly.

Situated on the confluence of Punpun and Adri river, the rolling topography of the town is typical, spread on the plain of the Son river bed known for its very fertile land.

Obra is located in the eastern part of India at 24°52′N 84°20′E﻿ / ﻿24.87°N 84.34°E﻿ / 24.87; 84.34. Town is surrounded by very pleasant rivers Punpun from the western and northern part and By River Adri in surkhi village from eastern side. River Son is flown just 8 km. west from the town. Obra is situated 114 km. from the Capital city of Bihar, Patna. Obra is situated in plain of River son, so the land is very fertile by nature. It is not very far away from Ratan hillock of Magadh range and Chhotanagpur plate of Palamu(Jharkhand). Flow of river from three sides make its a beautiful picturesque to this place. its considered as world most fertile land for rice

Economy of Obra is mainly depend on agriculture. A vast fertile land in the region support most of the Families economically. Obra is also famous as Rice bowl of Magadh region. So the trading of Food grains to all part of Bihar and Jharkhand makes Obra a big mandi(Market) where more than 50 traders are operating their businesses in single Gola Road. Obra is also well known for the production of Kaleen (carpets). The tradition of weaving beautiful and unique carpets in the town dates back to 15th century. Set up near Koriepur village, the Kaleen Udyog is currently managed by the state government. Kambal(blanket) industry in Obra is another industry supported by Government. A processing plant for raw blanket is established here for 50 years and the trade of these kambals is dated back to 100 of years. These sector is also organize hare employeed more than 1000 of people.

surya mandir road -A very spiritual place for the entire region. Nine incarnation of Chhat puja are situated here with temples of Lord.

And some 4 or 5 small schools are here to cater the education.

A widespread playground is here just beside Deenbandhu Residential school on the beautiful edge of PUNPUN river which is main centre for aerobic physical activity. Many young who are aspiring to join army can be seen sweating relentlessly early in the morning.Then starts the game time which includes conventional and especially FOOTBALL match in rainy muddy season.Dedication to win there needs some ignition with financial and motivational support.This is hub as walking area for middle-upper aged seniors. But sad part is that we can rarely see any lady in this ground as many eyes consider it negative.

Particularly in Obra, Health facility are very good in comparative to other blocks in Aurangabad District. Government hospital in Obra is very well managed. It is located near to Bel more on NH-98. The hospital has emergency wards and facility of night treatment is also catered over here. Apart from the government hospital some of very renowned Physicians(Doctors) of the District are serving the local population. Few of These are -

More than 20 medical hall are serving the need of locals here. Some of them are-

Obra town lies on NH-98 and just 14 km from NH-2(Grand Trunk Road), So the connectivity of town with all major cities in state as well as all part of district is very good. Obra lies in between District town Aurangabad and Subdivision town Daudnagar with equi distance of 15 km each on NH so both town are connected by many buses, auto and trekers. Long distance such as Ranchi, Jamshedpur, Bokaro, Dhanbad, Daltonganj and other part of Jharkhand are directly connected with daily buses and for Patna(114 km) more than dozens of buses plying apart from many Tata Sumo and Tata Wingers.

Obra is well connected by Indian Railways through entire nation. Just 4 km from the town New Delhi-Howrah main Grand Chord line passes. Nearby station of Obra town is Anugrah Narayan Road station is just 5 km from the town so there are more 50 train including express and passenger trains passes daily. Near about dozen of trains for National Capital Delhi and the same number of trains are available for Kolkata are commuting daily. A.N.Road Station is just 69 km from Gaya and 135 km from Varanasi. Most of the express trains are halting here except Rajdhani exp. So it is well connected with all part of the state as well nation.

There is no direct connectivity with air services but nearest International airport is Bodhgaya (70 km) and Domestic is Patna (114 km).

There are few lodges over here but not in good condition for staying so it is better to stay in Aurangabad (15 km).