Near-infrared spectroscopy (NIRS) is a spectroscopic method that uses the near-infrared region of the electromagnetic spectrum (from about 800 nm to 2500 nm). Typical applications include pharmaceutical, medical diagnostics (including blood sugar and oximetry), food and agrochemical quality control, and combustion research, as well as cognitive neuroscience research.

Near-infrared spectroscopy is based on molecular overtone and combination vibrations. Such transitions are forbidden by the selection rules of quantum mechanics. As a result, the molar absorptivity in the near IR region is typically quite small. One advantage is that NIR can typically penetrate much farther into a sample than mid infrared radiation. Near-infrared spectroscopy is, therefore, not a particularly sensitive technique, but it can be very useful in probing bulk material with little or no sample preparation.

The molecular overtone and combination bands seen in the near IR are typically very broad, leading to complex spectra; it can be difficult to assign specific features to specific chemical components. Multivariate (multiple variables) calibration techniques (e.g., principal components analysis, partial least squares, or artificial neural networks) are often employed to extract the desired chemical information. Careful development of a set of calibration samples and application of multivariate calibration techniques is essential for near-infrared analytical methods.[1] 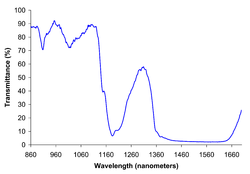 Near infrared spectrum of liquid ethanol.

The discovery of near-infrared energy is ascribed to Herschel in the 19th century, but the first industrial application began in the 1950s. In the first applications, NIRS was used only as an add-on unit to other optical devices that used other wavelengths such as ultraviolet (UV), visible (Vis), or mid-infrared (MIR) spectrometers. In the 1980s, a single unit, stand-alone NIRS system was made available, but the application of NIRS was focused more on chemical analysis. With the introduction of light-fiber optics in the mid-1980s and the monochromator-detector developments in early-1990s, NIRS became a more powerful tool for scientific research.

This optical method can be used in a number of fields of science including physics, physiology, or medicine. It is only in the last few decades that NIRS began to be used as a medical tool for monitoring patients.

Instrumentation for near-IR (NIR) spectroscopy is similar to instruments for the UV-visible and mid-IR ranges. There is a source, a detector, and a dispersive element (such as a prism, or, more commonly, a diffraction grating) to allow the intensity at different wavelengths to be recorded. Fourier transform NIR instruments using an interferometer are also common, especially for wavelengths above ~1000 nm. Depending on the sample, the spectrum can be measured in either reflection or transmission.

The type of detector used depends primarily on the range of wavelengths to be measured. Silicon-based CCDs are suitable for the shorter end of the NIR range, but are not sufficiently sensitive over most of the range (over 1000 nm). InGaAs and PbS devices are more suitable though less sensitive than CCDs. In certain diode array (DA) NIRS instruments, both silicon-based and InGaAs detectors are employed in the same instrument. Such instruments can record both UV-visible and NIR spectra 'simultaneously'.

Instruments intended for chemical imaging in the NIR may use a 2D array detector with a acousto-optic tunable filter. Multiple images may be recorded sequentially at different narrow wavelength bands.[3]

NIR sensor for moisture measurement installed on a belt conveyor

The primary application of NIRS to the human body uses the fact that the transmission and absorption of NIR light in human body tissues contains information about hemoglobin concentration changes. When a specific area of the brain is activated, the localized blood volume in that area changes quickly. Optical imaging can measure the location and activity of specific regions of the brain by continuously monitoring blood hemoglobin levels through the determination of optical absorption coefficients.

Typical applications of NIR spectroscopy include the analysis of foodstuffs, pharmaceuticals, combustion products and a major branch of astronomical spectroscopy.

Near-infrared spectroscopy is used in astronomy for studying the atmospheres of cool stars where molecules can form. The vibrational and rotational signatures of molecules such as titanium oxide, cyanide, and carbon monoxide can be seen in this wavelength range and can give a clue towards the star's spectral type. It is also used for studying molecules in other astronomical contexts, such as in molecular clouds where new stars are formed. The astronomical phenomenon known as reddening means that near-infrared wavelengths are less affected by dust in the interstellar medium, such that regions inaccessible by optical spectroscopy can be studied in the near-infrared. Since dust and gas are strongly associated, these dusty regions are exactly those where infrared spectroscopy is most useful. The near-infrared spectra of very young stars provide important information about their ages and masses, which is important for understanding star formation in general.

Techniques have been developed for NIR spectroscopic imaging. Hyperspectral imaging has been applied for a wide range of uses, including the remote investigation of plants and soils. Data can be collected from instruments on airplanes or satellites to assess ground cover and soil chemistry.

Techniques have been developed for NIR spectroscopy of microscopic sample areas for film thickness measurements, research into the optical characteristics of nanoparticles and optical coatings for the telecommunications industry.

Medical applications of NIRS center on the non-invasive measurement of the amount and oxygen content of hemoglobin, as well as the use of exogenous optical tracers in conjunction with flow kinetics.

NIRS can be used for non-invasive assessment of brain function through the intact skull in human subjects by detecting changes in blood hemoglobin concentrations associated with neural activity, e.g., in branches of Cognitive psychology as a partial replacement for fMRI techniques. NIRS can be used on infants, and NIRS is much more portable than fMRI machines, even wireless instrumentation is available, which enables investigations in freely moving subjects[4][5] . However, NIRS cannot fully replace fMRI because it can only be used to scan cortical tissue, where fMRI can be used to measure activation throughout the brain.

The application in functional mapping of the human cortex is called optical topography (OT), near infrared imaging (NIRI) or functional NIRS (fNIRS). The term optical tomography is used for three-dimensional NIRS. The terms NIRS, NIRI and OT are often used interchangeably, but they have some distinctions. The most important difference between NIRS and OT/NIRI is that OT/NIRI is used mainly to detect changes in optical properties of tissue simultaneously from multiple measurement points and display the results in the form of a map or image over a specific area, whereas NIRS provides quantitative data in absolute terms on up to a few specific points. The latter is also used to investigate other tissues such as, e.g., muscle, breast and tumors.

By employing several wavelengths and time resolved (frequency or time domain) and/or spatially resolved methods blood flow, volume and oxygenation can be quantified.[6] These measurements are a form of oximetry. Applications of oximetry by NIRS methods include the detection of illnesses which affect the blood circulation (e.g., peripheral vascular disease), the detection and assessment of breast tumors, and the optimization of training in sports medicine. These techniques can also be used for industry or agro processes in order to predict particle size/density.

The use of NIRS in conjunction with a bolus injection of indocyanine green (ICG) has been used to measure cerebral blood flow[7] and cerebral metabolic rate of oxygen consumption[8] in neonatal models.

NIRS is starting to be used in pediatric critical care, to help deal with cardiac surgery post-op. Indeed, NIRS is able to measure venous oxygen saturation (SVO2), which is determined by the cardiac output, as well as other parameters (FiO2, hemoglobin, oxygen uptake). Therefore, following the NIRS gives critical care physicians a notion of the cardiac output. NIRS is liked by patients, because it is non-invasive, is painless, and uses non-ionizing radiation.

The instrumental development of NIRS/NIRI/OT has proceeded tremendously during the last years and, in particular, in terms of quantification, imaging and miniaturization.[6]

NIR is often used in particle sizing in a range of different fields, including studying pharmaceutical and agricultural powders.

As opposed to NIRS used in optical topography, general NIRS used in chemical assays does not provide imaging by mapping. For example, a clinical carbon dioxide analyzer requires reference techniques and calibration routines to be able to get accurate CO2 content change. In this case, calibration is performed by adjusting the zero control of the sample being tested after purposefully supplying 0% CO2 or another known amount of CO2 in the sample. Normal compressed gas from distributors contains about 95% O2 and 5% CO2, which can also be used to adjust %CO2 meter reading to be exactly 5% at initial calibration.[citation needed]