Near Infrared Camera and Multi-Object Spectrometer

Near Infrared Camera and Multi-Object Spectrometer 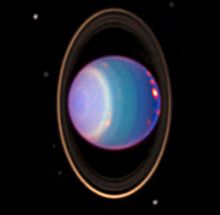 The gas-giant Uranus showing cloud bands, rings, and moons of the Uranian system, taken with NICMOS in 1998. 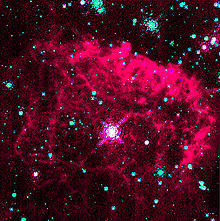 Pistol Star and Pistol Nebula, taken by NICMOS in 1997. 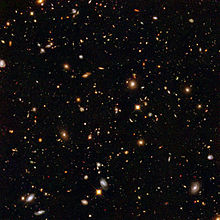 NICMOS's Hubble Ultra Deep Field. The instrument provided near-infrared views of the HUDF, extending the data available for that area.

The Near Infrared Camera and Multi-Object Spectrometer (NICMOS) is a scientific instrument for infrared astronomy, installed on the Hubble Space Telescope (HST), operating from 1997 to 1999, and from 2002 to 2008. Images produced by NICMOS contain data from the near-infrared part of the light spectrum (it can see heat), colors correspond to the longer wavelengths.

NICMOS was conceived and designed by the NICMOS Instrument Definition Team centered at Steward Observatory, University of Arizona, USA. NICMOS is an imager and spectrometer built by Ball Aerospace & Technologies Corp. that allows the HST to observe infrared light, with wavelengths between 0.8 and 2.4 micrometers, providing imaging and slitless spectrophotometric capabilities. NICMOS contains three near-infrared detectors in three optical channels providing high (~ 0.1 arcsecond) resolution, coronagraphic and polarimetric imaging, and slitless spectroscopy in 11, 19, and 52 arcsecond square fields of view. Each optical channel contains a 256×256 pixel photodiode array of Hg0.554Cd0.446Te infrared detectors bonded to a sapphire substrate, read out in four independent 128×128 quadrants.[1]

“HST is a warm telescope. The IR background flux collected by cooled focal plane IR instruments like NICMOS or WFC3 is dominated, at rather short wavelengths, by telescope thermal emission rather than by zodiacal scattering. NICMOS data show that the telescope background exceeds the zodiacal background at wavelengths longer than λ ≈ 1.6μm, the exact value depending on the pointing on the sky and on the position of the Earth on its orbit.”[2]

NICMOS was installed on Hubble during its second servicing mission in 1997 along with the Space Telescope Imaging Spectrograph, replacing two earlier instruments. NICMOS in turn has been largely superseded by the Wide Field Camera 3, which has a much larger field of view (135 by 127 arcsec, or 2.3 by 2.1 arcminutes), and reaches almost as far into the infrared.

When conducting infrared measurements, it is necessary to keep the infrared detectors cooled to avoid having infrared interference from the instrument's own thermal emissions. NICMOS contains a cryogenic dewar, that cooled its detectors to ~ 61 K, and optical filters to ~ 105 K, with a block of solid nitrogen ice. When NICMOS was installed in 1997, the dewar flask contained a 230 pound (104 kg) block of nitrogen ice. Due to a thermal short that arose on March 4, 1997 during the instrument commissioning, the dewar ran out of nitrogen coolant sooner than expected in January, 1999. During Hubble Service Mission 3B in 2002, a cryocooler and external radiator were installed on the Hubble that now cools NICMOS through a cryogenic neon loop. NICMOS was returned to service soon after SM 3B.[3][4]

A new software upload in Sept. 2008 necessitated a brief shutdown of the NICMOS cryocooler. Several attempts to restart the cooler failed. After waiting more than 6 weeks for the instrument to warm up, and theorized ice particles to evaporate from the cooling system, the cooler once again failed to restart. A successful restart at 13:30 EST on 16 December 2008 led to four days of cooler operations followed by another shutdown.[5] On August 1, 2009, the cooler was restarted again.[6] NICMOS was expected to resume operations mid February 2010.[7] On June 18, 2010, it was announced NICMOS will not be available for science during the latest proposal Cycle 18. A decision as to whether NICMOS will be available for science in the future has not been made yet.

In 2009, an old NICMOS image was processed to show a predicted exoplanet around the star HR 8799.[8] The system is thought to be about 130 light-years from Earth.[8]

In 2011, around that same star, four exoplanets were rendered viewable in a NICMOS image taken in 1998, using advanced data processing.[8] The exoplanets were originally discovered with the Keck telescopes and the Gemini North telescope between 2007 and 2010.[8] The image allows the orbits of the exoplanets to analyzed more closely, since they take many decades, even hundreds of Earth years to orbit their host star.[8]