Dollar Academy was founded in 1818, which makes it the oldest co-educational day and boarding school in the world. The open campus occupies a 70-acre (280,000 m2)site in the centre of the thriving town of Dollar in Central Scotland, less than 40 minutes drive from the two main Scottish cities, Glasgow and Edinburgh. The school is located at the foot of the Ochil hills and surrounded by Clackmannanshire countryside.

While it has a reputation as one of the sportiest schools in Britain,[1] Dollar Academy is, according to The Scotsman,[2] Scotland's best-performing school academically. The 2011 SQA exam results saw a 95% pass rate at Higher, 62% of which were at grade A. An impressive 38 students achieved a clean sweep of five or more Highers at grade A. Dollar Academy has also outstanding art and music facilities, with several large scale public performances and exhibitions each year, including a Christmas concert staged at the Usher Hall, Edinburgh.

There are over 1250 students at Dollar Academy, making it the fourth largest independent school in Scotland. All based on a single campus, it is divided into three separate schools: the Prep School (Preps I to V for ages 5–10), the Junior School (Juniors I and II for ages 10–12) and the Senior School (Forms I to VI for ages 12 going on 18).

Around 100 of the students are boarders; the rest are day pupils, either from the village of Dollar itself or from the surrounding counties of Clackmannanshire, Stirlingshire, Perth and Kinross and Fife. Just 20% of the boarding students are from overseas, representing less than 4% of the total school roll. Foreign students come from a range of countries, including France, Spain, Germany, Russia, and China. The remaining 80% of boarding students are UK nationals.

Dollar Academy has a wide range of activities on offer; there are over 70 sports and recreational activities which occupy students after the school day has finished and over the weekend. Dollar Academy has produced international competitors across many disciplines, most notably in Rugby and Shooting, but the emphasis is on taking part, with students continually challenged to try new and unusual activities.

Dollar Academy follows the Scottish education system, with students sitting a mixture of Standard Grades and Intermediates at the end of Form IV and Highers at the end of Form V/VI. Most courses in Form VI are at Advanced Higher level. A number of students study the Scottish Baccalaureate. All standard subjects are on offer at Dollar Academy. The school also teaches Classical Studies, Latin and Greek, ITC training is provided to all students, and music, art and drama is mandatory.

Specialised courses and industry placements are available to senior students who wish to study medicine, law, engineering and business. The teacher:student ratio at Dollar Academy is 9:1 and support is provided across all subjects. In 2011, the national pass rate for Scottish Higher exams was 75.2% ref: SQA. The Dollar Academy pass rate was 95%, with 62% of passes at grade A. The Governors' Bursary of £500 is awarded to those students who attain 5 As at band 1 in their Highers.

The school has a well-known pipe band, which has won the Scottish Schools CCF Pipes and Drums competition every year since 2000.[3].

The school day begins at 8:45 am, when pupils must be in Registration in their Form Tutor Groups to be registered at the beginning of each day. In each year there are around 8 or 9 such classes, each of about 17–20 pupils. On Mondays, Wednesdays and Fridays pupils attend Morning Assembly from 9:00 am to 9:15 am. This consists of an academic parade, a hymn, a bible reading and a prayer, followed by announcements about the forthcoming days. On Tuesdays and Thursdays there is extended registration which lasts until 9:10 am, with classes starting five minutes earlier than usual. 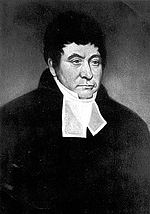 The Revd Dr Andrew Mylne, First Rector of the Academy 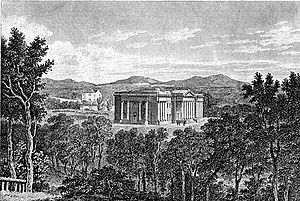 Dollar in the early 19th century

Dollar was founded in 1818 at the bequest of John McNab or McNabb, a merchant who bequeathed part of his fortune - £65,000 - to provide "a charity or school for the poor of the parish of Dollar where I was born".[4]

McNabb died in 1802 but it took another sixteen years before the school opened it doors after much debate about how to use the bequest. It was in 1815 that the Rev. Andrew Mylne, Minister of Dollar, along with fellow Trustees conceived of a great academy to educate the boys and girls of the parish, and also pupils from outside Dollar, who would board with teachers. Full fees would be charged to ‘non-residenters’, while parish pupils would pay fees on a sliding scale, with some receiving free education. To attract pupils from outside the parish, excellent teachers would be appointed.

The original campus was landscaped into several gardens including two ponds. Curiously in the 19th century the school had a strong emphasis on horticulture, and pupils were each allocated plots on the extensive school grounds. Several curious rarities exist in the school grounds in arboricultural terms, including several sequoias. In the 19th century, Dollar pupils sat the Cambridge Examinations or the Indian Civil Service Examinations. It was pioneering in its teaching of science at a time when most private schools followed an exclusively classical education.

McNabb’s coffin was discovered in the early 1930s in a crypt hidden in a disused warehouse in London. Former pupils had his remains cremated, and the ashes of Captain John McNabb now rest above the Bronze Doors of the school founded in his name. 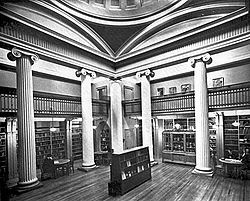 The library before the fire of 1961

The principal school building was designed by renowned Scottish architect William Henry Playfair with its characteristic "bronze doors". The interior of the Playfair building was gutted by a fire in 1961, but Playfair's Greek-style facade remained intact and the school was re-opened in 1966 by former pupil Lord Heyworth and visited by The Queen and Prince Philip. The assembly hall dates from the 1960s rebuild. The school library is a "whispering gallery" because of its domed ceiling.

There are numerous other buildings on the campus, including the Dewar Building for science, the Younger Building for mathematics and business studies, the Gibson Building for music, the Iona Building for home economics and the most recently built Maguire Building for sport, art and drama. There are also several rugby, cricket and football pitches, and new all-weather surface for hockey and tennis. Sport is supported by the Boys' and Girls' pavilions, the Games Hall and the swimming pool. In 2005, the new Maguire Building was opened with excellent facilities for Art, PE and Drama and with the circular Captain’s Room for conferences and meetings. 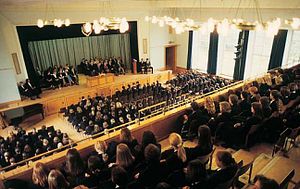 The original boarding accommodation was built at the same time as the original Playfair building. These houses were situated in Academy Place to accommodate teachers and boarders. Over the years these magnificent buildings have have been modernised and study bedrooms introduced. The existing boarding houses are all period buildings, refurbished to high specification. Boarding at Dollar was highly commended by a recent HMIe inspection.

There are spaces for 99 boarders in the Academy's three boarding houses. Both weekly boarders (Monday - Friday) and full boarders are accepted.

Though the majority of pupils do not board, every pupil belongs to a House (girls) or corresponding Quint (boys). Originally there were five boys' houses, instituted in 1911, hence the term "quint". The Quint Cup and House Cup are awarded annually at Prize-Giving. Today there are four houses/quints:

Old Academicals' children are traditionally put into the same house as their Father/Mother/Brother/Sister. The names of Quints and houses were merged in 2009; previously, male quints followed the names: Castle (Atholl), Devon (Mar), Glen (Stewart), and Hill (Argyll). The fifth male quint was McNabb but this was dropped in 1937.

Each year Full Colours and Half Colours are awarded to senior pupils for achievement in sporting or cultural pursuits. These awards merit piping on the school blazer (blue for cultural, white for sporting) and/or a distinctive blazer badge. Sixth-year pupils are also given a distinctive silver tie, and prefects wear white and blue bands round the blazer sleeves.

The Senior Six (or "Top Six") are the most senior prefects in the school, elected by a ballot of Forms IV, V and VI. A number of those with the highest numbers of votes go through to the "College of Cardinals", among whom a Head Boy, Head Girl and two deputies for each are elected.

Two school songs were composed in 1912, but neither was officially adopted. "Here in a Fair Green Valley..." by the poet W. K. Holmes and music by Marc Anthony became the official school song sung at prize-giving each year between 1929-1993. This was then replaced by the Academy Hymn, "O God of Bethel!" until 2007, when the popularity and metaphorical significance of "Will Your Anchor Hold?" (Hymn 412) caused it to be adopted for this purpose. The hymn is known as the "Dollar Anthem" and is often sung at rugby matches.

The Commemoration of the Founder is said by the Head Boy and Head Girl at prize-giving:

"Let us now, in pious duty, remember thankfully all those who by their noble generosity have founded this school, and bestowed upon it great and notable benefactions...

Let us now remember all these benefactors in simple gratitude. We enjoy a great heritage. But privilege carries with it a call to responsibility. What was nobly begun must be nobly continued, in the spirit of the Elizabethan mariners who prayed in the words of Sir Francis Drake:

O Lord, When thou givest to thy servants to endeavour any great matter, grant us also to know that it is not the beginning, but the continuing of the same until it be thoroughly finished, which yieldeth the true glory.

This list is incomplete, and lists speakers from 1949 to the present. The suffix FP denotes a former pupil of the Academy.