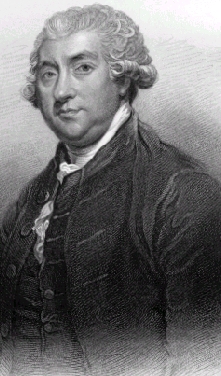 James Boswell, 9th Laird of Auchinleck (, - , ) was a lawyer, diarist, and born in , . He was the eldest son of a judge, Alexander Boswell, 8th Laird of Auchinleck and his wife Euphemia Erskine, Lady Auchinleck. Boswell's mother was a strict , and he felt that his father was cold to him. Boswell, who is best known as ’s biographer, inherited his father’s estate Auchinleck in Ayrshire. His name has passed into the as a term ("Boswell", "Boswellian", "Boswellism") for a constant companion and observer.

Boswell is also known for the detailed and frank journals that he wrote for long periods of his life, which remained undiscovered until the 1920s. These included voluminous notes on the of Europe that he took as a young nobleman and, subsequently, of his tour of Scotland with Johnson. His journals also record meetings and conversations with eminent individuals belonging to The Club, including , , , and . His written works focus chiefly on others, but he was admitted as a good companion and accomplished conversationalist in his own right.

Boswell was born near in on , . As a child, he was delicate and suffered from some type of nervous ailment. He was educated at 's academy, followed by a string of private tutors before being enrolled at 13 into the arts course at the , studying there from 1753 to 1758. Midway in his studies he suffered a serious depression and nervous illness, but when he recovered he had thrown off all signs of delicacy and attained robust health. Boswell had swarthy skin, black hair, and dark eyes; he was of average height, and he tended to plumpness. His appearance was alert and masculine, and he had an ingratiating sense of good humour.

Upon turning nineteen he was sent to continue his studies at the , where he was taught by . While at Glasgow, Boswell decided to convert to Catholicism and become a . Upon learning of this, Boswell's father ordered him home. Instead of obeying, Boswell ran away to London.

Boswell spent three months in London, where he lived the life of a before he was taken back to Scotland by his father. Upon returning, he was re-enrolled at Edinburgh University and was forced by his father to sign away most of his inheritance in return for an allowance of £100 a year. On , , Boswell took his oral law exam, which he passed with some skill. Upon this success, Lord Auchinleck decided to raise his son's allowance to £200 a year and allowed him to return to London. It was during this spell in London that Boswell wrote his "" and met Johnson for the first time, on May 16, 1763; the pair became friends almost immediately. Boswell was eventually nicknamed "Bozzy" by Johnson.

The first conversation between Johnson and Boswell is quoted in "The Life of Samuel Johnson" as follows:: [Boswell:] "Mr. Johnson, I do indeed come from Scotland, but I cannot help it.": [Johnson:] "That, Sir, I find, is what a very great many of your countrymen cannot help." [James Boswell "The Life of Samuel Johnson", [1992] Everyman ed, p247] It is widely believed that Johnson despised the Scots; however, on being specifically asked the question, he also admitted that this prejudice was without basis.

It was around three months after this first encounter with Johnson that Boswell departed for Europe with the initial goal of continuing his law studies at . He spent a year there and although desperately unhappy the first few months, he quite enjoyed his time in Utrecht. He befriended and fell in love with Belle van Zuilen, a Dutch intellect and his superior. Boswell admired the young widow who refused to marry him. After this, Boswell spent most of the next two years travelling around the continent. During this time he met and and made a pilgrimage to . Boswell also travelled to to meet one of his heroes, the independence leader . His well observed diaries of this time have been compiled into two books "Boswell in Holland" and "Boswell and the Grand Tour"

Boswell returned to London in February 1766 accompanied by Rousseau's mistress, with whom he may have had a brief affair on the journey home. After spending a few weeks in the capital, he returned to Scotland to take his final law exam. He passed the exam and became an . He practiced for over a decade, during which time he spent no more than a month every year with Johnson. Nevertheless, he returned to London each year in order to mingle with Johnson and the rest of the London literary crowd, and to escape his mundane existence in Scotland. He found enjoyment in playing the intellectual rhyming game with his peers.

Despite his relative literary success with accounts of his European travels, Boswell was an unsuccessful advocate. By the late 1770s he descended further and further into alcoholism and gambling addiction. Throughout his life, from childhood until death, he was beset by severe swings of mood. His depressions frequently encouraged, and were exacerbated by, his various vices. His happier periods usually saw him relatively vice-free. His character mixed a superficial Enlightenment sensibility for reason and taste with a genuine and somewhat Romantic love of the sublime and a propensity for occasionally puerile whimsy. The latter, along with his tendency for drink and other vices, caused many contemporaries and later observers to regard him as being too lightweight to be an equal in the literary crowd that he wanted to be a part of. However, his humour and innocent good nature won him many lifelong friends.

Boswell was a frequent guest of Lord Monboddo at , a setting where he gathered significant observations for his writings by association with Samuel Johnson, , , Lord Monboddo and other luminaries.

After Johnson's death in 1784, Boswell moved to London to try his luck at the English Bar, which proved even more unsuccessful than his career in Scotland. He also offered to stand for Parliament but failed to get the necessary support, and he spent the final years of his life writing his "". During this time his health began to fail due to and his years of drinking. Boswell died in London in 1795.

When the "" was published in 1791 it at once commanded the admiration that Boswell had sought for so long, and it has suffered no diminution since. Its style was revolutionary - unlike other biographies of that era it directly incorporated conversations that Boswell had noted down at the time for his journals. He also included far more personal and human details than contemporary readers were accustomed to. Instead of writing a respectful and dry record of Johnson's public life, in the style of the time, he painted a vivid portrait of the complete man. It is still often said to be the greatest biography yet written, and the longevity of Dr Johnson's fame perhaps owes much to the work.

The question has often been asked of how a man such as Boswell could have produced so remarkable a work as the "Life of Johnson." Among those who attempted an answer were Macaulay and Carlyle: the former arguing, paradoxically, that Boswell's uninhibited folly and triviality were his greatest qualifications; the latter, with deeper insight, replying that beneath such traits were a mind to discern excellence and a heart to appreciate it, aided by the power of accurate observation and considerable dramatic ability.(Macaulay's venomous condemnation of Boswell's personality may have had a political foundation: Boswell was a Tory, and as such a target for Whig historian Macaulay's attacks. In addition, Macaulay's grandfather was the victim of one of Johnson's sharpest rebukes: "Sir, are you so grossly ignorant of human nature, as not to know that a man may be very sincere in good principles, without having good practice?"). [ [http://www.fullbooks.com/A-Short-Biographical-Dictionary-of-English2.html A Short Biographical Dictionary of English Literature by John W. Cousin - Full Text Free Book (Part 2/13) ] ]

Boswell was present at the meeting of the in May 1787 set up to persuade to lead the abolition movement in Parliament. However, the abolitionist records that by 1788 Boswell "after having supported the cause... became inimical to it."

Boswell's most prominent display of support for the slavery movement was his 1791 poem 'No Abolition of Slavery; or the Universal Empire of Love,' which lampooned Clarkson, Wilberforce and Pitt. The poem also supports the common suggestion of the pro-slavery movement, that the slaves actually enjoyed their lot: "The cheerful gang! - the negroes see / Perform the task of industry."

In the 1920s a great part of Boswell's private papers, including intimate journals for much of his life, were discovered at , north of . These provide a hugely revealing insight into the life and thoughts of the man. They were sold to the American collector and have since passed to , which has published general and scholarly editions of his journals and correspondence. A second cache was discovered soon after and also purchased by Isham. A substantially longer edition of "A Journal of a Tour to the Hebrides" was published in 1936 based on his original manuscript. His "London Journal 1762-63", the first of the Yale journal publications, appeared in 1950. The last, "The Great Biographer, 1789-1795", was published in 1989.

* Purdie, D.W. (2002). [http://www.rcpe.ac.uk/publications/articles/journal_32_3/paper_8.pdf The Maladies of James Boswell, Advocate.] "Journal of the Royal College of Physicians of Edinburgh" 32, 197-202.
* Clarkson, Thomas (1808). "The History of the Rise, Progress, and Accomplishment of the Abolition of the African Slave-Trade by the British Parliament".
* Boswell, James (1791). "No Abolition of Slavery; or the Universal Empire of Love"