National Waterway 4 (NW-4) is a 1,095 kilometres (680 mi) long waterway in India. It has been declared as an Indian National Waterway and is currently under development. It connects the Indian states of Andhra Pradesh, Tamil Nadu, and the Union Territory of Puducherry. The NW-4 runs along the Coromandal Coast through Kakinada, Eluru, Commanur, Buckingham Canals and also through part of Krishna and Godavari rivers in South India. It was declared a National Waterway on 24 November, 2008 under the Provisions of National Waterways Bill, 2006.[1] It is being developed by the Inland Waterways Authority of India (IWAI),[2] and is scheduled for completion in 2013.

Map showing all the National Waterways in India

The proposals were made into law with the passage of the Inland Vessels (Amendment) Bill, 2005 in 2007.[7] In October 2008, another bill - the National waterways Bill, 2006 - was passed in Parliament. It declared the Kakinada-Pondicherry stretch of canals comprising the Kakinada canal, Eluru canal, Commamur canal, Buckingham canal, the Kaluvelly tank, Bhadrachalam- Rajahmundry stretch of rivers Godavari, Wazirabad-Vijayawada stretch of river Krishna in Andhra Pradesh, TamilNadu, and Pondicherry as national waterways.[8] According to this bill, it will take five years and

The National Waterway NW-4 comprises nearly 690 kilometres (430 mi) of canal and 328 kilometres (204 mi) of river sections. In turn, the river section of the NW-4 comprises two major sections - a) " Godavari river section" and b) " Krishna river section" (after the two main rivers of the state of Andhra Pradesh). The Godavari River section stretches from Bhadrachalam to Dowleiswaram, Rajahmundry. The Krishna River section stretches from Wazirabad Nalgonda district to Prakasam Barrage, Vijayawada. The canal section of NW-4 is formed by a combination of the Kakinada canal, the Eluru canal, Commamur canal, and the Buckingham canal. The Kakinada canal runs between Kakinada and Rajahmundry for a length of 50 kilometres (31 mi). Starting from Dowleiswaram on the left bank of the river Godavari through a head sluice and lock to Kakinada (approx. 5 kilometres (3.1 mi) downstream from Kakinada Port). The canal gets its water from the Godavari through the Dowleiswaram barrage and thereafter connects Kakinada anchorage port. It connects the Godavari river section from Bhadrachalam to Rajahmundry. The Eluru canal comprises two distinct irrigation-cum – navigation canals, namely the Krishna Eluru canal of the eastern Krishna delta and the Godavari Eluru canal of western Godavari delta. It runs between Vijayawada to Vijjeswaram lock at Sir Arthur Thomas Cotton Barrage for a total distance of 139 kilometres (86 mi). The Krishna Eluru canal takes off from the river section on the left bank of Krishna river on the upstream of Prakasam barrage through a head sluice at Vijayawada and meets Godavari Eluru canal at east Tammileru lock at Eluru.The Godavari Eluru canal takes off from the River section of river Godavari at Vijjeswaram (16°56′2″N 81°43′27″E﻿ / ﻿16.93389°N 81.72417°E﻿ / 16.93389; 81.72417) in Rajahmundry on the upstream of Dowleiswaram anicut through a head sluice and joins Krishna Eluru canal at East Tammileru lock. The Commamur canal runs between Vijayawada Seethanagaram lock and Peddaganjam lock for a total length of 113 kilometres (70 mi) It takes off from the Krishna River section in river Krishna in Vijayawada on the right side upstream off Prakasam barrage through a head sluice at Seethanagaram and joins the Buckingham canal at Peddaganjam Lock near Ongole. The Buckingham canal is a tidal canal stretching from Peddaganjam lock to Chennai and further down south up to Marakkanam. The stretch of the canal from Peddaganjam lock to Chennai for a length of 316 kilometres (196 mi) is called "North Buckingham canal" and the canal path from Chennai to Marakkanam for a total length of 110 kilometres (68 mi) is called "South Buckingham canal". It was constructed during the 19th century along the Coromandal Coast. Marakkanam is connected to the Sea (Bay of Bengal) at Puducherry by the Kalluvelly tank.

The lengths of the NW-4 in the three states of Andhra Pradesh, Tamil Nadu, and the union-territory of Puducherry are as follows:[10]: 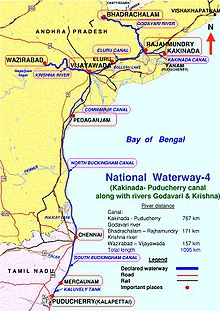 The concept of National Waterways was introduced in 1982 to promote the development of inland water transport in the country. At present, out of six declared National Waterways, developmental works are being carried out on NW-1, 2, and 3 only by Inland Waterways Authority of India (IWAI). The first three National Waterways (NW-1, 2 & 3) are being developed for shipping and navigation by providing basic inland transport infrastructural facilities, including navigational channel with required depth and width, aids for day and night navigation, and terminals at selected locations for berthing and loading/unloading of vessels.

In NW-1 & 2, IWAI undertakes river conservatory works to provide navigational channel of 3 metres (9.8 ft), 2 metres (6.6 ft), and 1.5 metres (4.9 ft) depth in different stretches during the low water period. In NW–3, IWAI is carrying out dredging to provide a navigational depth and width of 2 metres (6.6 ft) and 32 metres (105 ft), respectively. Development works are being carried out with the objective of making all three National waterways fully operational with cargo and other inland vessels by March 2012.

For National Waterways 4 and 5, IWAI initiated the proposals for development in July of 2010.[11] Techno-economic studies for establishment of National Waterways NW-4 was done by Water And Power Consultancy Services (WAPCOS), a subsidiary of Ministry of Water Resources

The completion period for NW-4 was estimated at seven years by Detailed Project Report prepared by WAPCOS, which is contrary to that of 2002 estimates which indicated five tears as completion period. 1707 Hectares of land are required for NW-4 construction; 300 Ha, 1380 Ha, and 27 Ha land has to be acquired in the states of Tamilnadu, Andhra Pradesh, and Puducherry respectively.

A. F. Ferguson was appointed by WAPCOS for conducting traffic studies for proposed waterway in 2005-06.

There is no significant traffic in the waterway except for movement of country boats which carry local produce. The main reason for lack of IWT movement is the absence of other infrastructure facilities and coordinated effort for improvements.

NW-4 has been divided into four major cargo belts, namely Kakinada belt, Krishna belt, South Andhra Pradesh belt, and Chennai belt. Based on the survey conducted by WAPCOS, the 11 million tonnes of cargo is expected to be transported through NW-4 every year. Types of cargo include coal, rice, foodgrains, cement, fertilisers, forest products, salt, and other bulk cargo.[12] The Godavari river system flows through the Bhadrachalam forests and coal deposits. The Krishna River flows through limestone deposits and cement industries at Jaggayyapeta.

The coal is a substantially available commodity in this stretch due to its nearness to Singareni Collieries (SCCL) mines. Coal fields are located in Kothagudem, Manuguru and Yellandu. Rice has a huge traffic potential in this downstream route up to Rajahmundry. In the upstream direction, traffic potential will be gained by transportation of forest products, wood pulp to Bhadrachalam where major paper mills like ITC Bhadrachalam and Andhra Pradesh paper mills (APPML) are located. Apart from this, many small paper mills are located in the East and West Godavari districts.

Main cargo to be transported in downstream direction from kakinada to rajahmundry are coal, fertilizer, salt and rock Phosphate. In the upstream direction, rice bran extractions, cement clinker and fertilizers will be the main cargos for transportation.

Rice and other food grains, rice bran extractions, coal, fertilizer and other general cargo are the substantive commodities which can boost the IWT in this stretch.

The stretch from Vijayawada to Peddaganjam (Ongole) is a vital trade link connecting Kakinada belt with south A.P and Tamil Nadu. The major towns in the vicinity capable of promoting IWT are Vijayawada, Guntur and Ongole. Main traffic in the downward direction are rice and food grains. Forest products will form traffic in the upstream direction.

The canal can form significant traffic because of salt pans located all along the canal stretch. Rice, food grains, fertilizers, chillies, tobacco, fish, granite and vegetables in the downstream direction from Peddaganjam to Chennai. In the upstream direction from Chennai to Peddaganjam, the main traffic consists of fertilizers from Madras Fertilisers (MFL) plant located at Ennore and salt from Chennai.

The canal stretch from Basin bridge up to Marakkanam can constitute significant traffic of salt and marine products because of salt pans and aquaculture shrimp farms all along the route. In the upstream direction from Puducherry via Marakkanam to Chennai, the main traffic consists of salt, fertilizers and timber from Marakkanam, Thiruvallur, Kanchipuram, Villupuram & Puducherry.

The stretch of Buckingham Canal saved thousands of lives in the states of Andhra Pradesh and Tamilnadu along the coromandal coast from December 26 tsunami waves. Dr. B. Ramalingeswara Rao of National Geophysical Research Institute (NGRI), Hyderabad reports that the Buckingham Canal acted as a buffer zone and regulated the tsunami waves on the coastal region over 310 kilometres (190 mi) from Pedda Ganjam to Chennai. The tsunami waves drifted away towards the existing low-lying creeks at several places.[13][14] The canal from Chennai (Marakkanam) to Durga Raya Patnam near Nellore and then to Pedda Ganjam, all along the east coast was filled with tsunami water, which overflowed at a few places and receded back to sea within 10–15 min. This saved the lives of several fishermen, especially in coastal AP and parts of Chennai city.

The cost for developing a waterway in India is approximately INR 0.5 Crore per km, whereas developing a railway or roadway costs around INR 4-6 crore per km.[15] As per estimates drawn by consultants M/s RITES, the project will cost INR 542 crore (as per 2002 prices) and facilitate movement of 100 tonne vessels in the irrigation canal portion and 350 tonne in the rivers and Buckingham canal portion. The developmental works for NW-4 involve the widening of canal, dredging, excavation, bank protection, construction and repair of locks, modification of bridges and roads, navigational aids, and setting up of IWT terminals.

The cost estimated by WAPCOS is around

In the Tenth Five-Year Plan, Planning Commission has increased the budgetary provision for the development of inland water transport infrastructure to INR 636.73 crores, against INR 150.00 crores in the Ninth Five-Year Plan.[16]

For the year 2009-2010, the government has released the following funds through Ministry of Shipping for development of IWT.[17]

Delay in the project

Common factors attributable for delay in development of IWT are lack of infrastructure, absence of fixed scheduled services, poor navigational aids, lack of connectivity, longer river distances, multiple handling, and limited flow of private investments. The Eleventh Five-Year Plan envisaged development of six national inland waterways. Although the government demarcated five such National Waterways, the shipping ministry is unable to start the work on developing two of them (NW-4 & NW-5), as Planning Commission has not approved the development plans until now. Ministry of Shipping awaits the sum of INR 500 Crores that it needs to carry out the development works. As a result of the delay in getting the Planning Commission approval and the funds, the ministry has suspended the plans for developing the sixth national inland waterway.[18]