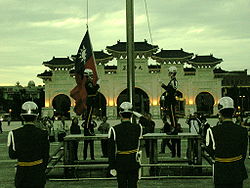 The National Flag Song is played during the raising and lowering of the ROC flag, such as at this daily ceremony in front of the Chiang Kai-shek Memorial Hall (here, the flag is lowered by the honor guards of the ROCN).

In schools located in Taipei, every morning the National Banner Song and the National Anthem are sung before classes at an outdoor ceremony. During this time, the National Flag is raised.[5]