Nāgar Barap (English: /ˈnɑːɡərbərəp/;[citation needed] नागर बरप Nāgar Barap — Nāgar नागर 'urban' and barap बरप writing) is an abugida alphabet of India. It was the predecessor of the Devanagari script It is written from left to right, does not have distinct letter cases, and is recognizable (along with most other North Indic scripts, with the Gujarati script being an exception) by a horizontal line that runs along the top of full letters.

Nāgar Barap is part of the Brahmic family of scripts of India, Nepal, Tibet, and South-East Asia.[3] It is a descendant of the Gupta script, along with Siddham and Sharada.[3] Eastern variants of Gupta called Nāgarī are first attested from the 8th century; from c. 1200 these gradually replaced Siddham, which survived as a vehicle for Tantric Buddhism in East Asia, and Sharada, which remained in parallel use in Kashmir. An early version of Devanagari is visible in the Kutila inscription of Bareilly dated to Vikram Samvat 1049 (i.e. 992 CE), which demonstrates the emergence of the horizontal bar to group letters belonging to a word.[4]

on the top of Shacipura.[5] The script is late Brahmi. 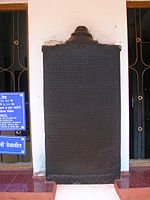 The Konkani language has 16 basic vowels (excluding equal number of long vowels), 36 consonants, 5 semi-vowels, 3 sibilants, 1 aspirate and many diphthongs. Like the other Indo-Aryan languages, it has both long and short vowels and syllables with long vowels may appear to be stressed. Different types of nasal vowels are a special feature of the Konkani language.[9]

One of the most distinguishing features of Konkani phonology is the use of ɵ, the close-mid central vowel, instead of the schwa as used in Hindi and Marathi.

Whereas most Indian languages use only one of the three front vowels, represented by the Devanagari grapheme ए (IPA:e), Konkani uses three: ए -e, ऍ-ɛ and ऎ-æ.

Nasalizations exist for all vowels except for ʌ.

Earlier, Dravidian languages like Indo-Aryan languages, did not make a distinction between the two. The addition of extra signs for /eː/ and /oː/ is attributed to the Italian missionary Constanzo Beschi Vīramāmunivar (1680–1774), who first added it to Tamil. It later passed onto Malayalam, Kannada, Telugu and lastly to the Konkani script. Currently, e, ē, o, ō are transliterated as ऎ, ए, ऒ and ओ respectively.

The IPA symbol for the schwa

The Schwa deletion or Schwa syncope phenomenon plays a crucial role in Konkani and several other Indo-Aryan languages, where schwas implicit in the written scripts of those languages are obligatorily deleted for correct pronunciation.[11][12] Schwa syncope is extremely important in these languages for intelligibility and unaccented speech. It also presents a challenge to non-native speakers and speech synthesis software because the scripts, including Nagar Barap, do not provide indicators of where schwas should be dropped.[13]

This means the schwa ('ə') implicit in each consonant of the script is "obligatorily deleted" at the end of words and in certain other contexts, unlike in Sanskrit. This phenomenon has been termed the "schwa syncope rule" or the "schwa deletion rule" of Konkani. In other words, when a vowel-preceded consonant is followed by a vowel-succeeded consonant, the schwa inherent in the first consonant is deleted.[14] However, this formalization is inexact and incomplete (i.e. sometimes deletes a schwa when it shouldn't or, at other times, fails to delete it when it should), and can yield errors. Schwa deletion is computationally important because it is essential to building text-to-speech software for Konkani.[14] Without the appropriate deletion of schwas, any speech output would sound unnatural.

For instance, the letter sequence ळब is pronounced differently in मळब maḷab sky and मळबार maḷbār in the sky . While native speakers correctly pronounce the sequences differently in different contexts, non-native speakers and voice-synthesis software can make them "sound very unnatural", making it "extremely difficult for the listener" to grasp the intended meaning.

With some words that contain /n/ or /m/ consonants separated from succeeding consonants by schwas, the schwa deletion process has the effect of nasalizing any preceding vowels. Some examples in Konkani include -