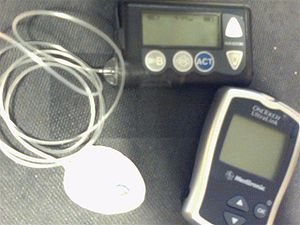 MiniMed Paradigm is a series of insulin pumps manufactured by Medtronic for patients with diabetes mellitus. The pump operates with a single AAA battery and uses a piston-plunger pump to infuse a programmed amount of insulin into the patient through a length of tubing. The Paradigm uses a one-way wireless radio frequency link to receive blood sugar measurements from select glucose meters. The Paradigm RT (Real Time) series adds the ability to receive data from a mated continuous blood-glucose monitor. Although the pump can use these measurements to assist in calculating a dose of insulin, no actual change in insulin delivery occurs without manual user-intervention. [1][2]

In the United States, the device is regulated by a branch of the Food and Drug Administration.[3]

Insulin pumps are drug delivery devices used to treat patients with type 1 and type 2 diabetes. The Minimed Paradigm REAL-Time and Continuous Glucose Monitoring (CGM) system, which received FDA clearance in 2006,[4] uses tubing and a reservoir with rapid-acting insulin. This "infusion set" is patient-connected via a catheter to the abdomen region. The infusion set can remain in the place for 3 days while the pump is clip-belt worn. There is a quick-disconnect feature for the tubing. The pump delivers insulin in two modes. In Basal rate mode, the delivery is continuous in small doses similar to a pancreas, for example 0.15 units per hour throughout the day. Basal rates are set to meet individual metabolic rates. In Bolus mode, the delivery is programmed to be a one-time delivery prior to eating or after an unexpected high, for example 18 units spread out to several hours. This type of continuous treatment is in contrast to traditional multiple daily injections (MDI) that use slower-acting insulin. Continuous treatment reduces glucose variability.[5]

The Paradigm system consists of two basic parts: an insulin pump and an optional glucose sensor CGM worn for up to 3 days. The disposable sensor is subcutaneously-placed to make glucose measurements[6] in interstitial fluid every 5 minutes and transmit the reading via low power radio frequency (ISM band) to the pump for realtime display. However, insulin therapy may be conducted without CGM and although there is not yet an automated insulin-regulation feedback mechanism between measure and infusion to control the amount and timing of insulin, this is clearly a future objective. So any change in basal or bolus is patient-driven by programming the pump using the Bolus WizardTM. The latest model pumps are the MiniMed Paradigm 522 and 722 which differ in reservoir size, 176 versus 300 units, respectively. In 2007 the FDA approved a pediatric model for patients 7 to 17 years old.[7]

The Minimed Paradigm System is composed of the following parts:

The development history of the Minimed pump goes back to the 1980s.[10]

The Food and Drug Administration has at least six classifications for the various parts of the Minimed Paradigm System.

Basis for CSII vs. MDI

Present day treatment has evolved from conventional 2 injections per day, to multiple daily injections (MDI) 4-5 per day, to continuous subcutaneous insulin infusion (CSII) having basal doses of as little as 15 minutes and few bolus doses. The objective of CSII is to reduce the long-term variability of blood glucose by increasing the frequency of infusion. In 1995 the ADA issued the statement, "CSII is an acceptable alternative to multiple injection therapy in the management of Insulin Dependent Diabetes Mellitus".

The Diabetes Control and Complications Trial (DCCT) study showed that CSII patients achieved an A1c of 7.3% (much better than the 9.1% achieved for conventional treatment).[19] This large and controlled study also showed that improvement in glycemic control could reduce the incidence of microvascular complications for type 1 diabetes by 60%.[20] The United Kingdom Prospective Diabetes Study (UKPDS) achieved similar conclusions when it studied glycemic control in patients with Type 2 diabetes. The UKPDS results proved that control of glucose levels to near-normal levels delays the onset and slow the progression of microvascular complications for Type 2 diabetes.

The DCCT study did, however, find that there was an increase occurrence in episodes of hypoglycemia related to CSII as compared to conventional therapy. But at the time there were few studies on the use of combined CSII and blood glucose monitoring. Also, no rapid-acting insulin or pumps were in practice. Wainstein[21] in 2005 reported on the efficacy of insulin therapy with CSII versus MDI in the treatment of 40 poorly controlled obese Type 2 diabetic patients. The results showed treatment with CSII significantly reduced HbAlc levels compared with treatment with MDI.[5]

One other study, the Epidemiology of Diabetes Interventions and Complications (EDIC) study, showed that treatment is durable. It was the first study to show that, in a 17 year span, controlling A1c with CSII can reduce risk of cardiovascular events by 42%.[22] But still little was published related to benefits of clinical use of combined CSII and blood glucose monitoring devices, especially CGM. Up until 2006 there were no clinical trials that reported outcomes comparing the use of insulin pumps in conjunction with glucose monitoring devices.[5] It was not until 2007 that clinical trials began: 1) Study to Compare Efficacy of the MiniMed Paradigm REAL-Time System Vs. MDI in Subjects Naive to Insulin Pump Therapy;[23] 2) Feasibility Study of Effective Methods for Training Pump Naive Subjects To Use The Paradigm System And Evaluate Effectiveness.[24] and 3) Use of Real-Time Continuous Glucose Monitoring System in Patients With Type 1 Diabetes Mellitus.[25]

Using the Minimed Paradigm pump or CGM requires training.[26] There is a self-study provided by the manufacturer composed of the following basic steps:

The Minimed Paradigm pump or CGM should not be operated without training and consultation from a health care provider and manufacturer representative.

The benefits of the Minimed Paradigm and CGM system are many, some highly significant in terms of reducing the probability of dangerous events, including overnight death or coma from extended period of untreated extreme hypoglycemia, while others are a matter of convenience. These include high/low alarms for continuous nighttime monitoring and temporary basal rates. Others include immediate intervention capability to reduce glycemic variability; provides more frequent information that helps to understand cause and effect of life style; a better pancreas simulator compared to MDI; and more flexibility eating.[27][28][29] Furthermore, it has been shown that CGM reduces long-term A1c, provides better control, and without increasing risk of hypoglycemia.[30]

The MiniMed Paradigm 522 and 722 Insulin Pumps have a list price of $6,195 while the optional starter kit for the CGM components list for US $999.[31] Insurance coverage for the CGM system is possible under pharmacy benefits (vs. durable medical benefits which have typically a 20% co-pay). Approximately 30% of American patients with typical "commercial" coverage can process their CGM under pharmacy, while 90% of American patients are actually eligible for coverage if they meet plan requirements. The estimated out-of-pocket cost is US $0.86 per day for pharmacy benefit or US $2.33 per day for durable medical benefit.[32]

It was 1996 when three Russian biomedical engineers (Bobylev, Gromova, Toloknov) wrote, "To date, the feedback principle of insulin therapy is not fully implemented because the number of monitored physiological parameters is insufficient ... In the early 1960's, Kadish used a system consisting of a glucose sensor, a processor, and a pump to control glycemia in patients with diabetes." Later, this system was developed by Albisser.[34] Today, nearly 50 years after Dr. Arnold Kadish's system, and after advancements as measured by Nobel prizes awarded in medicine, chemistry, and physics,[35] and after more than 23 million people in the United States alone were diagnosed with diabetes in 2007, the industry continues to have the same basic description of a pump system in the marketplace, "a glucose sensor, a processor, and a pump" instead of "sensors, processors, and pumps".

The ultimate long-term goal of future technology for a portable device for treating diabetes is to: a) eliminate all dependent peripheral devices, for example, calibration meter, injection syringes/pens, glucagon, etc.; b) manage very complex life situations with fully automated protocols, for example, respond to DKA, sickness, extreme exercise/eating; and c) single on-off button control. This is absolutely not an impossible goal.

There are vast more complex and faster-responding systems that have sought solutions for control and whereby the engineering and mathematics of dynamical systems have provided such solutions. For starter, in control theory a true closed-loop feedback pump will have to infuse not just rapid-acting insulin for positive errors, but also infuse glucagon for negative errors. For managing complex life situations, the pump will need several MEMS-based sensors to monitor more than just glucose, for example heart rate, breathing, ECG, temperature, CO2, blood pH, dissolved O2, etc.

Currently, Medtronic has the following research and development projects in its pipeline: Next Generation REAL-Time Continuous Glucose Monitoring System; Next Generation Insulin Pump; Pre-filled Insulin Reservoirs; Implantable Insulin Pump; and Artificial pancreas (Semi-Automated System & Closed-Loop System).[36] The industry trend in portable devices has piggybacked on the success of wireless technology[37] but not on the success of other disciplines, such as dynamical system, Cybernetics and adaptive systems, for root-cause solutions to close the "true" loop.[38] While the slow-responding dynamics in the physiology of glucose regulation is not beyond the mathematics of PID controllers, 50 years of patient-perspective "advancement" says it is beyond the corporate, congressional, and lobbying leaders. Also, the accuracy of existing continuous glucose monitoring systems poses a problem for an artificial pancreas.