He was the youngest son of King Stefan Uroš I and his wife, Queen Helena (Hélène d'Anjou) from The House of Anjou. Unexpectedly he became king of Serbia after the abdication of his brother Stefan Dragutin. He was around 29. Immediately upon his accession to the throne he attacked Byzantine lands in Macedonia. In 1282, he conquered the northern parts of Macedonia with the city of Skoplje, which became his capital. Byzantine Emperor Michael VIII Palaiologos began preparations for war but he died before their completion. The next year Milutin advanced with his brother deep into Byzantine territory all the way to Kavala. In 1284, Milutin also gained control of northern Albania and the city of Dyrrachion (Durrës). For the next 15 years there were no changes in the war. Peace was concluded in 1299 when Milutin kept the conquered lands as the dowry of Simonis, daughter of Emperor Andronikos II Palaiologos who became his 4th wife.

War with the Tatars

Victory of king Milutin over Tatars

After 1280 a Bulgarian prince named Shishman came to rule the semi-independent principality of Vidin. Shishman was a vassal of Nogai Khan, Khan of the Golden Horde and sought to expand his territories to the west, invading Serbia coming as far as Hvosno, the Tatars failed to capture Zdrelo (near Peć) and were pursued back to Vidin by the Serbs. Milutin devastated Vidin and the rest of Shishman's dominion, making Shishman take refuge on the other side of the Danube. The two however became allies after Milutin married Serbian župan Dragoš to the daughter of Shishman, later Milutin would give his daughter Anna to Shishman's son Michael who would become the Tsar of Bulgaria in 1323. Milutin and Nogai Khan would soon come in conflict because of the loss of Vidin, Nogai launched a campaign against Serbia but Milutin offered peace after sending his son Stefan Dečanski to Nogai's court, Stefan stayed with his entourage there until 1296 or Nogai Khan's death in 1299.[1]

Feud of the brothers

Disputes began between Milutin and his brother Stefan Dragutin after a peace treaty with the Byzantine Empire was signed in 1299. Dragutin in the meantime held lands from Braničevo in the east to the Bosna river in the west. His capital was Belgrade. War broke out between the brothers and lasted, with sporadic cease-fires, until Dragutin's death in 1314. During this war Milutin appointed Stefan Dečanski as regent in Zeta, modern Montenegro. This meant that Stefan Dečanski was to be heir to the throne in Serbia and not Dragutin's son Stefan Vladislav II. 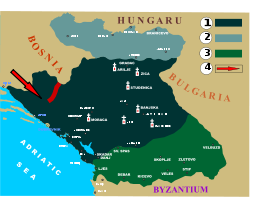 Kingdom of Serbia, at the end of the XIII century and early fourteenth: 1 Stefan Uros II Milutin territory; 2 Stefan Dragutin's state; 3 Milutin's acquisitions up to 1299; 4 Temporary loss of land in the Hum, at the beginning of the fourteenth century.

He captured Durres in 1296.[2] The Battle of Gallipoli (1312) was fought by the Serbian troops sent by Stefan Uroš II Milutin to aid the Byzantine Emperor Andronikos in the defense of his lands against the Ottoman Turks. After numerous attempts in subduing the Turks, the rapidly crumbling Byzantine Empire was forced to enlist the help of Serbia. The Turks were looting and pillaging the countryside and the two armies converged at the Gallipoli peninsula where the Ottomans were decisively defeated. Out of the gratitude to Serbia, the town of Kucovo was donated to the Serbs.

Upon Stefan Dragutin's death in 1314 Milutin conquered most of his lands including Belgrade. But in 1319 Charles I of Hungary regained control over Belgrade and banovina Mačva while Milutin held control in Braničevo. In the year 1314 Milutin's son Stefan Dečanski rebelled against his father, but was captured, blinded and sent to exile in Constantinople. For the rest of Milutin's reign his youngest son Stefan Constantine was considered as heir to the throne, but in the spring of 1321 Stefan Dečanski returned to Serbia and was pardoned by his father.

At the end of Milutin's life many things changed in Serbia. Serbia was one of the strongest countries in south-eastern Europe, except for Hungary. During his reign many court ceremonials were taken over from the Byzantine court and Byzantine culture overflowed into Serbia. Milutin was also well known as the founder of many monasteries: Gračanica monastery, Our Lady of Ljeviš, the church of Vavedenje in Hilandar and many more. After his death a short civil war followed, after which the Serbian throne was ascended by his eldest son, Stefan Dečanski.

By his first wife, Helena, daughter of sebastokratōr John I Doukas of Byzantine ruler of Thessaly and Hypomone, he had no children.

By his second wife, Elizabeth, daughter of King Stephen V of Hungary and Elizabeth the Cuman, Milutin had:

By his third wife, Anna, the daughter of George I of Bulgaria, Stefan Uroš II Milutin had the following children:

By his fourth wife Simonis, the daughter of Emperor Andronikos II Palaiologos, he had no children.