The Milton Torres 1957 UFO Encounter is a case reported by a former jet pilot in the United States Air Force, Milton John Torres, of Miami, Florida. On May 20, 1957, the 25-year-old Torres was ordered on a mission to intercept and shoot down a large UFO that had been picked up by radar in the skies over East Anglia, United Kingdom. Torres, flying a North American Aviation F-86D Sabre jet approached the object and prepared to fire upon it. As he locked on his weapons, the UFO suddenly zoomed away at a high rate of speed. The details of this case were first made public in a release of UFO-related case files by the British government in October 2008.[1] 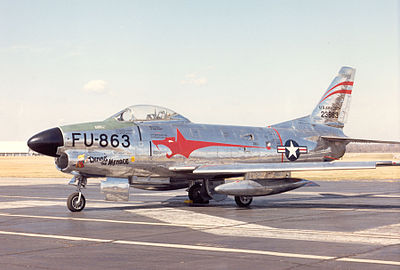 F-86D Sabre fighter jet similar to that flown by Milton Torres in 1957.

This case shares some similarities with the Del Rio, Texas UFO Crash of 1955, which also involved an aerial encounter between an F-86 Sabre and a UFO.

Events Prior to Sighting 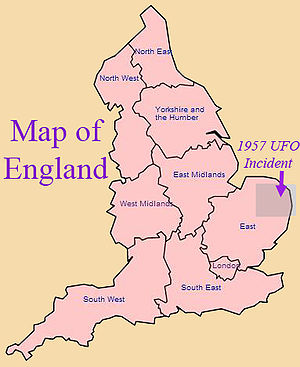 On May 20, 1957, Milton Torres was a 25-year-old lieutenant with the 514th Fighter Interceptor Squadron in the 406th Air Expeditionary Wing based at RAF Manston in Kent. Torres was the pilot of one of two North American Aviation F-86D jets that were on five-minute alert at the end of the runway at RAF Manston airfield, awaiting the signal to scramble. The two American pilots were on standby and their jets were fully powered for immediate take-off. The exact time of the incident is not known, but it occurred late in the evening on May 20.[2]

Torres and his fellow pilot were in the "alert shack" at RAF Manston when they received instructions to take to the air. The two pilots raced to their respective F-86Ds and took off well within the allotted five minutes.

"The initial briefing indicated that the ground was observing for a considerable time a blip that was orbiting the East Anglia area." Torres was then told that the object of his pursuit "was an unidentified flying object with very unusual flight patterns" and that "the bogey [UFO] actually was motionless for long intervals."[2]

Having difficulty believing that he had been ordered to open fire on the unknown object, Torres requested authentication. "I was only a lieutenant and very much aware of the gravity of the situation." When the authentication code response came back, Torres struggled to match the numbers with those in his daily code sheet. "It was totally black, and the lights were down for night flying. I used my flashlight, still trying to fly and watch my radar." The authentication code matched.[2]

Torres, who was in the lead position, received orders to push his jet to maximum power by using full afterburner and to proceed to an altitude of 32,000 feet on a heading that would intercept the UFO. The F-86D moved to Mach .92, (more than 700 miles per hour).[2] The maximum speed of the F-86D is 761 miles per hour.[3]

Torres and his wingman were vectored by Met Sector to a position over the North Sea, just east of East Anglia. Asked to report any visual observations about the UFO, Torres told ground control, "I'm in the soup, and it is impossible to see anything." High altostratus clouds and night flying conditions prevented him from making any visual contact.[2]

Below is an external link to a Wikimapia map of the approximate location where Milton Torres approached the UFO:

Aware that he was reaching the upper limit of his jet's capabilities, Torres requested to come out of afterburner, but ground control denied his request. At that time, he prepared to execute the order to "fire a full salvo of rockets at the UFO."[2] The F-86D carried 24 rockets. The National Museum of the U.S. Air Force describes the aircraft as having a "retractable tray of 24 rockets" and adds that "the effect of these weapons would have been devastating to an enemy bomber" because each 2.75-inch Mighty Mouse Mk 4/Mk 40 Folding-Fin Aerial Rocket (FFAR) contained the power of a 75mm artillery shell.[3]

As Torres prepared all 24 of his rockets for firing, he could hear the other F-86D pilot also responding to orders from ground control. "I wasn't paying too much attention ... but I clearly remember him giving a 'Roger' to all the transmissions. I can only suppose he was as busy as I was."[2]

Torres was given a final turning maneuver to execute and was told to look 30 degrees to port. His radar screen displayed the UFO at 30 degrees and about 15 miles distant. "The blip was burning a hole in the radar with its incredible intensity. It was similar to a blip I had received from B-52s and seemed to be a magnet of light."[2]

According to Torres, the radar return "had the proportions of a flying aircraft carrier." He added, "By that I mean the return on the radar was so strong that it could not be overlooked by the fire control system on the F-86D... The larger the airplane the easier the lock on. This blip almost locked itself... it was the best target I could ever remember locking on to. I had locked on in just a few seconds, and I locked on exactly 15 miles, which was the maximum range for lock on."[2] 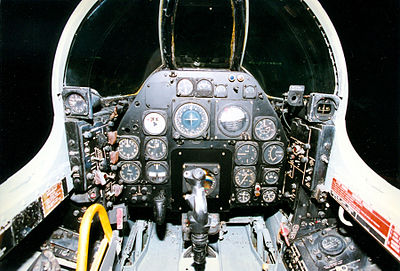 Suddenly, he noticed that the object on the radar screen was moving. "Do you have a Tally Ho?" Ground control radioed, wanting to know if he had made visual contact with the UFO. Torres replied that he was still "in the soup" and could see nothing.[2]

"By this time, the UFO had broke lock, and I saw him leaving my 30 mile range. Again I reported that he was gone, only to be told that he was now off their scope as well. With the loss of the blip off their scope, the mission was over. We were vectored back to home plate (Manston) and secured our switches. My last instructions were that they would contact me on the ground by land line."[2]

Torres was left with the impression that the UFO was moving at no less than Mach 10 (over 7,000 miles per hour) when it disappeared.[2] "This thing had to be going double-digit mach making turns that I didn't think were possible, breaking all the rules of physics," Torres said.[4] According to Torres, the UFO "didn’t follow classic Newtonian mechanics. It made a right turn almost on a dime. The (Royal Air Force radar) scope had a range of 250 miles. And after two sweeps, which took two seconds, it was gone. And I was flying almost at Mach 1, at .92."[5]

After the mission, Torres was advised that the mission he had just completed was classified and that he would receive further information about it from an "investigator." Torres later wrote, "I had not the foggiest idea what had actually occurred, nor would anyone explain anything to me."[2]

On the day after the incident, Torres was ushered into a room of the squadron operations area, where a well-dressed American civilian in a dark blue trenchcoat was waiting for him. The civilian, who looked to Torres like an "IBM salesman" and was in his late 30s or early 40s, had come from London to interview Torres. He waved a National Security Agency (NSA) ID at Torres and immediately began asking questions about the UFO sighting. "He advised me that this would be considered highly classified and that I should not discuss it with anybody, not even my commander. He threatened me with a national security breach if I breathed a word about it to anyone. He disappeared without so much as a goodbye, and that was that, as far as I was concerned." The interview took only about 30 minutes, but Torres was "significantly impressed" by it that he did not speak to anyone about the UFO incident until recent years.[2]

Torres told the Air Force Times that the NSA agent threatened to revoke his flying privileges and end his Air Force career if he talked about the mission. "He told me I would lose my pilot's license and it would be the end of my flying days...."[4]

Since Torres never saw the UFO with his own eyes, some have suggested that what he and the ground radar observers saw was only a radar anomaly. According to inquiries by the British Ministry of Defence (MoD) in 1988, a possible explanation for the blip on Torres' radar screen is that "an experiment in 'electronic warfare' was taking place by means of a bogus radar pulse being transmitted to create an illusion on the Pilot's radar of a solid moving target and that at the last minute before the Pilot was due to release his salvo of rockets the target was very swiftly removed off his radar screen by some technical means creating the further illusion that the target had outrun the Pilot."[2]

According to the online edition of the British newspaper The Times, the experiment may have been part of a secret Central Intelligence Agency (CIA) program codenamed Palladium. The program used advanced electronic equipment to create simulated radar blips close to Soviet airspace.[6] However, recently released CIA documents show that the Palladium program did not actually begin until the early 1960s.[7]

The MoD began releasing declassified UFO-related files in 2005 as requests were made under Britain's Freedom of Information Act (FOIA). According to the British National Archives Web site, "In 2008 MoD announced their intention to transfer all their remaining records on UFOs to The National Archives before 2010. This transfer has now begun with 27 UFO files dating from 1979 to 1991 opened to the public via The National Archives UFO website during 2008." [8]

Documents released in October 2008 included a 1988 letter from Torres to the MoD relating his UFO experience and expressing his desire to know more about what really happened on that day.[2]

Milton Torres was born on July 28, 1931 in New York City but moved to Miami, Florida at age 15. He joined the U.S. Air Force in 1951 and was commissioned as a lieutenant in 1954, serving in Great Britain as a fighter pilot. In 1961, he earned a bachelor of science degree in engineering and became a range control officer at Cape Canaveral AFS for the Gemini and Apollo space programs. Later, he flew 276 combat missions in the Vietnam War and earned 13 air medals, including the Distinguished Flying Cross. He attained the rank of major before retiring from military service in 1971. After leaving the military, he earned a doctorate degree in mechanical engineering and became an engineering professor at Florida International University. He retired from the university in 2004. Torres wrote a novel in 2005 titled The Good Guys Wear Blue Hats [ISBN 978-1420846522] based partly on his own experiences in the military and working with NASA.[9]

In an interview with the Miami Herald published October 23, 2008, the 77-year-old Torres stated that the UFO he saw on radar in 1957 "was not made of this Earth" and that his mission to fire upon the UFO was "just a dumb little kid going to slaughter." He expressed gratitude at not having fired because he surely "would have been vaporized."[10] Speaking to Miles O'Brien of Cable News Network (CNN), Torres said he is convinced the UFO he encountered was designed by an "alien" intelligence and was not manufactured on Earth.[11] He also said,"It was some kind of space alien craft. It was so fast, it was so incredible ... it was absolutely death defying."[12] "To this day, when he [Torres] goes outside, he always looks up, half expecting to catch a glimpse of the prey that escaped him that night," according to an article in the Toronto Star.[13]