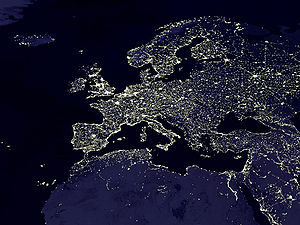 Satellite picture of Europe by night. Light pollution from the major metropolitan areas and cities is clearly visible.

Figures in the first column come from the ESPON project, "Study on Urban Functions", which defines cities according to the concept of a functional urban area (core urban area defined morphologically on the basis of population density, plus the surrounding labour pool defined on the basis of commuting).

Figures in the fourth column come from the OECD Territorial Reviews and correspond to "metropolitan regions". Figures in the last column come from the citypopulation.de website and correspond to urban agglomerations. Further information on how the areas are defined can be found in the source documents. These figures should be seen as an interpretation, not as conclusive fact.

Within the European Union