Quotations from Chairman Mao Tse-Tung (simplified Chinese: 毛主席语录; traditional Chinese: 毛主席語錄; pinyin: Máo zhǔxí yǔlù), is a book of selected statements from speeches and writings by Mao Zedong, the former leader of Chinese Communist Party, published from 1964 to about 1976 and widely distributed during the Cultural Revolution. The most popular versions were printed in small sizes that could be easily carried and were bound in bright red covers, becoming commonly known in the West as The Little Red Book. It is among the books with the largest number printed in history.[1]

Quotations from Chairman Mao Tse-Tung was originally compiled by an office of the PLA Daily (People's Liberation Army Daily) as an inspirational political and military document. The initial publication covered 23 topics with 200 selected quotations by the Chairman of the Chinese Communist Party, and was entitled 200 Quotations from Chairman Mao. It was first given to delegates of a conference on 5 January 1964 who were asked to comment on it. In response to the views of the deputies and compilers of the book, the work was expanded to address 25 topics with 267 quotations, and the title was changed simply to Quotations from Chairman Mao Tse-Tung. On 10 January, the work was re-issued to the delegates and sent to select units of the People's Liberation Army who received their advance copies for educating troops as well as for their comments. In May 1964, the PLA General Political Department (Chinese: 总政治部) , the chief political organ under Central Military Commission , revised Quotations, adding a half title page with the slogan "Workers of the world, unite!" ( 全世界无产者，联合起来！) in bold red letters, and endorsement leaves written by Lin Biao, Mao’s chosen successor, that included three lines from the diary of revolutionary hero Lei Feng. This version was issued "for internal use" to the military leaders. Following discussions that expanded the book twice more — finally closing on 33 topics and 427 quotations by Mao — the commission began publishing the definitive version in May 1965.[2]

By this time, the Chinese Red Army and the entire nation were clamouring to read Mao's words. The initial demand for Quotations from Chairman Mao Tse-Tung was enormous. At the end of 1965, the Central Committee of the Communist Party of China officially approved the book for publication by the People's Publishing House and for distribution within China by the Xinhua Bookstore.

The Ministry of Culture held special study meetings to develop a production and distribution plan. It sought assurances that the book would receive publishing priority and that there would be sufficient paper, ink, and printing presses available. The goal was for "ninety-nine percent (of the population of China to) read Chairman Mao's book", according to a catalogue of publication records of the People's Publishing House.[2] Provinces, municipalities, and autonomous regions across China were ordered to build hundreds of new printing houses to publish the Quotations during the second half of 1966 which pushed the limits of the Chinese printing industry.

As the Cultural Revolution and the personality cult of Mao Zedong was approaching its apogee in February 1967, only two others works were officially authorized for wide publication and distribution: Vladimir Lenin's, The Three Sources and Three Component Parts of Marxism, and Friedrich Engels' Socialism: Utopian and Scientific. During the subsequent three years, no other major works on Marxism-Leninism were printed in China.[2] This disrupted plans for publishing any new volumes of The Complete Works of Marx and Engels that was already in progress. It also halted distribution of other ideological works. As late as 1970, more than 8 million copies of the 4-volume set of Selected Works of Marx and Engels that had already been printed (both in cloth hardcover and paperback) remained undistributed in storage warehouses on the grounds that other works “should not interfere with learning Quotations from Chairman Mao Tse-Tung”.

On the other hand, several other works by Mao had very large printings during the same period, even though these editions were not produced in the astronomical numbers of Quotations from Chairman Mao. These include Selected Works of Mao Zedong (in four volumes, 2.875 million copies in 14 languages), Selected Articles of Mao Zedong (various editions totalling 252 million copies), single article books, and works of poetry.[3]

A quote from the preface of "The Little Red Book" by Lin Biao (with his name scratched out) on the Huayang Palace in Jinan; photo 2007

In 1966, the Propaganda Department of the Communist Party of China approved Quotations from Chairman Mao for export. To meet overseas requirements, the editors of the Chinese Foreign Language Press made revisions necessitated by the situation. They added a "second edition preface" endorsement by Lin Biao, dated 16 December 1966 (which was torn-out following Lin Biao's death and public disgrace in September 1971). To the last page, they listed the names of the publisher (PLA General Political Department) without an ISBN, the printer and distributor (both Xinhua Bookstore), and the publication year.

By May 1967, bookstores in 117 countries and territories around the world – including Great Britain, France, Spain, Japan, Russia, Germany, Italy, Nepal, Indonesia, Burma, Iran, Arab and African nations and others – were distributing Mao's Quotations. Foreign presses operating in 20 countries contributed to the publication of 20 translations in 35 versions.[2]

According to official statistics from departments associated with the PLA General Political Department, from 1964 to 1976, Quotations from Chairman Mao Tse-Tung was published in 4 Chinese editions, 8 Chinese minority languages in 8 versions, one Braille edition, 37 foreign language version and a bilingual Chinese-English version (total 38 foreign versions), with a total printing of 1,055,498,000 copies.[2] The Foreign Languages Publishing and Distribution Administration, according to reports from October 1967, published translations in 65 languages in 853 formats for worldwide distribution.[2]

Some researchers claim that as many as 5 to 6.5 billion copies of Quotations were printed,[4] however, these claims appear to be dubious and are not corroborated by governmental Chinese reports.

The book's phenomenal popularity may be because it was essentially an unofficial requirement for every Chinese citizen to own, to read, and to carry it at all times during the latter half of Mao's rule, especially during the Cultural Revolution.[5]

During the Cultural Revolution, studying the book was not only required in schools but was also a standard practice in the workplace as well. All units, in the industrial, commercial, agricultural, civil service, and military sectors, organized group sessions for the entire workforce to study the book during working hours. Quotes from Mao were either bold-faced or highlighted in red, and almost all writing, including scientific essays, had to quote Mao.

The most widely produced editions of the Quotations of Chairman Mao were published with a printed red vinyl cover wrapper over cardboard with pages bound in 64 folios that included colour photos of Mao. (Other editions of the book were covered in cloth, silk, leather, paper, and other materials.) Most editions were produced in a functional, compact size that fit into a pocket, were easy to carry, and could be taken out at any time "for practice, learning, application." It was published in 32 other common sizes, allegedly the largest format printed on only 4 pages as large as the newspaper Reference News, and the smallest format the size of a matchbox.[2] 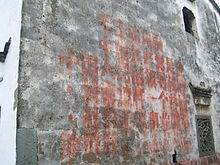 Despite being painted during the Cultural Revolution, faint words from Chairman Mao's Little Red Book still appear on walls in some Chinese villages decades later without protection from time or weather; photo 2005

Today, the book is a symbol of Mao Zedong Thought. Admirers of Mao Zedong can frequently be found holding “The Little Red Book” gripped with their right hand waving it over their heads to show joy, or cries of condemnation. The tradition of the ritual chanting of slogans originated with Lin Biao who Mao Zedong met in the Red Guard. Among the best known is: "Long live the proletariat, holding the Quotations (from Chairman Mao) in their hands!" ( 万岁不离口，语录不离手！) which became a cliché of dogmatism or formalist irony.[2]

In certain situations, the Quotations is given as a gift, for example, when public funds are used to buy gifts, or when personal events arise, such as congratulating newlyweds, and so on. It is said that for some people, keeping the Quotations at home is a psychological burden, because they cannot dispose of it, and if it is inadvertently stained or soiled, it likely will cause considerable offense.[2]

During the 1960s, the book was the single most visible icon in mainland China, even more visible than the image of the Chairman himself. In posters and pictures created by CPC's propaganda artists, nearly every painted character whether smiling or looking determined, was always seen with a copy of the book in his or her hand. After the end of the Cultural Revolution in 1976 and the rise of Deng Xiaoping in 1978, the importance of the book waned considerably, and the glorification of Mao's quotations was considered to be left deviationism and a cult of personality.

Today, Quotations from Chairman Mao Tse-Tung is mostly a piece of nostalgia. Various editions are popular with some collectors, and rare and unusual printings command extremely high prices.[6] It may be purchased at shops in Beijing, Shanghai, other major cities, as well as at some tourist attractions.

Images from "The Little Red Book"

Quotations from Chairman Mao Tse-Tung comprises 427 quotations, divided thematically into 33 chapters. It is also called "Thoughts of Chairman Mao" by many Chinese people. The quotations range in length from a sentence to a few short paragraphs, and borrow heavily from a group of about two dozen documents in the four volumes of Mao's Selected Works. In the book's latter half, a strong empiricist tendency evidences itself in Mao's thought. Usually the quotations are arranged logically, to deal with one to three themes in the development of a chapter. The table below summarizes the book. Please note that the summaries represent what Mao is claiming or writing in each chapter.