The Manhattan Institute for Policy Research (renamed in 1981 from the International Center for Economic Policy Studies) is a conservative,[1][2] market-oriented[3] think tank established in New York City in 1978 by Antony Fisher and William J. Casey, with its headquarters at 52 Vanderbilt Avenue in Midtown Manhattan.[4] The organization describes its mission as to "develop and disseminate new ideas that foster greater economic choice and individual responsibility". The Institute, known for its advocacy of free market-based solutions to policy problems, supports and publicizes research on the economy, energy, education, health care, welfare reform, the legal system, crime reduction, and urban life[clarification needed], among others. Its message is communicated through books, articles, interviews, speeches, op-eds, and through the institute's quarterly publication City Journal, targeted at policymakers, politicians, scholars, and journalists. 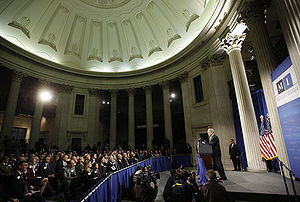 George W. Bush addressing a Manhattan Institute-sponsored event at Federal Hall on November 13, 2008, speaking against too much government involvement in resolving the Global financial crisis of 2008.

Center for the American University

Directed by senior fellows John Leo, James Piereson and John McWhorter, the Center for the American University hosts forums and conferences with influential voices in higher education reform like Mark Bauerlein, Victor Davis Hanson, and Anthony Kronan,[5] and manages the web site Minding the Campus, in addition to producing regularly published articles and op-eds.[6][7] It also oversees the administration of the VERITAS Fund for Higher Education Reform,[8] the goal of which "is to restore what conservative and other critics see as leading casualties of the campus culture wars of the 1980s and '90s: the teaching of Western culture and a triumphal interpretation of American history"[9] and serve to "work against the thrust of programs and courses in gender, race and class studies, and postmodernism in general".[9]

Center for State and Local Leadership

The Center for Civic Innovation's regularly publishes research reports and bulletins on the topics of prisoner re-entry, pension reform, public housing, infrastructure, school choice, and policing, and manages an online database of urban policy resources, Cities on a Hill, launched in November 2009.[10]

The Center for Legal Policy, directed by senior fellow James Copland,[17] is known for its position that "America's litigation system reduces innovation and investment, lowers safety and well-being, and erodes the risk-taking and personal responsibility essential to our free society.".[18] It regularly publishes reports and books on the subject and sponsors the web sites Point of Law and Trial Lawyers Inc..

Institute scholar Peter W. Huber and former scholar Walter Olson were two of the first public policy experts to advocate for tort and litigation reform.[citation needed] Huber's books Liability: The Legal Revolution and its Consequences (1988) and Galileo's Revenge: Junk Science in the Courtroom (1991) and Olson's book The Litigation Explosion: What Happened When America Unleashed the Lawsuit (1991) are credited by many[who?] with framing the initial political debate over frivolous litigation, and raising the profile of this previously obscure political issue in the early 1990s.[19][20]

In November 2009, Encounter Books published Gratzer's broadside "Why Obama’s Government Takeover of Health Care Will Be a Disaster", which examines the current system and presents free-market strategies to reform it "without ruining the patient / doctor relationship, stifling scientific advances, and further devastating our economy".[25][26]

In May 2009, Douglas Holtz-Eakin, former director of the Congressional Budget Office, wrote a report for the Manhattan Institute on bipartisan health care reform based on conservative principles entitled Forging a New Plan For Health Care: Principles and Priorities for Sustainable Reform.

Established in January 2005 under the directorship of senior fellow Edmund J. McMahon, the Empire Center for New York State Policy is "dedicated to promoting freedom, opportunity, and enterprise in the Empire State"[28] through research reports, conferences, and commentary aimed at policymakers, media, and the public. It is located at 119 Washington Avenue in Albany, New York. On January 4, 2010, the center released a report entitled "Blueprint for a Better Budget: A Plan of Action for New York State" proposing budget solutions that the authors claim would save the state $30 billion over three years.[29][30]

The Manhattan Institute is perhaps best known for its influence on law enforcement methods. In particular, the Institute is widely credited with pioneering community policing methods and more specifically quality-of-life policing, also known as "broken windows theory" after the landmark 1982 Atlantic Monthly article "Broken Windows" by James Q. Wilson and George L. Kelling. Kelling remains a Senior Fellow at the Manhattan Institute's Center for State and Local Leadership. Broken Windows posits that dealing more effectively and comprehensively with low-level quality of life crime, previously ignored by over-stretched police forces, would pay dividends in combating more high-profile violent crime. By doing this, Wison and Kelling believed this would combat the general lawlessness that had overrun inner city areas in many American cities in the 1970s. Broken Windows policing was put to its first major large-scale test in the mid-1990s after the election of Rudolph Giuliani as mayor of New York City. Giuliani was an outspoken advocate of community policing, frequently citing the influence "Broken Windows" had on his thinking as mayor. Giuliani appointed Kelling’s intellectual collaborator William Bratton as New York City Police Commissioner in 1994, saying, "I chose Bill Bratton because he agreed with the Broken Windows theory.[31]

A follow-up book by Kelling and Catherine Coles published by the Manhattan Institute in 1996 led to further interest in community policing methods, leading many municipalities to adopt quality-of-life and community policing as official policy. Giuliani-era New York City Police Commissioner William J. "Bill" Bratton took these methods to Los Angeles on being appointed Los Angeles Police Department chief of police,.[32][33] Newark, New Jersey Mayor Cory Booker has been lauded for his Broken Windows-based approach to crime since taking office in 2006.[34][35]

Senior fellow Heather Mac Donald argues that successful crime prevention statistics from the 2008–2009 recession were a result of efficient policing, high incarceration rates, more police officers working, data–driven approaches such as CompStat which helps commanders target high–crime areas, and a policy of holding precinct commanders accountable for results.[36] She contends the decline of American cities, beginning during the 1960s, was a result of crime "spiraling out of control".[37]

The Manhattan Institute was one of the key institutions that successfully pressed for reform of the welfare system in the mid-1990s.[citation needed] Charles Murray's Losing Ground: American Social Policy 1950-1980 (1984) was one of the first books to argue that the welfare state had fostered a culture and cycle of dependency that was to the detriment of both welfare recipients and the United States as a whole.[38]

Myron Magnet's The Dream and the Nightmare: The Sixties' Legacy to the Underclass (1993) laid much of the intellectual foundation for the welfare reform movement, and was cited by President George W. Bush as the book that has influenced his thinking the most after the Bible. Karl Rove has stated that Dream underlies the entire compassionate conservatism movement.

Former senior fellow Jay P. Greene’s empirical research on the efficacy of school choice helped to convince the Supreme Court of the United States to affirm the constitutionality of school vouchers in its landmark Zelman v. Simmons-Harris decision. His research was cited four times, including three times by Justice Sandra Day O’Connor who court-watchers had identified as the “swing vote” on the case.[39][40]

Benjamin Zycher, former Senior Fellow at Manhattan Institute's Center for Medical Progress,[41] opposes allowing the federal government to negotiate prices in the Medicare Part D prescription drug program, and argues that patients and their doctors should make their own decisions to choose drugs like Vioxx, rather than having the U.S. Food and Drug Administration decide on the basis of "bureaucratized ... scientific study."[42]

The Manhattan Institute issued a report by Frank Lichtenberg, a business professor at Columbia University, on the adverse effects of drug price negotiating in the Veterans Administration. Lichtenberg said that the VA National Formulary excludes many new drugs. Only 38% of drugs approved in the 1990s and 19% of the drugs approved since 2000 are on the formulary. He also argues that the life expectancy of veterans "may have declined" as a result.[43]

The Manhattan Institute is a proponent of the hydraulic fracturing (fracking) method of extracting natural gas and oil from underground deposits. Opponents have been critical of the method owing to concerns that the chemicals involved in it lead to water contamination. In response to calls to ban fracking in parts of New York, the Manhattan Institute released a report in 2011 projecting that allowing fracking would stimulate the state economy to the tune of $11 billion.[44]

After the financial collapse of 2008, Paul Singer, chairman of the Manhattan Institute, called for regulation of all investors and traders. Singer wrote that the failures were in the private market, not government.[45]

The Wriston Lecture series, established in 1987 in honor of Walter B. Wriston,[46] seeks "to inform and enrich intellectual debate surrounding the great public issues of our day, and to recognize individuals whose ideas or accomplishments have left a mark on their world."[47] Several of the annual lectures have garnered national media attention and debate, such as 2008's "How to Read the Constitution" by the Honorable Clarence Thomas[48][49][50] and 2009's "Decline is a Choice" by Dr. Charles Krauthammer.[51][52][53]

American social scientist and Presidential Medal of Freedom recipient James Q. Wilson has delivered an annual Wilson Lecture on public policy for the Institute since 1997. 2008's lecture "Can Genes Explain our Politics?" was adapted for the Winter 2009 issue of City Journal.[54]

Supported by the William E. Simon foundation and part of the Institute's Social Entrepreneurship Initiative, the lecture has been delivered annually since 2007 in New York City. Senior Fellow Heather Mac Donald delivered the inaugural lecture which was adapted for and published in City Journal.[55] The 2009 lecture was delivered by Bridgespan Group founder Thomas J. Tierney.[56][57] The 2010 lecture was given by William Schambra, director of the Bradley Center for Philanthropy at the Hudson Institution.

Established in 2005, the annual Hayek Prize "honors the book published within the past two years that best reflects Friedrich von Hayek's vision of economic and individual liberty".[58] Winning authors deliver that year's Hayek Lecture and are awarded a $50,000 prize. The 2010 winners were Benn Steil and Manuel Hinds, authors of Money, Markets and Sovereignty.[59]

The Alexander Hamilton Award is awarded annually by the Manhattan Institute to individuals who have made a lasting contribution to New York City. The dinner that also serves to raise money for the Manhattan Institute. In 2008, tables at the awards dinner ranged from $75,000 to $5000 or $1000 for individual tickets. The recipients of the 2010 Alexander Hamilton Award were Joel Klein, Executive Vice President of News Corporation and former Chancellor of New York City Schools and Mortimer B. Zuckerman, Co-Founder, Chairman, and CEO, of Boston Properties, Inc., Chairman and Editor-in-Chief of U.S. News & World Report and Publisher of the New York Daily News.[60]

The Manhattan Institute launched its Young Leaders Circle program for policy-minded New York City-area young professionals on January 17, 2007 with inaugural speaker David Brooks.[61][62] The exclusive group meets monthly to hear from leading thinkers on the pressing issues of the day in an evening lecture and cocktail party forum. Past speakers include Ambassador John Bolton, Steve Forbes, Former Attorney General Edwin Meese, and Niall Ferguson, in addition to some of the Manhattan Institute's own senior fellows like Nicole Gelinas, Steven Malanga, and Peter W. Huber.

People currently affiliated with the Manhattan Institute include:

People formerly affiliated with the Manhattan Institute include:

Notable members of the board of trustees include: William Kristol, The Weekly Standard; Robert Rosenkranz, CEO, Delphi Financial Group, Inc; and Andrew Saul, Chairman of the Federal Retirement Thrift Investment Board.[63]