The Wizarding World of Harry Potter forms part of Universal Parks and Resorts' Islands of Adventure theme park in Orlando, Florida. It is one of seven themed areas within the park. The Wizarding World of Harry Potter was officially announced on May 31, 2007,[6][7] and after a two-and-a-half year construction period, the area officially opened to the public on June 18, 2010.[2][8]

The area's flagship attraction is Harry Potter and the Forbidden Journey which exists within a re-creation of Hogwarts School of Witchcraft and Wizardry. It takes riders on a journey through Harry Potter's wizarding world.[9] Other attractions include Dragon Challenge, a pair of dueling roller coasters, and Flight of the Hippogriff, a family roller coaster. The area also features a re-creation of Hogsmeade which includes a full-sized model of the Hogwarts Express as well as many gift shops and restaurants from the series of Harry Potter books. These including Dervish and Banges, Honeydukes, Ollivanders, Zonko's Joke Shop, The Three Broomsticks and The Hog's Head.

The concept of a Harry Potter themed attraction at a Universal Studios park was reportedly first discussed within the company in the late 1990s or early 2000s.[10] However, the rights to the Harry Potter franchise were owned by Time Warner at the time.[11] In 2001, Time Warner used this license to construct and operate the Harry Potter Movie Magic Experience at Warner Bros. Movie World on the Gold Coast, Australia. The attraction was a small indoor walkthrough featuring many re-creations of locations in the first two movies. After two years of operation this attraction was removed.[12][13]

In January 2007, About.com reported a rumour from a "highly credible source" that the Islands of Adventure park's Lost Continent area was going to be re-themed "to the stories and characters of one of the most popular children's franchises".[14] Other sources followed up in the next few days with unofficial confirmation that the new area would involve Harry Potter, and that it was being developed under the name "Project Strong Arm" in reference to the KUKA robotic arm technology it would utilise.[15][16] Nikki Finke reported her own confirmation of the Potter park plans in April,[17] followed shortly by a story in The Scotsman;[18] both reports were widely relayed by other media sources.[19][20][21] On May 31, 2007, Universal (in partnership with Warner Bros.) officially announced the 20-acre (8.1 ha) addition re-creating Hogwarts, the Forbidden Forest and Hogsmeade, with a planned opening in 2009.[5][6][7][22] 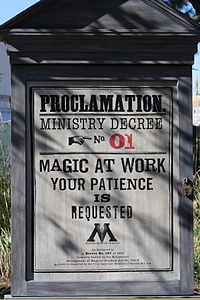 Themed billboards were located around the Wizarding World during the two year construction period.

Construction of the Wizarding World of Harry Potter began seven months after the official announcement, in January 2008. By July, the Flying Unicorn and Enchanted Oak Tavern were closed. The Flying Unicorn then began an almost two year refurbishment which transformed it into the Flight of the Hippogriff. The Enchanted Oak Tavern was later demolished. A bridge was built to connect The Lost Continent with Jurassic Park allowing guests to avoid the construction zone that was to be the Wizarding World. Construction progressed with the Hogwarts castle slowly taking shape. By September 2008, the Dueling Dragons entrance was moved to Jurassic Park to make room for construction of Hogsmeade. One month later, the old entrance was demolished. By September 2009, the top shell of Hogwarts castle was completed. On September 15, an announcement was made as to what exactly was going to be included in the Wizarding World. In early 2010, Universal increased the marketing of the area which included newspaper advertisements, billboards and television commercials. The Dueling Dragons were closed for some maintenance before being transformed into the Dragon Challenge.[23] Construction was complete by June 1, 2010 when the area began soft openings.[3]

A soft opening weekend was held for the media and reserved guests, starting on May 28, 2010. The park had two opening ceremonies that took place on June 16 and June 18, 2010. The first opening was reserved for the cast and crew of the Harry Potter films, J.K. Rowling (author of the novels), Universal Orlando Resort officials, as well as representatives from the media. The ceremony concluded with a fireworks display and a performance by the Orlando Philharmonic Orchestra, led by John Williams (composer of the music for the first three films). On June 18, the second ceremony occurred which officially opened The Wizarding World of Harry Potter to the public. Universal Orlando representative Bill Davis introduced the area to the audience which included actors from the films including Daniel Radcliffe, Rupert Grint, Michael Gambon, Warwick Davis, Tom Felton, Matthew Lewis, Bonnie Wright and James and Oliver Phelps. The NBC Today show[24] and The Weather Channel broadcast segments live from the park.[25][26][27] 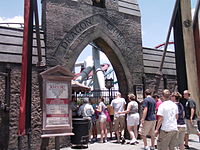 Dragon Challenge is a roller coaster which features two distinct tracks built to overlap and intertwine with each other. The ride was formerly in operation since the park's 1999 opening under the name Dueling Dragons.[28] The attraction was renamed in homage to the first task of the Triwizard Tournament, depicted in Harry Potter and the Goblet of Fire.[29] The two sides of the coaster have been renamed "Hungarian Horntail" and "Chinese Fireball",[28] after two of the dragon breeds which appear in the book. It is the only chasing inverted roller coaster in the world. The queue for this ride features many Harry Potter relics, including the Goblet of Fire and the Triwizard Cup.

Flight of the Hippogriff

Main article: Flight of the Hippogriff 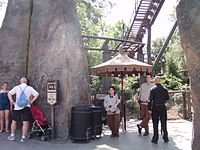 Entrance of Flight of the Hippogriff

Flight of the Hippogriff is a steel roller coaster designed for families. The ride opened in 2000 as the Flying Unicorn.[30] Similar to the Dragon Challenge, this ride was re-themed prior to the opening of the Wizarding World. The roller coaster's back-story is that Hogwarts' Care of Magical Creatures professor Hagrid is teaching young wizards to fly on a Hippogriff (as Harry does in Harry Potter and the Prisoner of Azkaban) by using a wicker replica of the creature. A re-creation of Hagrid's Hut is passed on the way for a lesson from Hagrid himself on how to properly approach a hippogriff.[31][32]

Harry Potter and the Forbidden Journey

Harry Potter and the Forbidden Journey is a new attraction inside the replica of Hogwarts Castle, simulating a tour of the castle and its surrounding grounds. Visitors initially walk through the castle, interacting with various characters and props from the Potter series,[33] before boarding a "magical bench" (controlled with a KUKA robotic arm system[34]). Throughout the ride, guests are taken around the outside of the castle, encountering the Whomping Willow, a horde of dementors, and a Quidditch match.[35]

Dining, shopping and other attractions 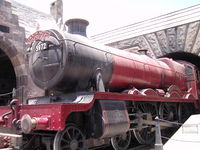 A re-creation of the Hogwarts Express greets guests when entering Hogsmeade.

Other than the main rides, The Wizarding World of Harry Potter is also home to gift shops, restaurants and other tourist attractions. Several of these are re-creations of locations in the Harry Potter books while others have been created specifically for the park.

A re-creation of the Hogwarts Express lies at the entry to Hogsmeade. The re-creation features "billowing steam and an iconic whistle". In the Potter series the Hogwarts Express is the train used to transport students from London to Hogwarts. The Owl Post is a working post office (where postcards and letters will be delivered with an authentic Hogsmeade postmark) that also sells stationery, writing implements, stamps, and owl-related gifts.

The Three Broomsticks, based on the inn and pub from the Potter series, offers a variety of food and beverage items from the Harry Potter universe including butterbeer, pumpkin juice, strawberry-peanut butter ice cream (as seen in Harry Potter and the Chamber of Secrets), chocolate cauldron cakes in addition to a menu composed of traditional British fare (Shepherd's pie, fish and chips, etc.).[36][37] Butterbeer, which can be purchased with a souvenir mug, is offered as a non-alcoholic beverage and comes in both regular and frozen forms, found at the beginning of Hogsmeade fresh off the tap from the butterbeer cart. Similarly, The Hog's Head is based on the pub from the Potter series owned by Aberforth Dumbledore.[36][37] Honeydukes is a sweet shop, based on Honeydukes Sweetshop in the Potter series. The shop sells many items from the Harry Potter universe including Chocolate Frogs, Acid Pops, exploding bonbons, Cauldron Cakes, treacle fudge, Fizzing Whizzbees, Pepper Imps, and Bertie Bott’s Every-Flavour Beans.[38] 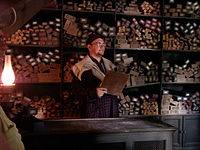 Various Harry Potter merchandise items can be purchased from three different gift shops in Hogsmeade. Dervish and Banges is a store selling magical items, as well as Quidditch supplies, Hogwarts clothing, and other merchandise. The store is based on Dervish and Banges in the Potter series.[39] Zonko's is a toy and joke store, based on Zonko's Joke Shop in the Potter series.[40] The third shop is Filch's Emporium of Confiscated Goods. It is a general gift shop (named for Hogwarts caretaker Argus Filch) offering Hogwarts souvenirs (such as clothing and stationery), replicas of props from the Potter films, and other toys and souvenirs. The shop is at the exit to Harry Potter and the Forbidden Journey and is where guests can obtain photos of their ride experience.[41]

In the book series, Ollivanders wand shop is located in Diagon Alley, not Hogsmeade, however, the attraction re-created the shop as Ollivanders, portraying it as a branch of the original where Harry purchases his wand in Harry Potter and the Philosopher's Stone (known in the United States as Harry Potter and the Sorcerer's Stone). Unlike other shops in the Wizarding World of Harry Potter, visitors are admitted in groups of 20 to experience the premise from the Potter series, that "the wand chooses the wizard". Similar to the first film, the wand keeper and a selected guest test a variety of wands until the right one is found. After experiencing the attraction, souvenir wands can be purchased.[42]

The Wizarding World of Harry Potter was well-received by Harry Potter fans and general guests alike. Matt Blum of Wired stated "every detail is finely crafted to enhance the experience".[43] An Orlando Sentinel article stated "muggles will love their Harry Potter adventure" but identifies the need for the park to offer Universal Express Passes due to large crowds. It also stated Harry Potter and the Forbidden Journey is a truly one-of-a-kind experience that cannot easily be described.[44] Lisa Minot, from The Sun, stated "after a sneak peek, I can say it is the most faithful recreation of JK Rowling's books and movies ever seen. Fans will be in heaven."[45] Leigh Caldwell from Traveling Mamas noted that although The Wizarding World of Harry Potter is ideal for the whole family, it's not designed for anyone under 3 years old. She went on to consolidate others' comments about the area: "there is no doubt that fans of the Harry Potter books and movies are going to enjoy the heck out of a visit to the Wizarding World".[46] John Frost from the Disney Blog congratulated Universal about all aspects of the area from rides to shops, and from the entertainment to the food.[47][48] Boris Johnson, Mayor of London criticised the fact that the park was chosen to be in Orlando, rather than in London, stating that it was “utterly mad” to leave it to the Americans “to make money from a great British invention.”[49]