Dragon Challenge is a pair of intertwined inverted roller coasters in the The Wizarding World of Harry Potter area of Universal Studios' Islands of Adventure. The ride is themed to two dragons, one side being Chinese Fireball and the other Hungarian Horntail. It features a layout in which the two trains share adjacent lift hills, but then traverse two completely unique courses. The ride was constructed by Bolliger & Mabillard of Switzerland. The Chinese Fireball dragon reaches a top speed of 63 mph and the Hungarian Horntail dragon reaches a top speed of 57 mph. Both dragons have a two minute and twenty-five second ride duration and include five inversions.

When Islands of Adventure opened on May 28, 1999, the ride was called Dueling Dragons and was located in The Lost Continent area with the two sides named Fire and Ice. During much of the ride's history, the trains were normally dispatched simultaneously, providing three near-miss encounters along the courses. After a renovation period, the attraction soft-opened as Dragon Challenge on June 1, 2010 and officially opened with The Wizarding World of Harry Potter area on June 18, 2010.

Entrance of the former Dueling Dragons coasters at Islands of Adventure

Dueling Dragons was one of Islands of Adventure's original attractions, opening with the theme park on May 28, 1999 in the park's The Lost Continent area. At the time, it was the only fully inverted dueling roller coaster in the world. The ride was themed to two dueling dragons, with one track named Ice and the other named Fire. 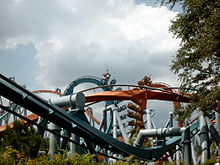 Head-to-head on the former Dueling Dragons

The ride featured an extremely long, elaborately themed queue. It was themed on a ruined castle, passing through the dungeons, which included human skeletons, flaming torches, and cobwebs. The queue split in two for the different coasters. At this intersection, riders would turn right to ride on the Ice Dragon and left for Fire Dragon. Merlin would frequently taunt riders with lines which included-

"Turn right for Ice and left for Fire! Now, pick the dragon you desire"

"Past this point of no return, your only choice is freeze or burn"

"Turn left for Fire, turn right for Ice! I know not which is best advice"

"Earthworms and rancid beer, why on earth are you still here?"

"You do not listen to this old magician, and so you'll need a good mortician"

"If you continue along this path, you will face the dragons wrath"

When guests reached the boarding area, The ride attendants used several quotes when dispatching the trains including-

"Onward to thy doom"

"May the fates be with you"

"May the dragons spare you"

"Keep your hands inside the dragon"

"Ice/Fire Dragon, you are clear for battle"

"To ride the dragon was your wish. Now you'll be his tasty dish"

"Once beyond the castle gate, there is no turning back. It's far, far too late"

"Swords and Shields will not work, for you are headed where the dragons lurk"

To improve the dueling aspect of the ride, the trains were weighed as they were being dispatched in order to properly time the near-miss points:[1]

In May 2007, Universal announced plans to construct The Wizarding World of Harry Potter, a new section devoted to the popular Harry Potter book and film series. Dueling Dragons, as well as the adjacent Flying Unicorn roller coaster, were shown to be included in the new section. In September 2009, Universal confirmed the move and also announced that the attraction would be renamed Dragon Challenge upon opening of the Wizarding World of Harry Potter on June 18, 2010.

The two sides of the attraction were announced to be renamed as Hungarian Horntail and Chinese Fireball, although it was not stated at the time which existing track (Fire or Ice) would be given which name.,[2] but the Eye on Orlando podcast team revealed that the Chinese Fireball would be the new name for the Fire Dragon, leaving the Ice Dragon to be renamed to Hungarian Horntail.[when?]

In September 2008, the entrance to Dueling Dragons was relocated to the Jurassic Park section to aid in the construction of the Wizarding World. The old entrance to the ride, featuring Fire and Ice dragons in battle was demolished one month later. The attraction soft opened on June 1, 2010 under the new name of Dragon Challenge[citation needed]. It officially opened with The Wizarding World of Harry Potter on June 18, 2010.

The queue takes guests past a number of banners for the Triwizard Tournament showing support for the four contestants. After passing the Weasley's crashed flying Ford Anglia, they enter the Champions' Tent. From there guests pass a large pedestal with the Triwizard Cup glowing at the top, a hall illuminated by floating candles, and a long system of tunnels. Guests pass a wooden wall as they hear the dragons growling and roaring behind it. Above the ride station is the shadow of a dragon flying above through tears in the tent.

The restraints on the Chinese Fireball trains are yellow, and the Hungarian Horntail trains' restraints are blue. However, the front row restraints on both sides are pink, as they represent the dragons' mouths. Every train has two seats (rows 3 & 6) designed to fit guests with "certain larger body dimensions". 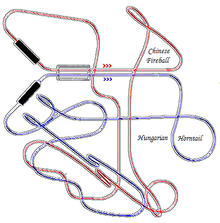 The tracks are filled with sand to reduce noise, because of the proximity of the coaster to Dr. Phillips High School. Shortly after the park opened, huge walls behind the ride were put up after local residents complained about the screaming.[citation needed]

After a pair of incidents in July and August 2011 in which riders were hit by flying objects during the course of the ride, Universal officials announced plans to operate the two roller coasters separately, pending the completion of an investigation. This is the first major change to the ride's operation since its opening in 1999.[4] In October 2011, Universal officials announced that the dueling aspect of the ride was to be removed permanently, with the ride instead becoming "a high-speed chase between two coasters."[1]

In 2010 this roller coaster was awarded FireballWorld's coaster of the year award.[16]