Katanga is one of the provinces of the Democratic Republic of the Congo. Between 1971 and 1997, its official name was Shaba Province. Under the new constitution, the province was to be replaced by four smaller provinces by February 2009; this did not actually take place.

Katanga's regional capital is Lubumbashi. Its area is 518,000 km² (larger than California and 16 times larger than Belgium). Katanga had a population estimated in 2003 at about 8,167,240. Farming and ranching are carried out on the Katanga Plateau. The eastern part of the province is a rich mining region, which supplies cobalt, copper, tin, radium, uranium, and diamonds. The capital city, Lubumbashi, is the second largest city in the Congo.

In the past, Katanga has struggled significantly for independence from the rest of the country.

Moïse Katumbi Chapwe, a businessman, is the governor of Katanga province. He took office on 24 February 2007.[2]

Copper mining is an important part of the economy of Katanga province.[3] Cobalt mining by individual contractors is also prevalent. There are a number of reasons cited for the discrepancy between the vast mineral wealth of the province and the failure of the wealth to increase the overall standard of living.[4] Gecamines is the state owned mining company which has monopoly concessions in the province.

The Jason Sendwe Hospital is the largest hospital in the province. It is located in Lubumbashi. 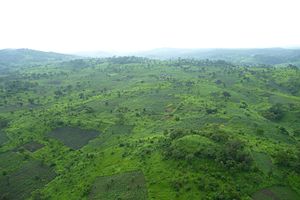 The province forms the Congolese border with Angola and Zambia. The province also borders Tanzania, although Katanga province and Tanzania do not share a land border but the border is within Lake Tanganyika.

TESOL, the English Language School of Lubumbashi, is a secondary school that serves the expatriate community. It was founded in 1987 on the grounds of the now defunct French School.[6]

Katanga Province has limited railway service centered around Lubumbashi. Reliability is limited. The area also has an airport called Luano Airport which is located northeast of Lubumbashi.