Dioscorea alata, known as purple yam and many other names, is a species of yam, a tuberous root vegetable, that is bright lavender in color. It is sometimes confused with taro and the Okinawa sweet potato (Ipomoea batatas cv. Ayamurasaki). With its origins in the Asian tropics, D. alata has been known to humans since ancient times.[2]

Because it has become naturalized throughout tropical South America, Africa, Australia, the US southeast, D. alata has many different common names from these regions. In English alone, aside from purple yam, other common names include greater yam, Guyana arrowroot, ten-months yam, water yam, white yam, winged yam, or simply yam.[2] In other cultures and languages it is known variously as uhi in Hawaiʻi, ratalu or violet yam in India, kondfal (कोंदफळ) in Marathi, ube in the Philippines, rasa valli kilangu in Tamil, ʻufi in Tonga, Samoa and Tahiti, and khoai mỡ in Vietnam. 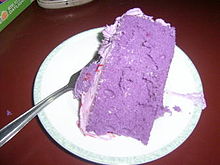 A piece of cake made with purple yam

Dioscorea alata tuber, the edible part of the plant.

Ube halaya in Philippine cuisine is made from mashed purple yam.

Purple yam is used in a variety of desserts, as well as a flavor for ice cream, milk, Swiss rolls, tarts, cookies, cakes, and other pastries. In the Philippines, it is eaten as a sweetened dessert or jam called ube halaya and added as an ingredient in the ice dessert called halo-halo. In Maharashtra, the stir-fried chips are eaten during religious fasting. Purple yam is also an essential ingredient in Undhiyu.

D. alata is also valued for the starch that can be processed from it.[2]

In folk medicine, D. alata has been used as a laxative and vermifuge, and as a treatment for fever, gonorrhea, leprosy, tumors, and inflamed hemorrhoids.[3]

D. alata is sometimes grown in gardens for its ornamental value.[2]

Dioscorea alata is an introduced plant persisting in the wild in the United States in Louisiana, Georgia, Florida, Puerto Rico, and the U.S. Virgin Islands. It is also an invasive species, at least in Florida.[4]