The current Supreme Commander of the Irish Defence forces is His Excellency Michael D Higgins in his role as President of Ireland.[5] All Irish Defence Force officers hold their commission from the President, however in practice the Minister for Defence acts on the President's behalf and reports to the Government of Ireland. The Minister for Defence is advised by the Council of Defence on the business of the Department of Defence.[6]

Ireland's favourable geographical location, on the north-west border of the European Union, makes any external threat or future invasion unlikely. The state has a long-standing policy of non-belligerence in armed conflicts that included neutrality in World War II. For these reasons, the Republic's military capabilities are relatively modest. However, the state has a long history of involvement in United Nations Peacekeeping operations. Functions of the Defence Forces include:

After the rising the Volunteers gave allegiance to the First Dáil. At this time the Volunteers became known as the Irish Republican Army (IRA). The IRA waged a guerrilla campaign against British rule in Ireland between 1919 and 1921.

A Truce brought hostilities to an end on 11 July 1921 and the Anglo-Irish Treaty was signed on 6 December. The Provisional Government was then constituted on 14 January 1922. Many IRA men who fought in the War of Independence were dissatisfied with the Treaty and both Civil War or reoccupation by the British were possible.[6] In February 1922, the Provisional Government began to recruit volunteers into the new Irish National Army. The Irish Civil War began on the 28 June 1922 between the Republican Anti-treaty IRA and the newly-recruited pro-treaty National Army. The Civil War ended on 24 May 1923, Frank Aiken IRA Chief of Staff ordered IRA volunteers to dump arms and the new Irish Free State slipped into an uneasy peace.[6]

On 3 August 1923 the new state passed the "Defence Forces (Temporary Provisions) Act", raising "an armed force to be called Oglaigh na hEireann (hereinafter referred to as the Forces) consisting of such number of officers, non-commissioned officers, and men as may from time to time be provided by the Oireachtas."[7] The establishment of the Forces was on 1 October 1924.[6]

The state was officially neutral during World War II, but declared an official state of emergency on 2 September 1939 and the Army was mobilised. As the Emergency progressed, more and newer equipment was purchased from Britain and the United States. For the duration of the Emergency, Ireland, while formally neutral, tacitly supported the Allies in several ways.[8] German military personnel were interned in the Curragh along with the belligerent powers' servicemen, whereas Allied airmen and sailors who crashed in Ireland were very often repatriated, usually by secretly moving them across the border to Northern Ireland.[8] G2, the Army's intelligence section, played a vital role in the detection and arrest of German spies, such as Hermann Görtz.

Ireland became a member of the United Nations in 1955. The first contribution to peacekeeping was in 1958 when Army officers were assigned to the United Nations Observer Group in Lebanon (UNOGIL). Since 1958 the Defence Forces have had a continuous presence on peace support operations. The first armed peacekeeping mission was to the Operation des Nations Unies au Congo (ONUC) in 1960. The Defence Forces have been continuously on armed UN missions - except between May 1974 to May 1978 but did retain overseas unarmed observer mission during this period. In October 2009, a memorial to Irish personnel who served as United Nations peacekeepers was unveiled in the town of Fermoy. It records that there was a total of ninety Irish fatalities while on active service with the UN until that date.[9] 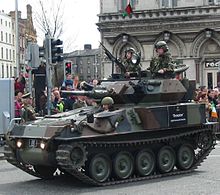 The Irish Army has 8,500 active personnel,[11] and 13,000 in the Army Reserve. The country is divided into three areas for administrative and operational reasons, and in each area there is an Infantry brigade.

In addition to the Brigades Structure, there is also a Defence Forces Training Centre (DFTC), a Logistic Base in the Curragh and a number of special establishments such as the Equitation School, Army Bands, and the Army Ranger Wing. In the case of Corps which support the Infantry, a Corps Director and staff are provided to coordinate the purchase of specialised equipment, the execution of specialised training, etc. The three brigade group structure envisages distinct operational areas of responsibility for each of the brigades. The First Brigade has primary responsibility for operational tasks in South, the Second for operational tasks in the East and the Fourth Brigade for operational tasks in the West. Practical operational considerations dictate the requirement to outline operational areas of responsibility. The brigade group structure is based on strengthened combat and combat support elements and streamlined combat service support elements.

Irish infantry are equipped with assault rifles, machine guns, grenade launchers, hand grenades, and anti-tank weapons. Most weapons used by their defence forces follow NATO standards, and are purchased from abroad, with the Ireland having a very limited arms industry. The Irish Army has light armoured vehicles, with the primary vehicle being the MOWAG Piranha, armed with machine guns. The Irish Army also use the FV101 Scorpion armoured reconnaissance vehicle, equipped with a 76mm low velocity gun and a 7.62mm machine gun. Its artillery capabilities consist of 120mm mortars, 105mm howitzers, 81mm mortars, and 60mm mortars.

There are two secondary roles:

The Air Corps is not officially tasked with the traditional air force role of defending Irish airspace. This was removed from its remit, as has SAR (search and rescue) which is carried out by the Irish Coast Guard.

The Navy has eight offshore patrol vessels which are operated in support of the service's main roles, inflatable sea going craft, and training vessels. The Naval Service maintains highly trained armed boarding parties that can seize a vessel if necessary, and a special unit of frogmen called the Naval Service Diving Section. While the Naval Service does not have any heavy warships, all of the naval vessels have enough firepower to enforce their policing roles.

The primary role is defined as "National Security", with secondary roles which include:[13]

The interests of members of the Defence Forces are represented by a number of representative associations similar to trade unions.

Rank-and-file members of the Permanent Defence Forces are represented by the Permanent Defence Force Other Ranks Representative Association (PDFORRA). PDFORRA is affiliated to the Irish Conference of Professional and Service Associations (ICPSA) and to the European Organisation of Military Associations (EUROMIL). In 2009, members of PDFORRA took part in the Irish Congress of Trade Unions (ICTU) protest against the government's handling of the 2008–09 financial crisis. The Department of Defence warned that Defence Forces members could not take part in or sponsor any "public agitation", and that PDFORRA had "no express permission" for members to take part in the protests.[16]

All ranks of the Reserve Defence Forces are represented by RDFRA.[17]

The Defence Forces operate a number of bases throughout the Republic of Ireland: 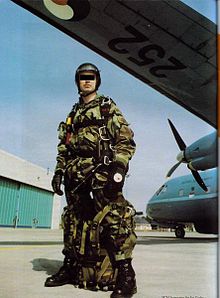