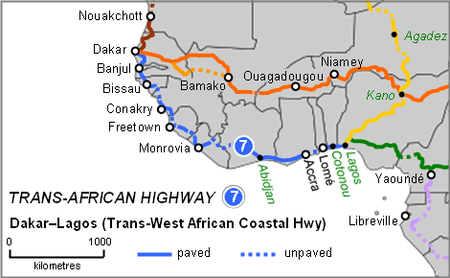 The Trans–West African Coastal Highway is a transnational highway project to link 12 West African coastal nations, from Mauritania in the north-west of the region to Nigeria in the east, with feeder roads already existing to two landlocked countries, Mali and Burkina Faso.[1]

The eastern end of the highway terminates at Lagos, Nigeria. Some organizations such as the Economic Community of West African States (ECOWAS) consider its western end to be Nouakchott, Mauritania, and others such as the United Nations Economic Commission for Africa consider it to be Dakar, Senegal, giving rise to these alternative names for the road:

The highway is a project of ECOWAS and the New Partnership for Africa’s Development (NEPAD) of the AU, with funding from the African Development Bank. The route is Trans Africa Highway No. 7 (TAH7) in the International Road Federation's list of nine highways which it regards as priorities for a Trans-Africa Highway network.[3]

The cities and countries served, and status of the road are as follows. Information about construction required is from two sources: the ECOWAS website,[4] undated document, and the ADB website, consultancy report date August 2003.[2] Note: 'spur' indicates the city is on a spur off the main alignment of the highway, 'existing' could mean a pre-existing national road has been adopted for the route or a section has been newly constructed.

Feeder roads and other transnational highways

Bamako, Mali and Ouagadougou, Burkina Faso (the two landlocked countries of ECOWAS) are already linked to the coastal highway by paved highways to Abidjan, Accra and Lomé. Lagos is linked via the largest network of paved highways in West Africa, the national road network of Nigeria, with links to the neighbouring countries of Niger, Chad and Cameroon.

The Trans-Sahelian Highway is another ECOWAS project running parallel to the coastal highway linking the Sahelian countries of West Africa from Dakar to Ndjamena, Chad.[3]

Two other transnational roads are also under development from Lagos to link to the Trans–West African Coastal Highway:[3]