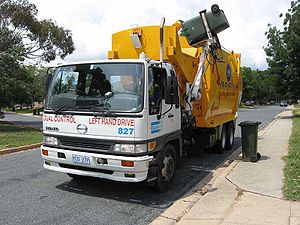 Prior to the 20th century the amount of waste generated by a household was relatively small. Household wastes were often simply thrown out the window, buried in the garden or deposited in outhouses (see more at urban archaeology). When human concentrations became more dense, waste collectors, called nightmen or gong farmers were hired to collect the night soil from pail closets, performing their duties only at night (hence the name). Meanwhile, disposing of refuse became a problem wherever cities grew. Often refuse was placed in unusable areas just outside the city, such as wetlands and tidal zones. One example is London, which from Roman times disposed of its refuse outside the London Wall beside the River Thames. Another example is 1830s Manhattan, where thousands of hogs were permitted to roam the streets and eat garbage. A small industry developed as "swill children" collected kitchen refuse to sell for pig feed and the rag and bone man traded goods for bones (used for glue) and rags (essential for paper manufacture prior to the invention of wood pulping).[1] Later, in the late nineteenth century, trash was fed to swine in industrial piggeries.

As sanitation engineering came to be practiced beginning in the mid-19th century and human waste was conveyed from the home in pipes, the gong farmer was replaced by the municipal trash collector as there remained growing amounts of household refuse, including fly ash from coal, which was burnt for home heating. In Paris, the rag and bone man worked side by side with the municipal bin man, though reluctantly: in 1884, Eugène Poubelle introduced the first integrated kerbside collection and recycling system, requiring residents to separate their waste into perishable items, paper and cloth, and crockery and shells. He also established rules for how private collectors and city workers should cooperate and he developed standard dimensions for refuse containers: his name in France is now synonymous with the garbage can. Under Poubelle, food waste and other organics collected in Paris were transported to nearby Saint Ouen where they were composted. This continued well into the 20th century when plastics began to contaminate the waste stream.[2]

From the late-19th century to the mid-20th century, more or less consistent with the rise of consumables and disposable products municipalities began to pass anti-dumping ordinances and introduce curbside collection.[3] Residents were required to use a variety of refuse containers to facilitate kerbside collection but the main type was a variation of Poubelle's metal garbage container. It was not until the late 1960s that the green bin bag was introduced by Glad. Later, as waste management practices were introduced with the aim of reducing landfill impacts, a range of container types, mostly made of durable plastic, came to be introduced to facilitate the proper diversion of the waste stream. Such containers include blue boxes, green bins and wheelie bins or MGBs.

Over time, waste collection vehicles gradually increased in size from the hand pushed tip cart or English dust cart, a name by which these vehicles are still referred, to large compactor trucks. 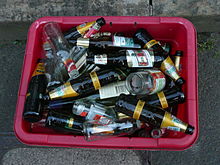 Glass for collection in Edinburgh, Scotland.

Recyclable materials that may be separately collected from municipal waste include:

Curbside collection of recyclable resources is aimed to recover purer waste streams with higher market value than by other collection methods. If the household incorrectly separates the recyclable elements they load may have to be put to landfill if it is deemed to be contaminated.

Curbside collection and household recycling schemes are also being used as tools by local authorities to increase the public's awareness of their waste production.

Curbside collection is commonly considered to be completely environmentally friendly. This may not necessarily be the case as it leads to an increased number of waste collection vehicles on the road, in themselves contributing to global warming through exhaust emissions[citation needed] until the time of their conversion to clean energy.

New and emerging waste treatment technologies such as mechanical biological treatment may offer an alternative to curbside collection through automated separation of waste in recycling factories.[citation needed]

Halifax Regional Municipality (HRM) in Nova Scotia, Canada, with a population of about 375,000, has one of the most complex curbside collection programs in North America. Based on the green cart, it requires residents to self-sort refuse and place different types at the curb on alternating weeks. As shown in the photo at left, week 1 would see the green cart and optional orange bags used for kitchen waste and other organics such as yard waste. Week 2 would permit non-recoverable waste in garbage bags or cans. Blue bags are used for paper, plastic and metal containers. Together with used grocery bags containing newspapers, they may be placed on the curb either week. In summer, the green cart is emptied weekly due to the prevalence of flies. HRM has achieved a diversion rate of approximately 60 percent by this method.

Calgary, Alberta has adopted "Curbside" Recycling and uses blue bins. The blue cart program accepts all types of recycables, including plastics 1-7. It is picked up weekly for the cost of $8.00 per month. This program is mandatory.

Many Canadian municipalities use "green bins" for curbside recycling. Others, such as Moncton, use wet/dry waste separation and recovery programs.[4] 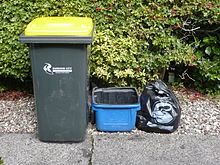 Kerbside collection bins in Dunedin, New Zealand. The yellow-liddied wheelie bin is for non-glass recyclables, and the blue bin is for glass. The two bins are collected on alternating weeks. Official council bags are used for general household waste, and are collected weekly.

In New Zealand, curbside collection of general refuse and recycling, and in some areas organic waste, is the responsibility of the local city or district council, or private contractors. Practices and collection methods vary widely from council to council and company to company. Some examples of collection are:

By 1996 the New Zealand cities of Auckland, Waitakere, North Shore and Lower Hutt had curbside recycling bins available. In New Plymouth, Wanganui and Upper Hutt recyclable material was collected if placed in suitable bags.[7] By 2007 73% of New Zealanders had access to kerbside recycling.[8]

In the United Kingdom, the Household Waste Recycling Act (2003) requires local authorities to provide every household with a separate collection of at least two types of recyclable materials by 2010.[10] There has been criticism in the difference of schemes used in the country such as the colour of bins, whether they are bins boxes or bags, and also the fact that clutter roads and how the additional trucks and collections needed have carbon dioxide emissions too. Some find the colour differences confusing, and people want a national scheme. A typical example is to compare two neighbouring councils in greater Manchester, Bury council and Salford. Bury uses blue for cans, plastic and glass, green for paper and cardboard and brown for garden waste. Salford uses blue for paper and card, brown for cans plastic and glass and pink for garden waste. Most councils use grey or black for general waste, with a few exceptions such as Liverpool, which uses purple for general waste, a colour used by no other council

A few councils are using "forced" recycling, by replacing the large, 240l general waste bin with a smaller 180l or 140l bin, and using the old 240l one for recyclables. This may be made worse by fortnightly collections of the "small" bin, and strict rules such as "No extra bags will be taken" and "Bin lids must be fully closed". Stockport Council is a notable user of this scheme. Their recycling rates have risen substantially as a result, but there are usually complaints from families. Trafford council also use a similar scheme, but the small grey bin is emptied every week. In addition, the two named councils, and more, collect food waste together with garden waste, by sending out kitchen caddies and compostable liners. These prevent food waste (including meat) from going to landfill, and to increase the councils recycling rate. The food and garden waste is usually collected weekly or fortnightly, and is taken to an In Vessel composter or Anaerobic digester, where the waste is turned into soil improver for use on local farms.

In the north west, all the glass collected is used within the uk, around half of the plastics and cans are used in the uk; the rest is sent further afield to Europe or China to be made into new products, and paper and paperboard collected is sent to local paper mills to be made into newspapers, tissues, paperboard and office paper. Again some of the paper will be sent further afield.

Some councils only have 3 bins- general, organic and recyclables. This means that plastics, cans and glass go in the same container as paper and cardboard. Although this is much easier for the residents, there is more sorting required, and the paper quality is sometimes of a low grade due to food contamination or shards of glass in the paper, and so this scheme is criticized.

Also, most councils require residents to remove lids off bottles, and wash them out to avoid smells. This is because the lids are made from a different type of plastic (PP) to the bottle (PET/HDPE). Labels are rarely required to be removed, however. This also means that only plastic bottles are recycled. Councils are still trying to make clear that plastic tubs, bags and cling film cannot be recycled through the curbside economically. If too much contamination is collected then this results in the whole vehicle load going to landfill at a high cost. Contamination is usually a problem if recyclables are collected in wheelie bins, as the worker can only look at the top; there may be contamination 'hidden' at the bottom. Councils that use many bags and boxes (Edinburgh) suffer from less contamination but are complicated and the loose paper and cardboard, and recycling bags are blown around, and paper can be wet.

This type of collection service is subject to growing criticism.