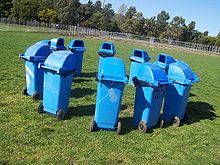 A collection of movable waste containers in Australia 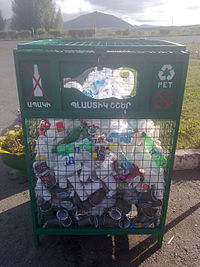 Curbside waste containers usually consist of three types: trash cans (receptacles often made of tin, steel or plastic), dumpsters (large receptacles similar to skips) and wheelie bins (light, usually plastic bins that are mobile). All of these are emptied by collectors who will load the contents into a garbage truck and drive it to a landfill, incinerator or crusher facility to be disposed of. The standard-sized UK wheelie bin household collection is 240 litres or more.

In certain areas there is also a recycling service, often with one or more dedicated bins intended to receive items that can be recycled into new products. These bins are sometimes separated into different categories (usually represented by colours) which determine what materials can be inserted into the bin. The contents of the bins are taken to a recycling plant to be processed, and there are various systems for recycling-bin collection: single-bin-combined stream systems, multiple-bin systems, and cyclic collections with different materials collected on different days.

In some countries there are large (5 cubic meters and more) waste containers serving several buildings. Special garbage trucks have been developed for raising these heavy containers and emptying them. Another option is a truck that replaces the container with a clean one, and takes the whole container to the garbage depot. This design is unique an the same in many ways, but never underestimate it. Without it, how would we carry or bring lots of trash at a time. It also gives you less work to do.

The "wheelie bin" is a waste container on wheels designed to make it easier for users to transport heavy loads of refuse to the curb or other pick-up point. George Dempster invented the Dempster-Dumpster system in the 1930s for automatically loading the contents of standardized mobile steel containers onto the dustcart. This led to the classic Dempster Dumpmaster waste collection vehicle of the 1950s, but wheelie bins did not become commonplace until the 1970s. The term dumpster is frequently used as a generic term for a large MGB or the non-mobile variety (known as a skip in the UK or Australia) in the United States. The modern bin is a German invention of the 1970s in a patent held by Schneider, and licensed to other companies outside Germany. 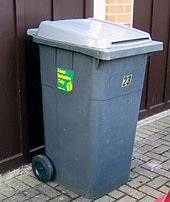 A wheelie bin in Berkshire, England

The smaller wheelie bins, for domestic or light commercial use, typically hold 120 to 360 litres (26 to 79 imp gal; 32 to 95 US gal), with 240 litres (53 imp gal; 63 US gal) being the most common. They have a hinged flap lid and two wheels on the bottom on the same side as the lid hinge. There is a bar behind the hinge on the top of the bin which is used to move it, or to hoist it up onto a garbage truck for emptying. The 240 litre bin is usually considered to have the same capacity as three traditional waste containers. In the UK, "wheelie bins" for non-recyclable domestic waste are currently collected either weekly or once a fortnight, depending on the local Council's waste management policies.

The design objectives behind the bin were efficient use of space and safety: to provide at least as much space as the older round bins, whilst reducing the risk of injury caused by moving it. This is important for both the householder and the waste collector, who risked injury through lifting the traditional bin or from sharp, or possibly contaminated objects in garbage bags. Standardisation of dimensions is important because the bins must be lifted by a standard sized hoist on the dustcart. The bins are lifted by the lip at the front which must be designed for maximum stiffness and mechanical strength. The underside of the lip is therefore reinforced by numerous ribs in the case of the thermoplastic bins. Steel bins have a much simpler lip owing to the properties of steel.

The early standard for these bins was the German DIN Standard 30740 and DIN 30700 parts 1 + 2 and later RAL-RG 723/2, but in the European Union the specification of wheelie bins is now governed by the European Standard EN840, Part 1 of which covers the construction and dimensions of two wheeled bins with a range of capacities.

Many local authorities have made this type of bin compulsory, and usually require that bins are presented at the curb (or kerb) for collection. A waste container or waste basket is used for just simple and plain old waste. you could also put in small items but never gum. Gum will ruin a part of it.

The larger bins, intended for commercial use, are mounted on four wheels and usually have a folding lid and are covered by Part 2 of EN 840. They have capacities of 500 to 1,280 litres (110 to 280 imp gal; 130 to 340 US gal), with 1,100 litres (240 imp gal; 290 US gal) being the most common. Galvanized steel is often used for their construction in place of high density polyethylene, where resistance to vandalism is important. In the UK most common Galvanised Steel waste container is the Continental 1100 manufactured in the UK by Taylor which conforms to Parts 2, 5 and 6 of the EN840 Standard.

Materials subject to the Waste Electrical and Electronic Equipment (WEEE) Directive are marked with a "Wheelie Bin" label, consisting of an iconic representation of a wheelie bin crossed with a large X. 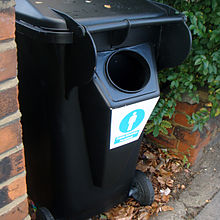 The traditional wheelie bin takes on an additional function in the wheelie bin urinal. It is a makeshift solution to the shortage of proper urinals in city centres after the closing time for pubs, when urination sometimes becomes an urgent need. The device involves a relatively simple adaptation of the ubiquitous waste container to an additional purpose.[1] It was designed by Stephan Bischof. Collected in a chamber at the bottom that contains grass clippings, the urine can be converted into a fertilizer. Normal rubbish collection functions are not impaired by the adaptation to urine collection.[2][3] 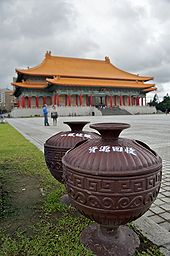 Waste containers at the National Theatre in Taiwan

Certain public areas such as parks have litter bins which are placed alongside paths frequently walked by visitors. This encourages people to avoid littering, which creates an unhealthy and aesthetically unpleasant social environment.

Bins in outdoor locations or other busy public areas are usually mounted to the ground or floor. This discourages theft, and also reduces vandalism by making it harder for the bins to be physically moved or maneuvered.

In the past terrorists have left bombs in bins. The bomb is much less likely to be spotted than an unattended bag and the metal bins provide extra shrapnel that injures people nearby when it detonates. For this reason there are no bins in most railway stations, most airports and many shopping centres in the United Kingdom, or if they are provided they are just a bin bag hanging from a metal hoop.

Apartment buildings often have dust flumes in which residents can dispose of their waste in stainless steel waste containers. These chutes usually lead to some large receptacle or waste-disposal complex in the basement.

Uses of the term in popular culture

The term 'garbage can' is also used for a model of decision making, the Garbage Can Model.

A 'trash can' metaphor is sometimes used for a place in a computer which stores a collection of deleted files. This location is called 'Trash' on an Apple Macintosh, BeOS and other systems, and 'Recycle Bin' on Microsoft Windows. Formerly known as 'Trash' and 'Wastebasket' on GNOME desktop environments, it is now simply called "Deleted Items". The 'trash can' icon remains intact, however.

On the internationally distributed children's television series Sesame Street, the character Oscar the Grouch lives in a waste container, and sings the song "I Love Trash".

In the late 1980s, a new type of waste container was developed by Veikko Salli in Finland. In this new system, two-thirds of the container is underground. The Molok deep collection system is the original in underground waste containment and has been adopted all over the world.

Collecting waste in a semi-underground container allows for much more capacity in a smaller area. Also, because temperatures are lower underground, there is less bacterial development and therefore, fewer odours and pests.

There are now several variations of underground waste containers that have been developed by competitors. With the original Molok system, at least, the containers are emptied via a reusable lifting bag. The reusable bag is lifted out of the well with a crane and positioned over the collection truck. Once in the correct position, the bag opens from the bottom, emptying its contents into the truck. Other variations utilize disposable bags or a front load collection vehicle.

The benefits of this system are many:

The container has a section for gathering liquids in case of failure, which can easily be pumped out and cleaned.