The Old Town of Vilnius (Lithuanian: Vilniaus senamiestis), one of the largest surviving medieval old towns in Northern Europe, has an area of 3.59 square kilometres (887 acres). It encompasses 74 quarters, with 70 streets and lanes numbering 1487 buildings with a total floor area of 1,497,000 square meters. The oldest part of the Lithuanian capital of Vilnius, it has developed over the course of many centuries, and has been shaped by the city's history and a constantly changing cultural influence. It is a place where some of Europe's greatest architectural styles - gothic, renaissance, baroque and neoclassical - stand side by side and complement each other.

Pilies Street is the Old Town's main artery and the hub of cafe and street market life. The main street of Vilnius, Gediminas Avenue, is partially located in the Old Town. The central squares in the Old Town are the Cathedral Square and the Town Hall Square.

One of the most elaborate architectural complexes is the Vilnius University Architectural Ensemble, which occupies a large part of the Old Town and has 13 courtyards. It was selected to represent Lithuania in the Mini-Europe Park in Brussels.

In 1994 the Vilnius Old Town was included in the UNESCO World Heritage List (No. 541) in recognition of its universal value and originality. The definition of "historic center" itself has a broader meaning than the Old Town, formerly encircled with defensive walls. It embraces the valuable historical suburbs of Vilnius, such as Užupis, which historically used to be outside the city boundaries. Therefore Užupis is often considered a part of the Old Town of Vilnius.

There are more monuments of interest in the Old Town than in any other part of Vilnius; they include: 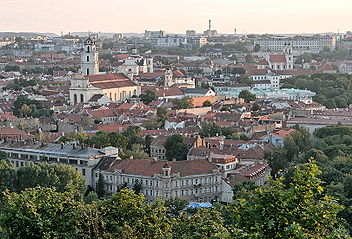 Other places of interest

Panorama of the Vilnius Old Town, visible from atop the Gediminas Tower