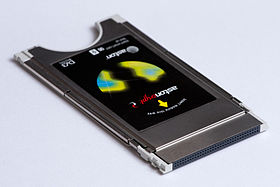 A conditional access module (CAM) is an electronic device, usually incorporating a slot for a smart card, which equips an Integrated Digital Television or set-top box with the appropriate hardware facility to view conditional access content that has been encrypted using a conditional access system. They are normally used with direct-broadcast satellite (DBS) services, although digital terrestrial pay TV suppliers also use CAMs. PC Card form factor is used as the Common Interface form of Conditional Access Modules for DVB broadcasts.

Some encryption systems for which CAMs are available are Logiways, Nagravision, Viaccess, Mediaguard, Irdeto, KeyFly, Verimatrix, Cryptoworks, Mascom, Safeview, Diablo CAM and Conax. NDS VideoGuard encryption, the preferred choice of Sky Digital can only be externally emulated by a Dragon brand cam. The NDS CAM which the Sky viewing card ordinarily uses is built into the Sky Digibox thus not visible. Dragon and Matrix, two popular cams with satellite television enthusiasts are multicrypt meaning each is capable of handling more than one encryption system. Matrix CAMs can be upgraded via the PC Card port in a laptop personal computer whereas a Dragon cam update is done via separate programmer hardware.

The primary purpose of the CAM is to derive control words, which are short-term decryption keys for video. The effectiveness of a CAM depends on the tamper resistance of the hardware; if the hardware is broken, the functionality of the CAM can be emulated, enabling the content to be decrypted by non-subscribers. CAMs are normally removable so that they can be replaced after the hardware security is breached. Replacement of the CAMs in a system is called a card swap-out.

The standard format for a CAM is a PC card which takes a smart card to authenticate, although CAMs with the 'smart card' burnt into memory can be found. In addition, CAM emulators exist for many systems, either providing an interface to allow the use of more than one type of card, or a card not designed for that receiver.